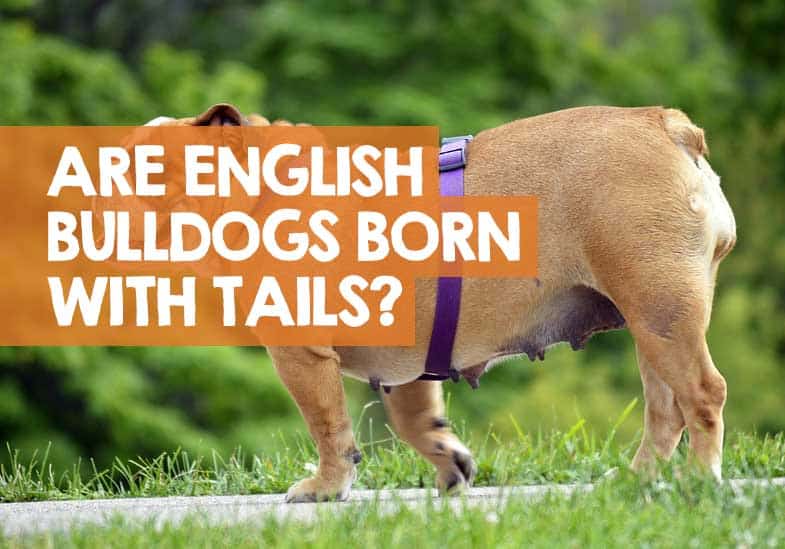 As an English Bulldog owner, we’ve been stopped in the street before and asked whether our boy has had his tail cut off and docked. Tail docking is illegal in the US and UK, and it’s also painful, so no, we didn’t dock our boy’s tail! The next question people will then ask is whether our English Bulldog born with a tail. This article is going to tell you what I often need to explain to people.

If you see an English Bulldog with a curly and wavy tail, then this could be a dog that has been bred with a different breed.

English Bulldog tails are not cropped. That little stubby or corkscrew tail you see on their wiggly rear end is entirely natural.

The reason this question arises so often, with people convinced that English Bulldogs are born with docked tails is because they look so short and stubby. This makes many people believe they have been cut off deliberately for cosmetic purposes when it isn’t the case.

Can English Bulldogs have tails?

English Bulldogs do have tails, but you will see a variety in how they look. Some will either have short tail bobs or not what most people would consider to be a real tail at all.

In truth, all dogs have tails, but some are more visible than others. Old English bulldog tails can be incredibly short, although certain dogs can have medium-sized tails depending on its shape. However, you may have seen an English bulldog without a tail at all. This could be due to their tail being docked for a medical reason.

Are English Bulldogs born without tails?

At birth, most English Bulldogs are born with very short tails, although their length and shape does depend on the type of tail they have.

Although the standard image of a bulldog is one with a very short, bobbed tail, there are actually three different common tail types that your English Bulldog can be born with.

No English Bulldog is the same, meaning that these different tails can come in all shapes and sizes.

Handy Hint: Did you know that English Bulldogs aren’t born with wrinkles and they can appear and re-appear in their first year of development?

Can English Bulldogs have long tails?

In fact, I saw this quote from a breeder on a web forum:

“Many English Bulldogs re born with what is considered a long tail. I am a former English Bulldog breeder. All of my champion American Kennel Club litters had the 3 different types of tails…stub, long and corkscrew. Most people like the stub tails. Only people unfamiliar with the breed will tell you do not have long tails.”

If your English bulldog has a longer tail, then it isn’t anything to be concerned about.

What is tail docking?

I wanted to talk about tail docking a bit more, as it’s a subject I am very passionate about.

Tail docking is a medical procedure to either cut short or fully remove a dog’s tail, for either medical or fashionable reasons (although it is now illegal in many countries for cosmetic purposes).

Because of their history of overbreeding, English Bulldogs can suffer from several different issues, their short tails sometimes being the cause of them. As an English Bulldog grows older, their corkscrew tail stiffens into a tight bun-like shape that can sit tightly against the top of their rump.

If this bun is too tight, however, infections can set in and create sores and other skin issues, as well as general discomfort, with vets recommending docking as a way of preventing future health issues and discomfort for the dog.

Are English Bulldogs’ tails cut off at all?

Because of this, yes, sometimes English Bulldogs tails will be docked, but it should only ever be for medical reasons, and not cosmetic.

Tail docking can be a painful and stressful procedure for dogs and can affect the dog’s mood and even its sense of balance, meaning that discussing the procedure with your vet about its pros and cons is recommended before going ahead with it.

Why would you dock a dog’s tail?

I recently discovered that tail docking isn’t something that is a relatively modern trend. It was actually first seen in the times of the Ancient Romans. I also found that shepherds used to do it in the olden days to help stop the spread of rabies. I am not sure why this would be the case.

Fast forward to more modern times, and hunting dog’s tails were cut off to prevent them being injured during the chase and catch. I understand this one a little better as nearly 14% of working dogs will sustain an injury to their tail every year (see source).

And then we have tail docking for cosmetic reasons where the breeders believe it makes a better-looking dog. It can be done by a vet, or even in a more brutal fashion by wrapping an elastic band around the base of the tail to cut off the blood flow.

Handy Hint: On average an English Bulldog will have 3 to 4 puppies in each litter. Check out this guide to how many puppies they can have.

Does it hurt a dog to have its tail cut off?

You will hear people who agree with tail docking say that when done to a young dog, the puppy’s nervous system has not yet developed enough to let them feel the pain. I’m not sure about that, and defer to the Australian RSPCA who say (view source):

“The basic nervous system of a dog is fully developed at birth. Evidence indicates that puppies have similar sensitivity to pain as adult dogs. Docking a puppy’s tail involves cutting through muscles, tendons, up to seven pairs of highly sensitive nerves and severing bone and cartilage connections. Puppies give repeated intense shrieking vocalisations the moment the tail is cut off and during stitching of the wound, indicating that they experience substantial pain. Inflammation and damage to the tissues also cause ongoing pain while the wound heals. There is also the risk of infection or other complications associated with this unnecessary surgery.”

They also mention that:

“Tail docking can also cause unnecessary and avoidable long-term chronic pain and distress to the dog. For example, when a chronic neuroma forms at the amputation site. Neuromas are often very painful.”

What the law says in the UK and US

In both the UK and United States, tail docking is illegal except with some working breeds. You cannot dock an English Bulldog’s tail for cosmetic purposes.

Here’s a really handy graphic that shows you what countries have laws in place about this unnecessary practice.

As I mentioned earlier, because of the Old English Bulldog’s breeding history, they can often suffer from health issues such as difficulties breathing, skin conditions and hip dysplasia.

One of the more common issues faced by English Bulldogs is their tails. Because of their short length, the curl in their tails can often stiffen into an unmovable ball that is prone to infections within the folds of the skin which are very difficult to clean. This can often be a recurring problem.

Tail pockets are also a less known area of concern with an English Bulldog, being the flap of skin folds beneath the tail, which often collects dirt and grime and can become easily infected if not properly cleaned out.

Other common tail-related issues for Bulldogs include screw tail (infection around the skin folds of the tail), ingrown tails, tail fold dermatitis and intertrigo.

Most of these are caused by the tightness of the skin folds collecting up grime and moisture, resulting in infection and fungal growths.

These conditions can be treated with antiseptic creams, but again may continue to happen until surgical removal of the tail’s infected areas is performed.

What is a tail pocket on an English Bulldog?

While not every English Bulldog has one, many have what is known as a tail pocket, a flap of skin just underneath the tail. They typically become visible between birth and a few months old, remaining there for the rest of the dog’s life.

Like other flaps of skin, tail pockets can often collect dead skin, dirt and other general muck from your dog’s day-to-day activities.

However, because it isn’t in an obvious place, this pocket can often go unnoticed and left to fester until an infection occurs, causing pain and sensitivity in that area.

If your English Bulldog does have a tail pocket, then it is important that you make sure it is kept clean. Your dog might be unable to reach it themselves, meaning that it is often down to the owner to clean it out with some soap and water about once a week.

Cleaning wipes can also be used, with any excess moisture from the wash being blotted away to prevent the remaining moisture from creating an infection itself.

The underside of the tail should also be cleaned, especially if your dog is unable to reach its tail themselves. If you have a regular groomer, mention including cleaning the tail pocket as part of their routine appointment.

If your dog’s tail pocket becomes infected, speak to your vet who will be able to recommend treatments to cure it and prevent others from occurring.

Do American Bulldogs have tails?

However, one major difference between the two types of American Bulldog and the English Bulldog is their tails.

Some American Bulldog tails do curl or kink, sometimes curling up over the back of the dog or being naturally upright.

Again, while these curled tails are not desirable among show-dogs, they are a natural and healthy shape for a dog’s tail and shouldn’t cause them any difficulties.

Should English Bulldogs have tails?

Yes, Old English Bulldogs should have tails, but the size and shape of their tail can dramatically differ from dog to dog.

Dog tails come in all shapes and sizes, with some breeds having incredibly long tails such as Alsatians, Wolfhounds and Irish Setters, while others have such short tails that they are barely visible under their fur.

Short-tailed dogs can be highly fashionable, with some wanting a naturally bob-tailed dog while others have their dog’s tail docked for medical reasons.

Whatever your English Bulldog’s tail looks like, embrace it. It’s part of his personality!

Handy Hint: I have put together a guide to help you understand how to buy an English Bulldog including all the things you need to look out for before you take a puppy home.