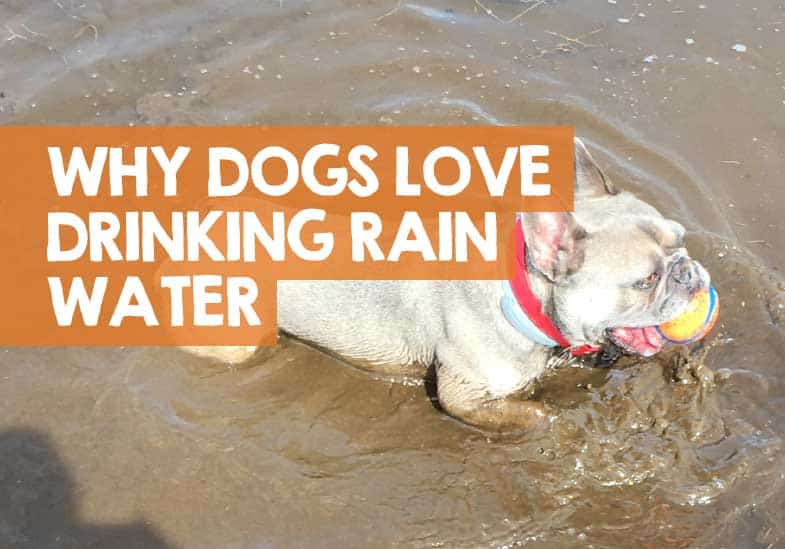 Dogs need to be kept hydrated, especially in hot weather. However, you may have noticed that your dog likes to occasionally drink rainwater from puddles or has become more interested in drinking from them than their water bowls – even when they aren’t hot? But why do dogs like drinking rainwater? Can they get sick from it, and is there any way to stop them drinking from puddles? Let’s find out…

Why does my dog like to drink rainwater? Dogs like drinking rainwater because it tastes so different to tap water which often contains fluoride or chlorine. The difference in taste with rainwater puddles is more noticeable to dogs. Rainwater can smell far more interesting than clean tap water, making them want to smell and taste it.

So that’s the short answer, but let’s look into the science a little bit more and find out why dogs like drinking rainwater so much and whether or not it’s safe or dangerous.

Why does my dog keep drinking rainwater?

While some health scare sites may say otherwise, fluoridated and chlorinated water from the taps in your kitchen is perfectly safe for dogs to drink (with any fluoride and chlorine in the water supply being controlled by very strict guidelines).

However, sometimes your loyal dog will decide that they would much rather drink from a puddle in your garden or on a walk than the water in their own drinking bowl.

This is usually because the water, especially stagnant water, smells way more interesting. It contains dirt and other things that they cannot resist investigating.

Can dogs get sick from drinking rainwater?

Whilst in most cases it is ok for dogs to drink rainwater, and you dog probably won’t get sick, I would exercise a lot of caution. In fact, you might want to err on the side of caution completely and stop them from drinking from puddles. Here’s why…

However, the occasional lap at a puddle is usually okay, there can be certain health risks from allowing them to drink large amounts of outside water.

Microbes, germs and other parasites living in the water can cause diarrhoea and other conditions that can make your dog sick. Because of this, tap water is recommended for dogs as it is cleaned of any microorganisms that could do or your dog harm if ingested.

But for curious dogs who love to drink rainwater outside this could be a big issue depending on where the puddle of rainwater is and what it’s been exposed to.

To conclude, it’s probably not worth the risk, as dogs can get sick so for me, I don’t believe it’s ok to let your dog regularly drink rainwater if you can help it.

My dog drank dirty water: what to do?

You naturally want your dog to be safe, so finding out that your dog has drunk from a stagnant pond, puddle or other unsafe water source can be worrying. In most cases though, your dog should be fine after drinking a small amount of dirty rainwater.

But there are all kinds of illnesses than can be contracted by drinking contaminated water, but what do you do if your dog has already drunk dirty water and you’re worried?

If your dog has actively ingested blue-green algae, it is best to contact your vet immediately or seek out a 24/7 emergency pet clinic. Certain types of blue-green algae can be incredibly poisonous to dogs, causing liver damage and even seizures if left untreated.

Your vet will be able to run tests to find out whether your dog has ingested harmful algae and treat accordingly, with the sooner the diagnosis the better.

If you think you have found an algae bloom, please contact the department of health for your state, which may also have a hotline available on their website. This helps your state track and warn people of any harmful algae blooms in the state.

This is probably quite a rare occurrence though. If your dog has drunk dirty water from a place without algae, then keep a close eye on them over the next few days for signs of illness, discomfort, vomiting or diarrhoea, which could be a sign that the water was contaminated.

If you are worried about your dog’s health after drinking dirty water, call your vet for more information and treatment.

For me, I would always be cautious and would call our vet for advice even with the smallest of concerns.

More on the risks of drinking rainwater

Like all animals, dogs seek out water to drink when they are thirsty and, unfortunately, when outdoors this water can come from a few unsanitary places, including puddles.

While the water itself can be clean when freshly fallen, the ground that puddles collect on isn’t, collecting dirt, leaves and dead insects and can sit from hours to days, depending on the weather.

Bacteria that live in contaminated water includes E. coli, Giardia and Campylobacter. Drinking from stagnant pools and puddles also carries the risk of your dog contracting leptospirosis, a bacterium that can be found in water that other animals, such as rats, have urinated in.

Did You Know? Dogs can also develop lungworm from drinking from puddles. There is a parasite that is found in slugs that can get into dirty water and infect your dog. Read more in my guide to slugs being poisonous to dogs.

This disease causes abdominal pain, diarrhea and can also cause kidney failure in worse cases, however, there is a vaccination available for your dog which is recommended especially if your dog is a keen swimmer or insists on drinking rainwater from puddles or dirty water from stagnant ponds.

My dog is drinking pond water

Stagnant ponds suffer from the same problem as puddles, but on a larger scale as they do not evaporate and continue to collect all kinds of things in the water.

If your dog enjoys swimming, make sure it is in a freshwater source that doesn’t contain large amounts of blue-green algae. You should also avoid letting your dog swim in canals and ponds in areas that you do not know very well, for their own safety as well as the water quality.

If your dog has had a swim when out on a walk, when you get home it is important to rinse them off, either in a bath or with a hose, to get rid of anything they may have picked up in their fur that they may lick off later when cleaning.

If you notice your dog acting unusually or is feeling unwell after swimming, take them to see your vet as soon as possible.

The dangers of giarda

Giardia is a single-celled parasite that can affect both humans and animals, causing when it commonly known as “traveller’s diarrhoea” and “beaver fever”. It’s found in rainwater.

Infected dogs can suffer from vomiting, nausea, diarrhoea and abdominal pain, and dogs suffer from much the same symptoms. This is caused by the parasite attaching itself to the wall of the intestine to feed, with larger numbers of them causing clinical signs of damage to the wall, before passing further infectious cysts into their stool to infect other animals.

If untreated, Giardia can prove fatal in both puppies and adult dogs if their immune system is immature or compromised.

This means that if you have noticed your dog suffering from stomach upset, vomiting or watery diarrhoea after drinking rainwater, visiting your vet is highly recommended for diagnosis and treatment.

Is it okay for dogs to drink pool water?

Many American homes have outside pools, especially in hotter states, and this means that your dog is next to a very large open water source. But is it safe to allow them to drink from a swimming pool?

No. Pool water is chlorinated to prevent bacteria and other germs from contaminating the water, and while that makes it safe for you and your family to swim in, allowing your dog to ingest large amounts of chlorine can be incredibly bad for them.

While tap water can also contain chlorine, this is kept under strict restrictions that means that the amounts aren’t high enough to be harmful to people or animals, but pool water has a much higher concentration.

Like people, drinking too much pool water can cause your dog to have an upset stomach and nausea, depending on how much chlorine is in the pool, but an occasional drink won’t really cause your dog much harm.

However, it can cause some health issues if your dog consistently drinks from the pool as its main source of water, so if your dog likes to guzzle down large amounts of pool water they should be discouraged and kept away.

Handy Hint: You should keep newborn puppies away from any type of drinking water until they are at least 4 weeks old.

How to stop dogs from drinking puddles

And finally, how can you stop your dog from drinking puddles and rainwater?

If you are worried about your dog continuing to drink puddles and other sources of outside water, there a few ways to prevent this.

Sometimes their search for water is because they are thirsty, especially on warmer days. This can be helped by carrying some water for your dog with you when on walks. Many dogs are quite happy to drink straight from the bottle (although some may need to be trained not to require a bowl), which will quench their thirst and stop them seeking out water elsewhere.

Your dog may also simply be curious about the water, intrigued by its smell and wanting to investigate it further. Stop them from drinking rainwater by gently but firmly pulling them away, as well as training them to know not to drink out of puddles.

Positive reinforcement is often the best way to go with training, with dogs learning that leaving things like puddles alone earns them praise and rewards before becoming second nature.

Also, if you have some outside water bowls, do not allow them to drink from them if they have collected rainwater during the day. When allowing your dog out, empty the water, rinse it off and refill with fresh water from the taps.

Many dogs love to drink rainwater and in most cases they should be ok. However, there are dangers and risks, so my advice is to not let them drink from puddles at all.

If you are worried in anyway, seek the advice of a professional.