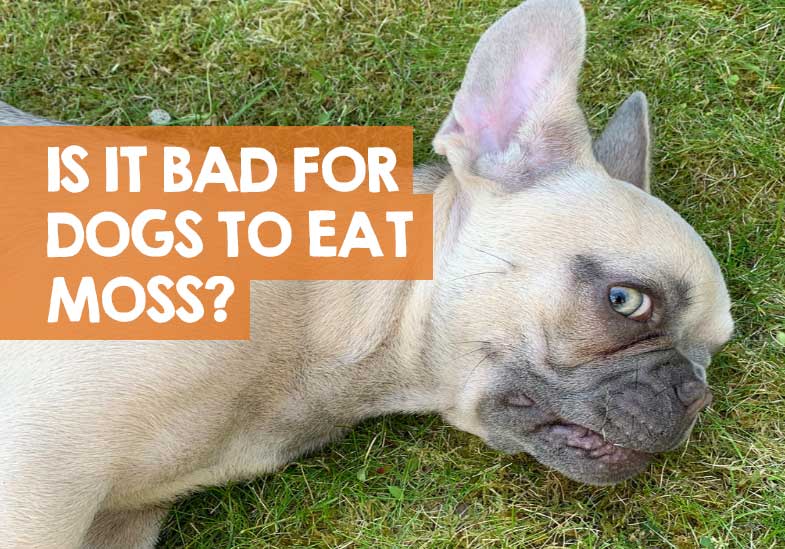 As dog owners we all know that if you let a dog out of your sight when outside, there’s every chance they will eat something they come across. And talking of the outdoors, it’s not uncommon for dogs to like eating moss. But why would a dog eat moss, and is it bad for them or will they get sick?

In this short guide I am going to explain why dogs like eating moss, whether it’s toxic, and how you can stop them from doing it in the first place.

Is moss poisonous or toxic to dogs?

Whenever I take my dog Claude out on a walk, he has a habit of munching on any moss or grass he can find. Although it is a completely normal behaviour pattern, it can be very worrying if your dog eats something outside.

You are right to be concerned that something they have eaten could carry bacteria, diseases, or, worst of all, poison. But don’t be too alarmed…

Is it bad for dogs to eat moss? The majority of moss is completely non-toxic, so eating moss won’t do your dog much harm. At worst, certain types of moss like peat moss could cause mild gastrointestinal irritation. If your dog keeps eating moss, don’t worry too much.

It is worth bearing in mind that other external factors like pesticides on the moss or poisonous plants nearby means that eating moss might still make your dog sick.

Keep on reading as I can tell you all you need to know about whether or not your dog eating moss has the potential to be harmful, toxic, or poisonous.

If you have ever wondered why your dog keeps eating moss, then let me explain. There are many reasons why dogs eat it; some behavioural, others instinctual. Here’s a run-down of the reasons.

Some experts believe dogs like eating moss because there is something about the appearance, taste or texture that appeals to them and makes them want to keep eating it.

If you have ever seen your dog run on snow, you will have noticed how excitable they get. It’s all down to it being a different experience, and the same applies with moss.

Some research, albeit limited, has also suggested that there might be some vitamins or minerals in moss and grass that aren’t present in commercial dog food.

Handy Hint: Did you know that dog pee can kill your grass. It is actually more of an issue with female too. Read more about what you can do about it in the guide.

Dogs are descended from wolves and coyotes, and research has shown that as well as hunting for prey, wild canines also ate grass, leaves, moss, berries or other plants they found in the wild.

Therefore, it is reasonable to assume that for the domesticated dog, there is something instinctual about eating moss and other plants and natural produce.

3. It is the result of pica, an underlying medical issue

Another reason for moss eating could be that your dog has a condition called pica (see PetMD.com). This is a medical issue that causes them to crave and ingest non-food items.

Common examples of things dogs with pica will eat include cloth, metal, paper and even faeces. Eating moss may well be a further manifestation of this condition.

Pica is described as a psychologically compulsive behaviour issue for most dogs, and if you suspect that your pet has this condition, it is best to bring them to a specialist trainer or vet to help them get out of that behaviour.

Pica can also be an indication that they aren’t getting the sufficient vitamins, minerals and nutrients they need in their current diet.

Some dogs like eating moss because, quite simply, it gives them something to do. If your dog isn’t getting sufficient exercise, interaction and stimulation, they might end up being bored and have a lot of pent-up energy that they need to expel somehow.

This can manifest itself in them eating anything they can get their teeth around.

Having a lot of pent-up energy, they need to expel is especially true if your dog is a puppy or an adolescent. Beyond that, if your dog is still young and hasn’t come across something like moss before, they might eat it because they’re curious and simply don’t know what else to do with it.

It’s just like babies. Don’t know what to do? Put it in your mouth!

What are the risks of my dog eating moss?

I now want to just explore some of the specifics around certain types of moss, and what risks if any there could be to your canine friend.

Is green moss poisonous to dogs?

The most common moss your dog will come across will be the green variety that you might have in your garden of yard. So, is this toxic, poisonous, or bad for your dog?

Is green moss poisonous to dogs? Green garden moss in itself does not harm any dog or pose any risk if eaten. It isn’t considered toxic or poisonous, so if your dog eats green moss, you shouldn’t worry too much, unless the plants have been sprayed or treated with chemicals.

If you suspect that the moss has come into contact with harmful chemicals such as pesticides, these can cause gastrointestinal issues amongst other things.

These are both classic examples of where it is bd for dogs to eat moss. It’s not the moss itself, but rather the environment it’s in.

Although gastrointestinal problems can be treated at home, it is always best to keep your vet in the loop. However, poisonous plants and certain mushrooms can put your dog in serious danger.

If you suspect they have accidentally eaten a poisonous plant alongside the moss you should take them to the vets as a matter of urgency.

It’s always best to err on the side of caution.

Handy Hint: The popular spider plant will often be chewed by your dog. But just how toxic is this common house plant and how careful should you be?

Is peat moss toxic to dogs?

Peat moss is partially decomposed sphagnum moss (see what it looks like on Wikipedia). It’s popular with gardeners as a type of compost to help plants retain moisture. Due to its use to gardeners, peat moss is usually sold commercially.

For the most part, however, it is not listed as toxic.

So, is peat moss toxic to dogs? Although it is not toxic, peat moss can and does act as an irritant for dogs when eaten due to its production and interactions with harmful chemicals. It can irritate a dog’s breathing, skin, eyes, and a digestion.

Let’s look at those possible risks of peat moss below.

Fresh peat moss is a breathing irritant and can have a negative impact on your dog.

If you have just planted something in your garden with peat moss, it might be advisable to take your dog round the block to go to the toilet rather than your garden and take them to the dog park to play instead in order to limit the chances of their breathing being adversely effected.

In simple terms, if you think there could be come fresh peat moss in the atmosphere (for example, you have just put some down yourself), it is good to limit your dog’s exposure as much as possible.

If your dog ends up running, playing or rolling in peat moss, you should be aware that this can actually lead to skin irritation and inflammation, which can make your dog feel uncomfortable.

Therefore, if you see or even suspect that your dog’s skin has come into contact with peat moss, it is recommended that you thoroughly rinse your dog’s skin and coat with fresh water.

Handy Hint: Does your dog like jumping in leaves? Find out why they love doing this so much, and what the risks could be to their health in my guide to dogs and leaves.

If peat moss enters your dog’s eyes, it can cause not just irritation, but also infection. If you suspect your dog might have gotten peat moss in their eyes, open one eye at a time and rinse well with dog eyewash, saline solution or fresh, clean water.

Do this with each eye in turn until you are confident the peat moss has all been flushed out. If this isn’t an option, see a vet as soon as possible.

Although, as mentioned, peat moss in itself is not toxic to dogs, but it can cause stomach upsets for them. This can lead to some of the usual symptoms of stomach upset like vomiting and diarrhoea.

If you suspect peat moss is the cause, consult your vet for further care advice.

How do I stop my puppy or dog from eating moss?

And what about puppies? As you will know, these guys love to eat anything and everything as part of their curiosity and teething stages.

If you’ve ever had a dog, you’ll know one thing: they eat everything and anything. Often, you’ll find them drinking out the toilet, running away with your dinner or eating something unsavoury in the garden!

Although seeing your dog eat a foreign substance like moss can be concerning, you can be assured that nothing too sinister will happen to your dog even, in the worst-case scenario that they do end up eating moss.

Just make sure you keep your vet in the loop!

Handy Hint: There are other potential risks also in your garden. For example, slugs can give dogs lungworm! But what about the fuchsia plant? Can dogs become ill from fuchsia berries and seed pods?