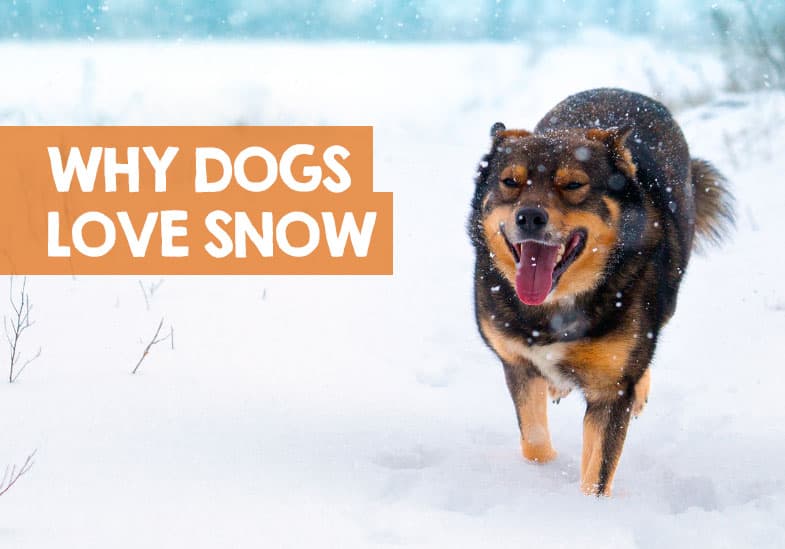 Watching your dog bouncing around and rolling in the snow like a young puppy again is as heart-warming as you can imagine. In fact, if you scroll down you will see a video of my own dog rolling in snow and absolutely loving it!

But what is it about the white and cold stuff that appeals to our four-legged friends so much? I decided to research it, and see what the reasons are for why dogs love snow so much.

Why do dogs love snow?

As they leap through the drifts, stopping only to roll around to make doggy snow angels, you might be wondering just what it is about the snow that causes your dog to love rolling in snow so much.

Well, here’s five different reasons as to why a whiteout causes so much excitement. Right at the top of the list is the main reason, and that’s simply that our dogs find it so much fun to run and roll around in!

Most of our dogs are eternal puppies, loving to play and investigate new things well into adulthood. So, the arrival of snow and the whole outside becoming a brand-new play park is going to cause some excitement.

Our dogs also love to use their noses to investigate their surroundings, and once everything is covered in snow, the smell of their world changes too. That means that everything now needs checking out all over again.

But if you’re still thinking, ‘but why is it fun?’ Well, if you’ve ever enjoyed running or rolling through the waves or across the sand of a beach, you’ve probably never considered why you enjoyed it so much.

And that’s just the same for canines, and why dogs love snow so much; it’s just a fun experience, particularly to roll in it!

2. Dogs love snow because we encourage them to

Whenever there is a positive outcome to something that our dogs do, it encourages them to do it again.

Remember teaching your pup how to sit or to give a paw, you probably gave them a treat or had a game with their favorite toy to reward them? This will encourage them to repeat that behavior again.

Well, for some dogs, the ultimate reward is getting our attention, and when we laugh as well, our pups love it. So, whether we praised them for walking nicely on a leash or laughed as they ran through the snow, if they got our attention, then they’re probably going to do that behavior again.

And who can resist laughing when our dogs are doing their very best Bambi bounces through the snowdrifts and rolling through snow like mad?

Being out in the snow is often very social too, with snowball fights and snowmen being built.

Dog’s love being around their family and everyone outside with them having a good time is their idea of heaven.

3. Dogs like walking in snow due to how it feels

Professor Hiroyoshi Ninomiya and his team from the Tokyo Yamazaki Gakuen University discovered the reason why our dogs can stand and walk on snow without seeming to get uncomfortable from the cold (view source).

of small veins, acting as a heat exchanger.

So, as the warm blood arrives in their paws, the heat is transferred to that network of veins, which means that the pad stays warm before the blood is then circulated around the rest of the body. Antarctic penguins have the same system in their legs and wings!

Professor Ninomiya does point out though, that how long a dog can stay comfortable in the snow does vary from dog to dog and between the breeds. So do make sure that your dog is not getting too cold even if they’re still having fun.

Not just that though, dogs love walking in snow because of how it feels to their paws. It’s an unusual sensation that they are not used to. It’s the same reason for dogs that love to roll in snow… it feels weird, yet appealing!

4. Dogs love snow because it appeals to their nature

Dogs are predators who, given a chance, will hunt for their own food. We also know that predators like change in their environment.

Meanwhile, prey animals much prefer things to stay the same. That enables them to predict where the dangers are and to have their escape routes all planned out.

So, when our dogs wake up in the morning and find that everything suddenly looks very different, there are delighted to have the chance to investigate this new world full of white snow.

5. Dogs love playing in snow as it’s like a new plaything

Most dogs love being given a new toy, so suddenly having the whole yard covered in a new toy must feel like the best present ever!

Now there’s the chance to roll in it, toss it up in the air, pounce in it, and dig right down to the frozen ground underneath.

Why do some dogs hate snow?

Just as some people love the snow and some hate it, our dogs are much the same. It’s not unusual to find that dogs with thin coats are at the top of the list for their dislike of the white stuff.

It’s said that dogs like Greyhounds, Hungarian Vizslas, and Dobermans are all in the short coat category and are well known for their dislike of cold conditions.

For these guys, you might find that when they have a warm fleecy coat on, then they might suddenly find it a bit more fun to be out and about.

The other type of dog which often dislike snow are those who are a bit short on the leg side. So, Basset Hounds and Dachshunds are two key examples of breeds that might find even a few inches of snow to be too cold on their tummies.

Whilst researching this guide, I also found that people were asking other questions about their dogs and the snow. Here I attempt to get the bottom of those issues too.

Can dogs smell in the snow?

You might also wonder whether tracking and hunting dogs are able smell scents in the snow. I referred to an article on the LA Times for this one; here’s what the said when considering whether dogs can smell in the snow.

“In following the scent of a trail, however, snow can be a double-edged sword. Colder environments have fewer smells than warmer ones, making them olfactorily less “noisy” for a dog’s sensitive nose to pick out the right scent. The low level of available scent is difficult for the dog to detect.”

So, whilst dogs can smell in the snow, they cannot smell as well as if there wasn’t any snow present.

Dogs will often eat snow because they are dehydrated.  Other dogs might like to eat snow simply because it’s a different sensation to usual. It could even be a medical issue.

If your dog likes to eat snow a bit too much, and makes a habit of it, check in with your vet.

How to keep your dog warm in the snow

Even if your dog is one who loves being out in the cold, there are still some precautions to take to make sure that they’re kept safe and well during the winter months.

Get them a doggy jacket

We all appreciate feeling warm and snug, and for older dogs or those with thin coats, it’s no different.

The opportunity to go out for a walk in a warm fleece or to be wrapped under in toweling drying coat once home will make all the difference, especially to older dogs who may be getting a little achy in their joints.

Here’s one I recommend on Amazon.

Check your dog’s paws for snow

Your dog’s paws can take a battering in the snow and colder weather, so make sure you check them regularly for any signs of cracked paws or bleeding.

It’s also a good idea to rinse off their paws with warm water after coming in from a walk. This ensures that if they have walked through any ice melt chemicals, they don’t then ingest it when cleaning their paws.

If the weather is too cold for you to go out in, then it’s probably the same for your dog! Apart from a quick nip outside to relieve themselves, then your dog may well be much happier inside for the day.

A tasty, long-lasting chew can be a great way to keep them occupied during the day.

Alternatively, you could teach them a new trick or even hide treats around the house for them to find.

Bring your dog in from the snow and cold

If your dog normally lives outside, do consider bringing them into the warmth of your home when the temperatures drop to subzero temperatures.

For the rest of the winter, you need to provide a warm and snug shelter facing away from the wind with thick bedding to lay on.

Don’t forget to make sure that water bowls are free of ice; your dog needs to keep hydrated in all weather conditions.

Handy Hint: Here’s a more comprehensive guide I wrote about keeping a dog warm during cold weather spells. It’s for a Shih Tzu, but applies to any dog breed, particularly smaller ones.

I’ve never met a dog who does not love rolling in snow. You can see a video of my own doing it further up the page.

If you’re experiencing cold weather at the moment, the following guide could help you make your dog more comfortable.

link to Why Does My Dog Sleep on Top of Me at Night?

Dog owners often talk to me about the strange habits their mutts have developed. This week was no different with a lady in Ohio explaining how her dogs loves to sleep right on top of her in bed. My...

Continue Reading
link to Why Does My Dog Follow Me and Not My Husband?

The following guide was written by a female friend of ours who has seen some strange behavior recently from her dog. It seems to follow her about everywhere, but not her husband. If you’ve...