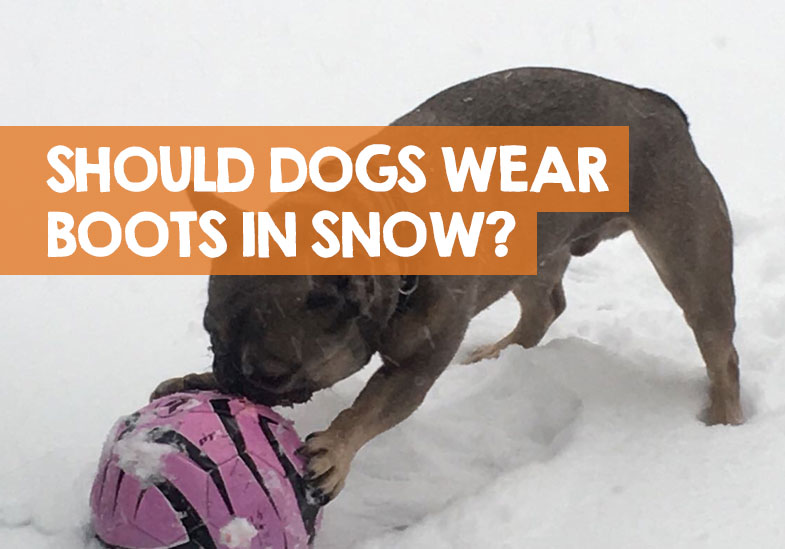 In very cold weather, your dog’s paws are at risk. This can include hazards such as dryness, cracking, and frostbite. Dogs can also slip on snow and ice during the winter months. Bearing this in mind, it raises the question of whether dogs should wear boots in winter.

Should dogs wear boots in snow? I don’t believe dogs should wear boots in snow and winter. Dogs will find snow boots or shoes uncomfortable and unnatural, and their paws have evolved to be able to cope with snow, ice, and frozen ground if it’s not extreme cold, in which case you shouldn’t take your dog out.

However, this is purely my opinion on whether dogs need boots in winter. Other owners will disagree with me. So, for fair balance, here’s a guide to whether dogs should wear boots in the snow, and if you decided to buy some, what you need to know.

Do dogs need boots in winter?

The skin on a dog’s paw pads is the thickest on its body, and much tougher than that on the soles of human feet. It will become rough, textured and even hardier when consistently exposed to a variety of surfaces… including snow and ice.

As children, we often ran barefoot with great glee, regardless of the season or the surface. Our feet became tough. When summer comes round, and your feet emerge from your winter boots that sense of childhood freedom returns.

But for the first few days our softened soles remain sensitive to what is underfoot. The same thing happens to dogs that are still young or are not constantly exposed to outdoor excursions.

While your dogs’ paws are acclimatising to cold weather or if the conditions are sufficiently hazardous, some believe that boots or sandals can prevent injury and discomfort… and it’s true, dogs can wear boots in the snow to help protect them from harm.

But, as I mentioned, I am not an advocate of dogs needing boots in winter. But some people do think they need them, and here’s why.

Why should dogs wear boots in the snow?

1. The potential harm of asphalt in winter

A brisk winter walk is bracing and refreshing but bear in mind that the ground temperature is probably a few degrees cooler than that of the air above it. Heat rises, so your dog will be walking in colder conditions than you.

If the weatherman states that the prevailing temperature is around 40º F, your dog will be walking on a surface close to freezing point, and a prolonged outing could damage its paws.

Once the air temperature dips to freezing point or below, a tar or concrete surface will become treacherous for both you and your dog, as it becomes icy and slippery. These conditions are compounded if it has been raining or snowing.

You could consider fitting your dog with winter boots to help with traction on snow and ice so you can enjoy your walk.

2. Salt and other chemicals

Another feature of urban life, during harsh winters, is the spraying of salt and other chemicals to prevent ice from forming on the roads.

Rough salt crystals can cause minute lacerations to your dog’s paws. Fortunately, few of us have experienced having salt rubbed into a wound, but the pain is legendary. Even when melted into moisture on the ground, salt can cause dryness, cracking and even burns.

The effects of other chemicals used can be equally unpleasant, so it is best to keep your dogs’ paws from encountering these nasties – dog snow boots could be the answer.

The use of chemicals is not limited to urban settings. Often weed killers and other toxins are used by farmers, park managers and commercial nurseries. These could find their way onto your dog’s paws.

Dogs tend to lick their paws or other parts of their bodies when they sense an irritation. This will result in the dog ingesting the chemicals, resulting in unknown, usually negative side effects.

Your dogs may benefit from wearing boots in the snow if you walk them often in agricultural areas or large parks, or if you are travelling to an area where the chemical conditions are not known to you.

3. The hazards of snowy conditions in winter

Most dogs delight in running free and rolling around in a few inches of snow. Unfortunately, some dogs, especially those with long, curly fur, will be adorned with snowballs if they stay out too long.

These occur when the snow melts from their body heat and refreezes forming small balls of ice close to the skin. If left for too long, these can cause skin irritation and even frostbite.

If a dog has fur growing between its toes, ice balls can form there and cause damage to its paw pads. This can occur even if there is a small amount of snow on the ground.

If snow is a common occurrence in your area, keep the hair on your dog’s feet trimmed and consider covering their paws in snow boots on your walks.

4. The hazards of muddy conditions

There is a fast-acting medical condition, known as Alabama Rot, that affects dogs and is often fatal. The official name is cutaneous and renal glomerular vasculopathy or CRGV.

It was first identified among the greyhound racing fraternity in the USA but has become prevalent in the United Kingdom, and is also known as Mud Island.

Alabama Rot has been linked to dogs walking in mud during the rainy season. It is unknown whether the disease is caused by a parasite or E.Coli bacteria. It causes blood clots which result in skin lesions and, if left unchecked, attacks the kidneys.

In the past decade there have been almost 300 cases, with approximately a third of those dying from the disease. The condition is not infectious, like Parvo virus, but seems to be limited to outbreaks and can move from one pet to to another within a household.

Washing your dog’s paws after each walk does not appear to be enough of a preventative measure. Only waterproof boots will stop contamination.

Service dogs, and those involved in rescue work and law enforcement, often wear boots in snow and winter for support because they spend long hours on their feet and have to navigate unpredictable terrains.

If your dog regularly accompanies you on long hikes, particularly on rocky or uneven surfaces, consider investing in canine hiking boots to make the outing more enjoyable for them.

6. When dog walking on slippery or cold indoor surfaces

If you live in a modern dwelling with laminated surfaces or in an old, cold, dank castle that looks like the set of Wuthering Heights, spare a thought for how your dogs cope on these unusual surfaces.

Senior dogs, especially, will benefit from some help in navigating slippery and cold surfaces. There are various forms of socks, sandals, boots, and paw pads that could make movement more manageable for them.

7. Due to health conditions

If your dog has seasonal allergies, for example reactions to pollen or grass, boots may go some way towards preventing them from picking up these allergens on their paws, and licking them afterwards.

Boots can help protect an existing injury to your dog’s paw or paws from becoming inflamed. Recovery boots can be used after surgery to protect a dressing or to prevent your dog from licking or scratching a wound and making it worse.

Much like working and service dogs, senior dogs could also benefit from the joint support afforded by a good set of dog boots or sandals.

If you have decided that your dog should wear boots in the snow and winter, then here are some of the highest rated ones available on Amazon – click the images (or this link).

As you can see, winter snow boots for dogs are available in a range of styles and colours and are much more than just a fashion statement or a way to keep your home clean.

They can make a real difference to your dogs’ health and comfort at home, while working or on outdoor adventures. Extreme weather, toxic environments and harsh surfaces can take their toll on your dogs’ paws.

Dog boots can be waterproof for wet and muddy conditions, or breathable and porous for warm days. Alternatives include sandals, and even socks for stay-at-home dogs.

Modern designs are easy to put on and remove, outfoxing even the most dramatic of dogs. This attention to footwear also gives you the opportunity to check the health of your dogs’ paws, a routine that is often overlooked.

Should dogs wear boots in summer?

On hot summer days, it becomes hot enough to fry an egg, and at 120º F, tar melts. These temperatures will certainly cause your dog’s paws to redden and even blister.

A rule of thumb is: if you find it uncomfortable to hold your hand on a surface for 7 seconds, your dogs should not be walking on it. They should not be standing on hot surfaces for any length of time, unshod, while you chat to your greengrocer.

Either, wait until the temperature drops to take your dog for a walk, or protect your their paws in some way. As the saying goes, “Only mad dogs and Englishmen go out in the midday sun”.

To conclude, It’s up to you whether your dogs wear boots in cold weather. I don’t believe dogs should wear boots in the snow, because no dog should be walked in temperatures lower than -10°C (14 F).

In cold temperatures above that, dog paws should be fine, but not indestructible. Instead dog snow booties I recommend you apply petroleum jelly-based products on their paws.

When you create a jelly barrier like it will stop snow, ice and any of those chemicals I mentioned earlier from getting into the cracks on their paws.

I also recommend you keep the fur tidy as snow and ice won’t be able to cling to shorter hair as it does on longer hair.