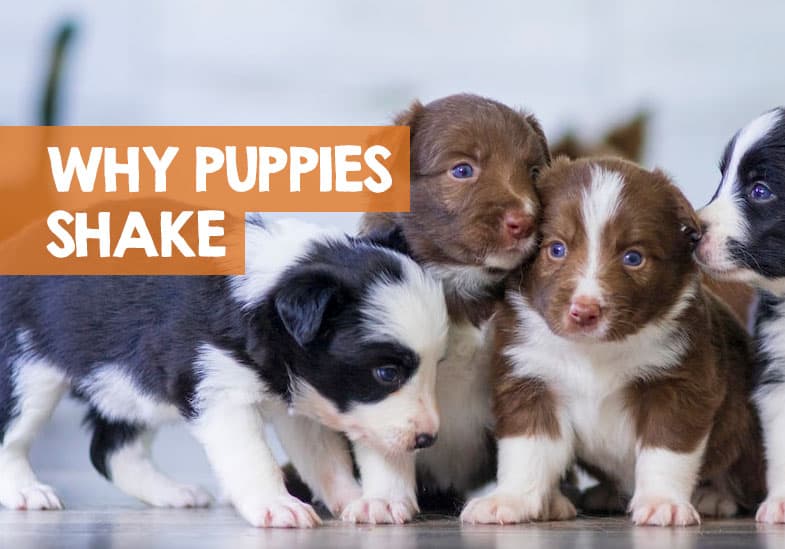 If you’re a puppy parent, you’ve likely lost count of the times you’ve seen your puppy shake for seemingly no reason and got concerned. Wonder why this happens? This post will explore all the possible reasons behind your lovely furry friend’s shaking.

So, why do puppies shake anyway? There are many reasons why puppies shake. It may be out of excitement, fear, attention, discomfort, or illness, among many others. In most cases, the shaking isn’t a cause for alarm. But when sickness or pain is involved, you shouldn’t take the shakes lightly.

Want to know all the potential reasons why puppies shake? Keep scrolling to find out. I’ll also tell you more about the illness-related shaking so you’d know when to see a vet visit.

As a puppy owner, you’ll agree that certain habits we observe from our young canine companions leave us worried and confused — like shaking every now and then.

They do it while sleeping, eating, when you lift them..… basically in the least expected circumstances, making you question why the shaking happens in the first place.

Almost every puppy parent has a “puppy-shaking story.” It’s common in puppies, and not every shake means something’s wrong with your cherished furry pal.

Most times, the shaking is pretty harmless. Let’s explore some of the common reasons why puppies shake:

It’s purely out of excitement

Have you noticed your furry friend shakes during mealtime? Whenever you carry them after coming home from work? When you’re about to take them for a walk? Or while playing?

That, my friend, is an excitement shake.

Sometimes, a puppy may be filled with so much joy and eagerness. They simply can’t contain it.

They might shake as they scarf down their favorite meal, participate in an activity they love, or when you — their human best friend — pick them up.

As long as the shaking lasts briefly and they act like their usual self a few moments later, you have nothing to panic over.

But if the shaking comes with other unwanted behaviors like excitement urination, it’s a good idea to consult a behaviorist to get things under control.

Some puppies shake when overcome by fear or anxious thoughts.

Your puppy’s fear comes in many forms. Maybe the sound of fireworks or your vacuum scares them like crazy. Or being picked up by a guest they’ve never met makes them anxious.

If your puppy seems to tremble when a visitor holds them, socialization training can greatly help. They will become more confident around a “touchy” guest.

On the other hand, sound training will help them get used to noises that normally freak them out and make them shake.

If your puppy is in fear, their shake may happen simultaneously with fear-like behaviors such as licking their lips non-stop, pacing, or avoiding eye contact.

And if you’re furry friend isn’t yet comfortable being held up by anyone — including you — they might shake in fear (and display the fear-like behaviors).

In this case, here’s how you can fix the situation:

Over time, you will notice they no longer shake out of fear whenever you lift them. Instead, they may shake out of excitement.

They’re having an exciting dream (or nightmares)

Experts say that our four-legged friends dream when sleeping.

If your puppy makes a quick shake while snoozing, it’s likely that the fierce dog next door is chasing them in their sleep. Or that they’re enjoying chasing butterflies in their dream.

Besides the shaking, expect to hear soft whines or leg movements here and there if they’re having a horrifying dream.

Our young canine pals tend to lose body heat quicker than full-grown dogs because of their small bodies. So when it’s cold, your puppy can’t control the shaking since that’s their body’s automatic response to the chilly weather.

The shivers are simply muscles contracting and relaxing rapidly to make your puppy’s body warm up.

And since the shaking alone can’t meet all your puppy’s warmth needs, the whole body trembling will persist until you do something to keep them warm — Like letting them wear a dog sweater.

Sometimes, your puppy may shake so that you’d notice them.

Shaking can become their go-to ticket to winning your attention if they realize you often walk up to them whenever they start to tremble.

Even minor reactions like staring at your puppy as they shake can make them believe that shaking is what they need to do to grab your attention.

This type of shaking lasts briefly. Your puppy should still look okay after their shaking stunt.

To shake off the bugs

If your little canine pal feels itchy because of insect bites or external parasites like fleas, they might shake vigorously to get rid of these nasty little bloodsuckers.

Apart from the frequent shakes, your puppy will also exhibit some telltale signs of insect bites and parasite infection — constantly scratching or biting their body, red pimples, and so on.

It’s advisable to speak to your vet if your puppy’s shaking suggests they’re dealing with parasites or a sting.

Trying to dry up (and get dirt off)

After enjoying some time in the pool or after a bath, it’s common for puppies to vigorously shake off the excess water from their body.

Maybe a towel doesn’t get the job done well enough, so your puppy resorts to what they know best — “shake-when-wet.”

This may also happen if they’ve been rolling in dirt and want to remove particles trapped in their coat.

They have discomfort in the ears

If there’s something stuck in your puppy’s ears — like a bit of water after spending time in the pool — you will notice your dog shaking their head more than usual. They will also shake their head regularly if they feel some sort of pain in their ears.

You should speak to your vet if the head-shaking persists for days.

It’s part of their morning routine

Puppies love to shake after waking up, maybe so they’d start their day on the right note. Think of these morning shakes as your puppy’s version of morning stretch.

They suffer from an illness

As I said a while ago, not all puppy-shaking episodes are harmless. Shaking is often one of the major symptoms of certain conditions affecting puppies.

There’s one genetic condition known as shaking puppy syndrome (yes, you read that right) that leads to persistent body shakes, among other symptoms.

Other health problems that can make puppies tremble a lot include:

The surest way to know whether an illness is behind your puppy’s frequent body tremors is to observe their behavior after shaking. Talk to your vet immediately you spot symptoms like :

Also, if your puppy’s shaking has been mild for a while and then suddenly becomes repetitive (and in great intensity), make sure to see the vet so they can determine the underlying problem.

Why do puppies shake when sleeping?

Puppies shake when sleeping because they’re having either exciting or horrifying dreams.

Why do puppies shake when you hold them?

As discussed earlier, some puppies shake when you hold them because they are super happy or afraid of being picked up.

Why do puppies shake when they eat?

The common theory is that puppies shake while eating because they are extremely excited about mealtime.