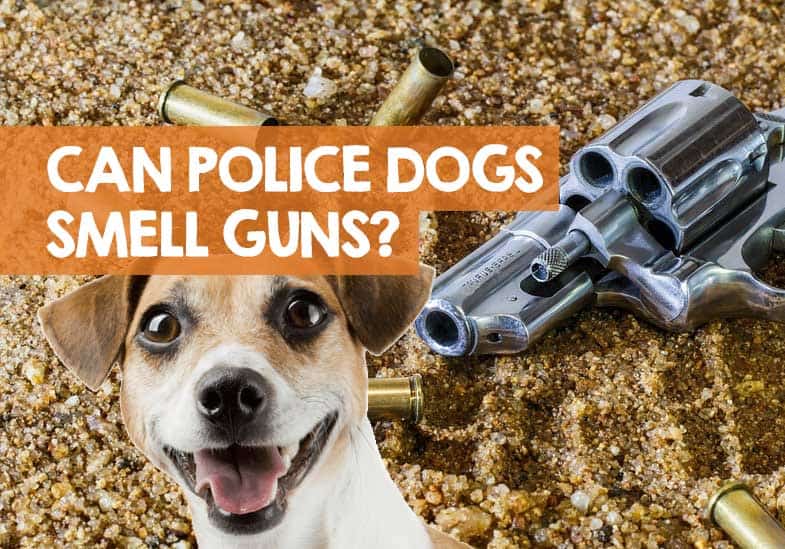 Dogs are renowned as having an exceptional sense of smell, being used by police and customs to detect narcotics and even bombs. But just how advanced is their smell sense, and is it possible for police dogs to detect guns? I decided to find out…

Can dogs smell guns and firearms? Police dogs are able to smell firearms and guns if they have been trained to do so. However, a typical dog would not be able to smell a gun if they passed someone in the street who had one.

To summarize, it’s possible for trained police dogs to smell firearms, and they are sometimes used to keep schools, airports, and event venues safe from guns.

How do dogs smell guns or gunpowder?

Dogs have very sensitive noses and can smell far better than humans can. A dog can have more than 100 million nasal sensory receptor sites, while humans have around 6 million.

It has been estimated that dogs can smell anywhere from 1,000 to 10,000 times better than we can.

This gives them a huge advantage, and means it’s possible to train customs, border force, and police dogs to smell and detect for guns if required.

How exactly can dogs sense guns then?

A study published in the Journal of Comparative Psychology revealed significant findings of how a dog tracks by smell. The study showed how dogs track by the smell and not by the actual object.

For example, dogs were given the scent of their favorite toy, but when they reached it, they found a different object. When they arrived, they hesitated, indicating surprise that it was not the object they thought that they were tracking.

Then they continued tracking to find the toy they were originally searching for. This incredible sense of smell is what makes it relatively simple to train a dog to sniff out firearms.

The dog is not necessarily smelling the gun itself; they smell the gunpowder residue on the weapon. The most ideal situation for detecting the gun is if it had just been discharged a few hours ago.

This is when the scent is the freshest, and the dog can track it more effectively.

However, dogs are also able to find guns that haven’t been shot in months, it may just take them longer to do so.

In addition to this, dogs are also able to detect when a person is anxious or stressed. This is due to our increased heart rate and the surge of adrenaline through our veins.

If someone is concealing a weapon and is worried about it, a police dog will immediately be alerted that something is off and will attempt to sniff it out. It is said that this is often how police dogs detect drug smugglerswho are nervous.

The way to train a dog to sniff out objects is fascinating!

Eventually, they become better at locating the target, and their training is complete when they can use the correct method of detecting firearms (explained below).

Training dogs to smell for gunpowder and firearms

I was also interested in knowing what signs to look for when a dog has located a target. There are two methods dogs are trained in to alert their handler: the passive and aggressive way.

The passive approach is used more often when the dog and handler are in a busy area, such as an airport. The aim is to alarm as few civilians as possible and get the situation resolved quickly.

In this case, when the dog detects the scent of a gun, they will sit or stare directly at the area where it is located. The gun might be on a person or hidden away beneath an object. The dog would remain silent until the handler finds the gun and gives them the signal to move again.

The aggressive approach to detecting guns is usually used when there are no civilians nearby. For example, the police may be informed that a suspect has hidden a weapon far away in a wooded area.

In this case, the dog would need to be very direct in locating the gun. This is when the dog would bark or start digging when they arrive at the spot of the hidden weapon. Under no circumstances are dogs trained to harm individuals who are carrying guns.

In general, there are a few signs that you might be able to pick up on when a dog detects a gun:

Where gun detecting dogs are used

In the past, dogs were primarily used for sniffing out drugs that were being transported illegally across borders. Canines are being used to detect guns more often in current times, as police are finding that they are a great resource in stopping or solving crime.

A primary method that a dog trained to smell for firearms would be if an armed criminal had just been arrested, and the gun was not found on their person.

The dog would be brought into the general area where the gun was expected to be found and would hopefully find the object before the evidence got contaminated.

As mentioned above, canines are also used to detect illegal weapons in airports. They will walk around, hunting for the smell of gunpowder on either a person or in a bag.

Of course, the dog will also track the smell of someone who is legally traveling with a gun as well.

In this case, you would need to declare the weapon to the airline immediately, and it would need to be unloaded while being transported. The bag it is in must remain locked, sealed, and inaccessible to anyone during the flight.

If you get stopped by a sniffer dog, you will likely need to speak with the officer and show them your official paperwork.

A new idea that police have been trying is to bring dogs into schools to check for concealed firearms. Some schools have implemented this service in addition to having metal detectors to keep their students safe.

This is in response to the increased number of school shootings that have happened over the past few years, particularly in the United States.

Having dogs that can smell guns in the school will hopefully help to cut down on the number of unnecessary tragedies.

Dogs have been trained to smell for illegal substances for years and have an amazing reputation for doing so.

Having said that, it costs money to train a dog to smell for something, and most police dogs are only trained to smell for certain narcotics.

Based on that, you would have to assume that most police dogs in service won’t have been trained to detect and sense firearms. Perhaps ones at venues and airports, but not your average police dog – at least I don’t believe so.

You might also enjoy these other reads about what dogs can and can’t do.