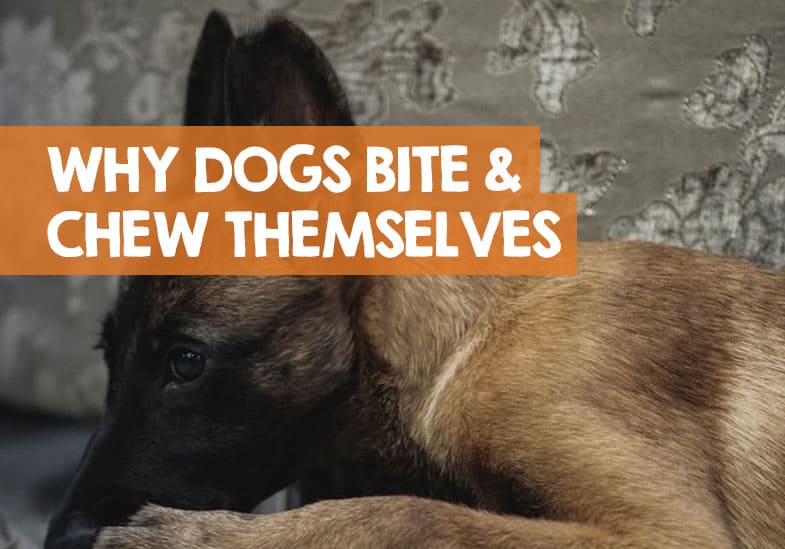 My dog sits with me all day as I work which gives me the perfect opportunity to observe his habits and behaviors. One such habit developed this week; he started chewing on his own leg and biting himself. It was a behavior I’d not seen before, so why is my does my dog bite his own leg?

Why is my dog biting itself? Dogs bite themselves most of the time when they cannot reach an irritating spot with their claws. Some scratching, biting, and chewing of their own leg is perfectly normal.

Admittedly, it looks dramatic when a dog bites itself but, unless this is new and persistent behaviour, there should not be much cause for concern.

However, it could mean something else when your dog starts chewing their own leg, biting their back end, or similar. Read on to see how to distinguish certain self-biting behavior.

What does it mean when a dog bites itself?

Where your dog is biting will provide clues to the underlying reason for the behaviour. Is it a generalised problem or is the dog biting a specific spot?

Itchy skin is the most frequent cause of incessant biting or scratching. Dryness, mites, allergies or advanced age could be responsible for your dog’s discomfort.

Dogs also bite themselves as a self-soothing mechanism. This could indicate that they are in pain, bored, anxious or in mental decline.

Your dog could be experiencing itchiness all over its body or at hot spots that have been created by infection or the biting itself. Where the dog is biting can tell you a great deal about the cause of the problem.

Climactic change such as a move to a drier season will have a desiccating effect on your dog’s skin. The itchiness would not be confined to one spot but be widespread.

Dry skin is best treated internally by regular doses of coconut oil in the dog’s food. It is possible to offer coconut oil as a stand-alone treat but it tends to melt quickly and become messy.

Add omega-3 fatty acids to your dog’s diet, in the form of fish oils from sardines or anchovies. These have the added benefit of helping to strengthen joints and easing orthopedic pain.

Allergic reactions to its diet, the shampoo you use, or environmental factors such as pollen or insecticides would also cause your dog to have a generalised itch.

Try to ascertain the underlying cause of the allergy and remove it or keep the dog away from it. Food allergies tend to be caused by too much starch in the diet. Try switching to a high protein diet, and include probiotics, such as yoghurt.

A spray of diluted apple cider vinegar will change the pH balance on the skin and give temporary relief from the itch, until the new diet solves the problem.

Affected areas that have become inflamed can be eased with a paste of ground oats and water, or by soaking the area in a strong solution of chamomile or other herbal teas.

On every dog, there is a measure of parasitic activity because it sheds hair and dead skin continuously. If parasites such as mites, fungi and bacterial infection are allowed to get out of control, they will cause itchiness and an overall loss in the dog’s condition.

Wash the dog regularly but not too frequently with a mild shampoo, in order to remove the dead skin. Brushing helps to remove excess hair, in short- and long-haired dogs, which harbours parasites.

If the dog scratches or bites incessantly in one particular area, it may become inflamed and provide further opportunities for infection. This becomes a vicious cycle as these parasites, e.g. mange, usually take hold when the dog’s immune system is already compromised.

Be on the lookout for inflammation and hotspots. Treat the affected area with a soothing anti-fungal or anti-bacterial balm. In addition, boost the dog’s immune system with a healthy diet, including supplementary vitamins and minerals.

Insect bites, from fleas and ticks, cause painful spots and generalised itchiness. There are effective products available that can be applied externally or in tablet form. They break the reproduction cycle of fleas and deter ticks.

Some people claim that garlic is harmful for dogs but I have used it in my dogs’ diets for several years, as an overall conditioner and insect deterrent, to great effect.

Natural insect repellents such as fresh lavender, rosemary and mint leaves will keep your dog’s bedding smelling sweet and free from pests.

There are numerous ways that your dog can ingest worm eggs or larvae which will then mature in the dog’s gut. Regular deworming is essential for both humans and their pets because some of these parasites are not species specific.

The type of worm infestation needs to be identified because treatments vary, and your dog may need additional care. Roundworm and tapeworm are the most common culprits, and remedies for these can be purchased over the counter.

Your vet should also be asked to check for heartworm, whipworm and hookworm if your dog is losing condition.

The smell is prohibitive so if you don’t feel up to the task, ask your dog’s groomer or the local vet to help.

Dog bites itself as a self-soothing mechanism

The types of typical pain that make dogs bite themselves can include the following.

If your dog is in pain it may resort to repeated licking or biting in order to get relief. The area that is targeted is often not the area that is painful. The underlying cause is usually a long term chronic condition in the bones or joints, such as arthritis or hip dysplasia.

There are a range of joint support and pain relief supplements obtainable from your vet or animal clinic. A diet that includes omega-3 fatty acids in fish oil would help to build the dog’s cartilage and joints.

Foods that cause inflammation should be removed from the dog’s diet. These include potatoes, tomatoes, and eggplant. Grains that contain gluten and other fillers in commercial dog food can exacerbate pain. Look for grain-free dog foods and those that list sweet potato as the main starch component.

Add anti-inflammatory foods to the diet. These include carrots, celery, spinach, kale and sweet potatoes. Lentils and sweet potatoes are healthy and filling options. My dogs enjoying chewing on cucumbers and raw carrots. Add turmeric and ginger in the cooking process.

Some problems that cause a dog to self-soothe are not physical. Your dog may have nothing better to do or it might be in a constant state of distress or despair. Also, as dogs age, they develop repetitive patterns of behaviour such as licking or biting.

Dogs are sociable creatures and need to be in a pack, even a small one which could be just you and the dog. They need companionship and reassurance that you are not going to abandon them forever.

Spend quality time with your dog by going for walks and playing games indoor that exercise its body and stimulate its brain.

When you need to be away for any length of time, develop a routine when you leave and on your return that lowers your dog’s separation anxiety.

Leave a toy that dispenses treats to help while away the hours. If your budget will stretch to it, there are internet based devices that allow you to interact visually and audibly with your dog, throughout the day.

In old age, dogs develop habits that bypass the cognitive process. Help to circumvent these by petting the dog or otherwise distracting it.

How to stop a dog biting itself persistently

When your dog is biting itself out of habit, physically stop it with a command or action. Think of it as someone who habitually bites their nails. They are usually not aware of what they are doing. When their attention is drawn to their behaviour, the motivation for biting is temporarily removed.

You can prevent the dog from being able to reach hotspots by placing the plastic ‘cone of shame’ around its neck. Also known as an Elizabethan collar, try it for a few days to see if the habit then stops. If do this, try not to leave them alone for long periods of time – here’s why.

This, however, causes the dog the added inconvenience of bumping into things with the cone. Depending on the height of the dog, this could mean your shins or calves are obstacles, which can be exceedingly painful.

It turns out my dog had a scratch on his leg, which is why he was chewing it. I think the scratch had become itchy, and it was the best way he could relieve it.

So, whilst most of the time, when a dog bites itself, it should be nothing to worry about, always take a closer look to see if there’s anything unusual in the spot.