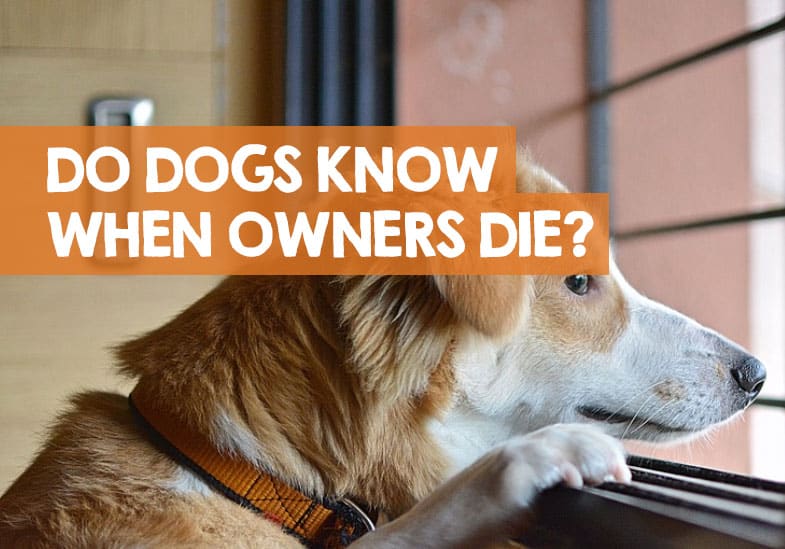 Dogs are known as man’s best friend for good reason. They offer companionship and loyalty, and both dog and owner form emotional attachments to each other. That means when a dog dies, it can have a huge impact. You only have to see the grief etched into an owner’s face when their dog passes.

But what about the other way around; do dogs know when their owner dies?

What do I mean by that exactly?

Well, I say there’s a lot of anecdotal evidence to suggest that dogs grieve when their owner dies, and there is. Loads of it, which I will highlight in this article.

It’s all about assumptions, as the examples I am going to show you are typical of humans projecting their emotions onto dogs.

But… I still think it’s all very valid. There is a lot research we can point to which shows the types of emotions dogs do have (such as picking on their owners crying), so it’s not a leap to suggest that dogs understand death.

Do dogs grieve when their owners die?

“Dogs and children seem to share what is known as the secure base effect. This effect is seen in parent-child bonding as well as the bond between humans and dogs. This refers to the idea that when human infants interact with the environment, they use their caregivers as a secure base.” (view source)

If this bond is as strong as science suggests and dogs do consider us as their parents, then it stands to reason that dogs get sad when owner dies. You will have undoubtedly heard about dogs where the owner has died, and the dog appears to be depressed and slip into what appears to be period of grieving and mourning.

Studies also suggest that dogs miss their owners and get sad when they’re away for long periods of time. I’ve covered this in more detail in my guide to dogs staying in kennels appearing to miss their owners.

When you put all these findings together and combine them with anecdotal evidence and stories you read online, you have to draw the conclusion that dogs grieve when their owners die.

And we make this conclusion based on my statement earlier about projecting human emotions onto dogs. We do that by defining grief in a dog as distress, anxiety, depression. Then physical signs such as panting, barking at night suddenly, whining, pacing, loss of appetite, weight loss, and listlessness.

These are all emotions that humans are known to show when they are grieving death of a loved one.

Do dogs understand death then?

That brings us around to the original question posed of do dogs know if their owner dies. In other words, do dogs understand death?

Let’s start with what the experts say.

In the 2013 Barbara J. King book How Animals Grieve (view on Amazon), she says:

“We can’t understand how an animal understands or thinks about death. We can only evaluate what we can see, and when someone in a dog’s life dies, dogs will react with behavioral changes.”

In other words, the dog will act sad when their owner dies. It’s this that could make most people arrive at the conclusion that dogs know their owner is dead, or at least missing and not coming back.

The Scientific American published an article in 2015 titled “humans are not the only creatures who mourn”. The text concludes that:

“When one animal dies, the survivor alters his or her normal behavioral routine—perhaps reducing the amount of time devoted to eating or sleeping, adopting a body posture or facial expression indicative of depression or agitation, or generally failing to thrive.”

As you can see, there currently is no science despite experts having their say

All we can do is assume dogs know when their owners die. And we do that based on the apparent grief we see them display with their behavioral changes.

One example of a dog appearing to understand death appeared on the Psychology Today website. The author, Steven Kotler, relayed a story where one of his rescue dogs died, and how another rescue dog reacted.

The dog that died was placed on a blanket, and the surviving dog kept pulling a blanket over the dead dog’s head. It looked to Kotler and his wife almost like burial type behavior. The actions were repeated, leading him to think that dogs do understand death.

Handy Hint: There’s another blog on Doggysaurus about whether you should let dogs see dead dogs.

Anecdotal evidence of dogs grieving when an owner dies

And then we have anecdotal evidence and stories that we hear about dogs appearing to react to the death of their owners or dog friends with grief.

As I’ve already mentioned, it’s unscientific to project our emotions onto animals, but If we observe dogs anecdotally, then they do appear to grieve.

For example, the Huffington Post ran a story in 2014 about the funeral of a police dog handler in Canada. During the ceremony the police dog whined beside the casket and jumped up to sniff at it.

It appeared to everyone at the funeral that the dog was grieving his owner.

On a personal level I know a dog owner who had two dogs, one of which died. The surviving dog went into a deep depression for months, and she was unable to get the dog out of the grief.

The grieving dog only got better once the owner bought a new dog into the household to be a companion to her surviving one.

How long do dogs grieve the loss of their owner?

If we assume that dogs do grieve when their owner dies, how long can you expect them to grieve the loss for?

There was a 2016 study that goes someway to answering this question, but perhaps not satisfactorily. The researchers found that dogs will grieve for other dogs, with the length of time varying from animal to animal.

After recording various dog’s behavior, the researchers concluded that dogs can grieve up to 6 months after the death of a dog friend:

It doesn’t take a wild leap of imagination given how close dogs are to humans to extend this conclusion to how long dogs might grieve after the death of their owner.

Handy Hint: 10 gift ideas to help comfort a friend when their dog dies.

How to help a grieving dog when owner dies?

If you are responsible for a grieving dog who recently has their owner die, there are some things you can do to help them. Ultimately the dog will be showing extreme signs of separation anxiety which can have a very detrimental effect on a dog’s mental health.

The best thing you can do is offer understanding whilst being sensitive to changes in the dog’s behavior.

This can include things such as:

Handy Hint: Often the grieving dog will be worst at night. You can find some tips on how to calm a dog after bedtime in this guide.

Whilst there is no conclusive proof that dogs know their owners have died, there is enough research into their behaviors and anecdotal evidence to suggest dogs understand death.

I love finding out about the different ways in which dogs behave and why. Here are some other articles I’ve published you might find interesting.