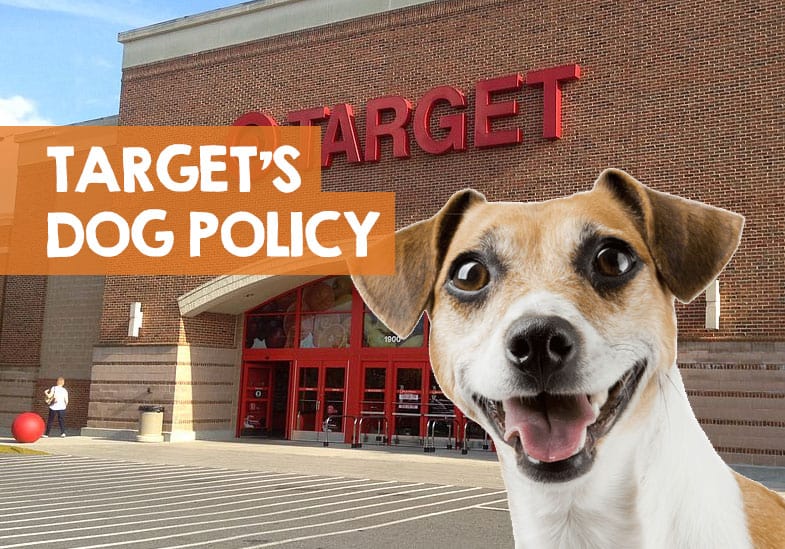 With this being such a popular store with so many people, countless dog-owners might be wondering whether they’d be allowed to bring a dog into Target. It might be that you feel guilty about leaving your dog alone whilst running errands or find it difficult to leave them at home for other reasons.

Here’s the quick answer on what Target’s dog policy is, followed by some details on what could be some possible exceptions to their pet policy.

Are dogs allowed in Target? Dogs are not allowed in Target. The only exception to this rule is with official service dogs (not therapy dogs). Other than that, Target is not dog friendly, and has a very strict dog policy.

But there are times where there have been exceptions to this rule. If you want to know if you can bring a dog into Target, and what the law says, keep reading.

As mentioned before, the official line on the Target pet policy is that the only dogs allowed in are service dogs. This is the case for all Targets across the country. That does not include therapy or emotional support dogs.

Often people get the two confused, but they are different according the American with Disabilities Act:

“Emotional support animals, comfort animals, and therapy dogs are not service animals under Title II and Title III of the ADA. Also, a doctor’s letter does not turn an animal into a service animal.” (view source)

The Target dog policy explicitly calls out service dogs as being allowed in, but that does not extend to other dogs. Here are the differences in more detail.

What is a service dog?

Service dogs are specially trained dogs that provide a specific purpose for people with a life-limiting condition.

Under law, these dogs are able to accompany their owners everywhere, even in stores like Target. They can usually be identified by a high-vis vest or harness and shouldn’t be interacted with because this can affect their ability to do their job and help their owner.

What is a therapy or emotional support dog?

Therapy dogs, or emotional support dogs, are a rising trend where pets are used to help relieve their owner of various symptoms related to mental health issues, such as anxiety, depression or PTSD.

So that should make it quite clear.

Is Target dog friendly where you live?

However, you’ve probably seen people with large and small dogs in Target, possibly even dogs being carried… where they are obviously not service dogs.

Well, I reached out to some Target employees privately on social media to get the low-down. Here’s a selection of their comments back to me on whether Target is dog friendly where they work.

“I worked in in my local Target one fall and just assumed that we allowed dogs in as long as they were well-behaved. My manager never told me any different, and we would never ask a dog owner to leave unless their dog was doing something bad.”

“Target is dog friendly depending on what the management team decide for the particular store location. The one I work in does not enforce the service dog rules and in fact I was explicitly told that our Target lets little dogs in and not to challenge customers at the entrance.”

“I heard a rumor that team leaders say it’s way too much hassle to ask everyone with a dog if it’s got service dog documentation. I don’t get paid enough anyway to get into an argument with people so just wave them on through.”

“Colleagues of mine actually carry little bags of doggie treats. It’s not always that great though, last summer a dog messed in an aisle and it wasn’t reported and cleaned up. For 30 minutes customers were nearly stepping through it!”

Can I carry my dog Target?

You might think that as long as your dog isn’t on the floor, it’s okay. You might well have seen people carrying dogs in Target, or even wheeling them around.

But carrying dogs in Target doesn’t get you around the nationwide pet policy, and it’s even applied to some service dogs!

As you would imagine, most service dogs need to be able to walk in order to carry out their duty for their owner. In this case, it is permissible for your service dog to be walked through the store.

This is to help the store maintain good hygiene, I get that.

In the case of non-service dogs, carrying them in the store as opposed to walking them through the store won’t make a difference as to whether they’re allowed in store or not.

Unfortunately, the Target dog policy is against pets in store whether they’re carried or not.

Why are dogs not allowed in Target?

Because Target sells a range of fresh food and produce, they have to adhere to a very strict set of health and safety guidelines in order to stock these products in their store and to reduce the chance of these products getting contaminated and in turn making their customers sick.

This is why dogs are not allowed in Target stores. If they come into contact with any of this produce – whether it be through sniffing, licking or playing with it – they could end up contaminating it.

As we know, dogs spend a lot of time outside, meaning that they pick up a lot of bacteria in their mouth, paws or fur that is dangerous to humans.

What does the law say?

When it comes to grocery stores like Target, the Food and Drug Administration’s Food Guide is unequivocally clear: live animals (dogs included) are not permitted to be in any kind of food establishment, which not only includes grocery stores, but also encompasses restaurants and coffee shops.

This is because the law has a responsibility to protect the food supply from contamination. Unfortunately, no matter how many baths you may give your dog, they are unsanitary to an extent and should not be allowed near food preparation areas.

This is because, as previously mentioned, dog feces, urine and drool as well as substances caught in their fur and paws can all contaminate food as well as making customers sick if they come into contact with shelves and counters that customers will later touch.

Of course, even with this guide, service dogs are subject to exemptions, but they are the only kinds of dogs that will ever be permitted in a Target store (officially).

It is also worth noting that the guidance around dogs in food establishments is something that is applicable across states.

How dog friendly are other stores?

Here, we will list some well-known stores that have both positive and negative stances on dogs coming in to help you plan your trip in advance.

Most stores should have information about whether or not they allow dogs on their website, so if in doubt, it is important to check information online. If they don’t have that information, why not give them a call?

Whilst some owners have reported that specific branches of Target can sometimes be a little lenient on their ‘no dog’ policy, it is important to remember that you won’t know until you get there.

If you are not absolutely certain that your dog will be allowed in the store, it is best to keep them at home. Do not keep your dog in a car, even with the windows down!

I regularly answer the pressing questions that dog owners have. Here are some of my more recent guides.