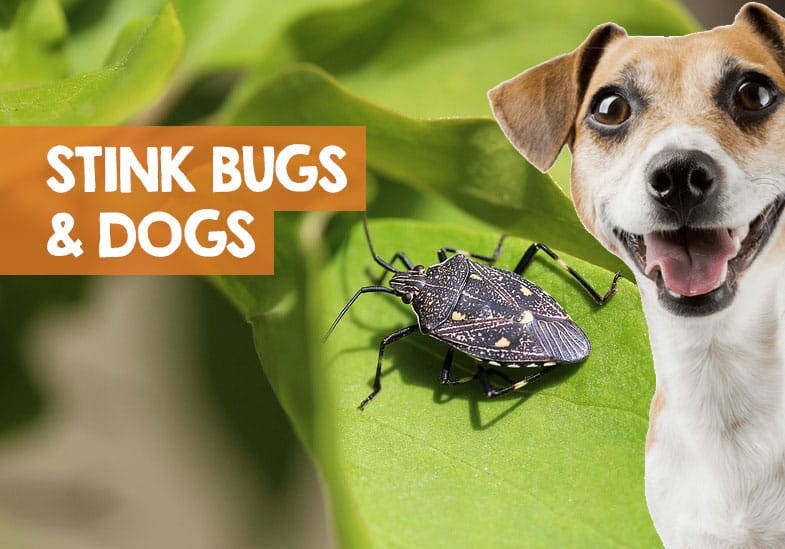 One of the funniest things about my dog is his urge to chase any insect that he sees. Whether it’s a wasp, spider, or bug, it’s fair game… particularly if the bug is in his territory. Which brings me neatly on to stink bugs and dogs.

Late summer to early autumn means turning leaves, a crisp breeze in the air, and creepy crawlies invading your home, including stink bugs. In fact, we recently had an infestation of them. My dog ate stink bugs; I could not help but worry about them being toxic and poisonous.

Here’s what I researched and found though. I hope it helps you too.

That’s the short answer but is a little bit more to it which I think you should read about. Just to make sure your dog’s health is paramount here.

Read on for everything you need to know about stink bugs and dogs, what to do if your dogs eat them, and how to keep them away from your home.

What happens if a dog eats a stink bug?

If you have them in your home, it won’t be long until your dog finds them and possibly even eats them… in volume!

They do have an odor to help keep predators away, as well as to attract fellow stink bugs if they find the ideal environment to live in. But if your dog is anything like mine, he doesn’t really care about nasty smells – the worse, the better it seems (like fox poo).

The thing with stink bugs is, if there’s one, you will have more… increasing the chances of your dog finding them and trying to catch and eat them.

As you know, dogs are endlessly curious creatures, and they usually use their noses and mouths to investigate objects they aren’t familiar with. Dogs will sniff and swallow all kinds of things that aren’t food, and this includes insects and bugs that find their way to our homes.

Stink bugs are a common infestation when the weather starts to turn, and some dogs love giving chase and eating them. Fortunately, as stink bugs are not poisonous you should not worry too much your dog’s health.

Plus, even if not eaten, it’s not like the stink bug will hurt your dog or puppy. Stink bugs don’t bite, or suck blood, or cause any internal issues as far as I can research.

They do, however, release very nasty smelling smells when in distress and when crushed. These secretions may be painful if they get into your dog’s eyes.

Stink bugs may also irritate your dog’s mouth if eaten. Rather than being poisonous or toxic, they can cause excessive drooling for a few minutes after they catch a stink bug.

Stink bugs might give your dog a bad belly

Eating a load of stink bugs could also give your dog a stomach upset. Ingestion may result in gastrointestinal upset, leading to vomiting. It doesn’t mean your dog has been poisoned.

These symptoms are self-limiting and will resolve on their own with no need for intervention.

Stink bugs invade houses by the thousands – it’s rare to find just one or two stink bugs on the wall. The biggest swarm ever recorded was 26,000 bugs spending the winter in one home (NewYorker.com).

In very extreme cases of stink bug infestation and your dog manages to swallow hundreds of them at once, this can form a mass in the stomach that cannot be broken down or passed any further through the digestive tract.

The most severe treatment would be to extract that mass via surgery.

But this would have to be so rare. I cannot find any references online where a dog has been so ill after eating stink bugs that they have been hospitalized.

So, what about stink bug spray?

It’s something I had to use extensively, and of course, was also concerned the toxic possibility too.

If you have a stink bug infestation, you may be tempted to use some kind of bug spray or insecticide to get rid of them.

Entomologists say that pesticides are not an effective way to get rid of household pests. In fact, spraying them in or outside your home may lead to more safety issues especially if you have pets.

Some insecticides are very toxic to dogs – immediate symptoms include nausea, vomiting, and chemical burns in the eyes and fur. Long-term exposure includes damage to their central nervous system.

So, the bottom line here is that, yes, stink bug spray could be poisonous and toxic to your dog so seek alternative methods.

How do I get rid of stink bugs without harming my dog then?

Stink bugs will not bite you or damage your home. They are not poisonous to your dog, either. But they are still a significant irritant when they invade, and it’s best to get rid of them immediately.

Seal all the gaps in your baseboards, trim, and around your utilities. Replace damaged screens. Look for egg masses hiding underneath the leaves in your garden or yard and destroy them.

The best way to get rid of stink bugs that are already in your home would be to use a vacuum cleaner. Make sure to clean the vacuum thoroughly after, or else risk the foul smell lingering well after.

How do I get rid of the stink bug smell on my dog?

Stink bugs will not poison your dogs if eaten, but they do give off an incredibly foul smell when crushed.

If your dog has swallowed a stink bug, the smell will likely be on their mouth and fur. Your first instinct may be to shampoo and wash your dog, but this may cause the smell to sink further into their coat.

The best solution is to don a pair of gloves and combine the following in a large, open container:

If you don’t have these ingredients, mixing 2 parts water with 1-part vinegar will work as well.

Work the solution into your dog’s fur. Be careful not to get it into their eyes. Leave it on for five minutes, then rinse thoroughly. Follow with your normal dog bathing routine.

You might also want try a special shampoo I’ve used before to get rid of fox poop smells. You can see which one I recommend on this link.

What bugs are poisonous to dogs?

Curious dogs will eagerly chomp on any bug they find with no concern for their own safety. As owners, it is up to us to keep our dogs away from dangerous insects. Some of these include:

We can’t always be sure that our dog won’t come into contact with poisonous insects. As always, the best recourse is to keep a close eye on their habits and behavior.

If your dog is exhibiting symptoms such as extended periods of vomiting or diarrhea, excessive drooling, swollen mouth, rashes, worms in their stool, or changes in appetite or behavior, it’s best to get them to their veterinarian as soon as possible.