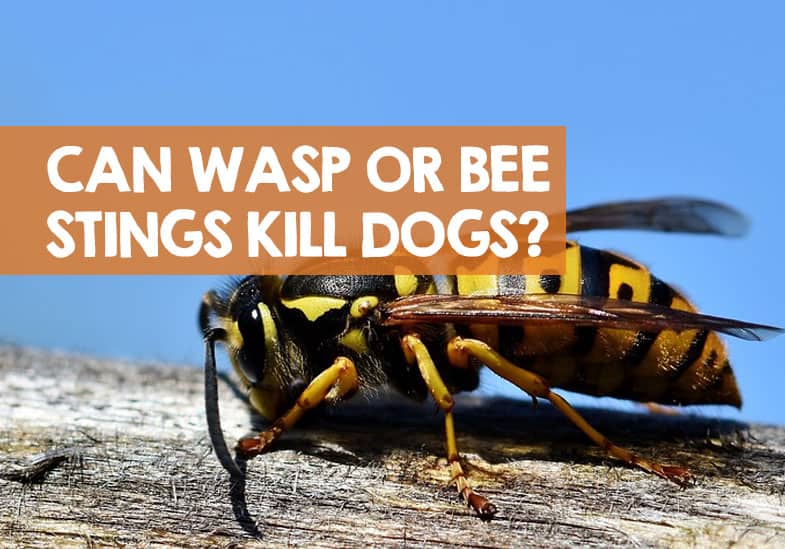 Dogs are naturally curious creatures who love exploring and sniffing everything in their surroundings. This can be a problem in the springtime when pollinators like bees and wasps are out in force.

If unlucky, they could be innocently sniffing around your blooming flower bed, only for your dog to be stung by a bee or wasp. It will hurt them, but will a bee sting kill a dog, particularly a small dog.

I’ve researched into it, including how long a bee sting will hurt your dog, and what the chances of a fatality are. Read more below.

Can a bee sting kill a dog?

The short answer: no, bee or wasp stings will not kill a dog. One bee sting cannot kill a dog. Most reactions to bee stings are mild, and while your dog might feel uncomfortable and the sting site might swell, all symptoms should die down within 24 to 48 hours.

However, wasp and bee stings can be painful and hurt your dog more if stung in a particularly sensitive area, such as the inside of his mouth. Some areas can actually present a risk and present a small chance of death.

For example, a wasp sting in the mouth can cause swelling which might block the dog’s airway. Make sure you monitor your dog closely for any signs of respiratory distress such as coughing and labored breathing.

Some dogs can also develop anaphylactic reactions to insect, wasp, and bee stings. Your dog might be specifically allergic to bee stings and may need immediate medical attention.

Multiple stings, or if your dog has been attacked by a swarm of bees and stung repeatedly could be a different story.

How many bee stings does it take to kill a dog?

While wasp and bee venom is generally harmless, mass-stinging events can kill a dog because the venom is injected in large, toxic amounts. Massive envenomation (multiple stings) can be deadly even in non-allergic animals.

How many bee stings will kill a dog? Based on what I have researched, it could take 20 stings from a bee or wasp to kill a dog. Proteins in bee venom can cause neurotoxins to paralyze a dog’s spinal cord, cause bleeding in internal organs, and destroy red blood cells and muscle cells.

If your dog disturbs a beehive and has been stung multiple times, he should immediately be taken to the vet. Bee venom can persist in a dog’s body for hours or days at a time.

Why are the symptoms of a bee sting on a dog?

Symptoms to monitor are bleeding, dilated pupils, seizures, facial paralysis, and difficulty walking. If all symptoms are treated effectively, dogs can still recover even from massive envenomation.

You might also see your dog walking in a funny manner, such as sideways depending on the site of the wasp or bee sting.

What happens when a dog gets stung by a wasp or bee?

Dog owners often do not witness the moment a bee stings their dog. Bee stings are most common when flowers are blooming in springtime, and you will have to watch out for some of the common signs of a bee sting.

If your dog is outside and you hear a sudden yelp, he may have just been stung. Your dog may excessively lick his paw if he’s been stung on his foot. You may notice some swelling or excessive pawing on his face.

What should you do if your dog gets stung by a bee?

Monitor your dog closely for thirty minutes. If there are no signs of a severe allergic reaction, there’s no need for medical attention. A simple sting can be mostly left alone, and the small wound will not bother your dog for very long.

If you see a stinger left behind, you can try to remove it with your fingernails or a stiff card in a gentle scraping motion. Gripping the stinger with forceps or tweezers may force more venom into the wound or even your hands, so it’s best to avoid using them. Don’t bandage the area or attempt to suck out the bee venom.

Some soap and water or a mixture of 1 teaspoon baking soda with 1 liter of water can help reduce the pain on the sting site.

A bit of ice wrapped in a towel can reduce swelling and ease discomfort. Ice can be applied every 4 hours for 10-15 minutes at a time. If swelling persists after several days, take your dog to the vet.

Further biting or pawing at the wound could cause infection, so you may choose to put your dog in a pet cone or Elizabethan collar for a few hours after a bee sting.

Over the counter medications such as Benadryl can help with itching and inflammation, but before putting any on your dog, consult with your veterinarian first. Some active ingredients in Benadryl products can be toxic for dogs.

How some dogs get allergic reactions from wasp stings

Just as some humans have extreme allergic reactions to bees, some dogs can, too. Unfortunately, there is no way to predict what type of reaction your dog will have when stung.

Some dogs that only had mild reactions to previous stings might have a severe reaction in the next. It’s all up to the owners to respond quickly and appropriately to the symptoms that occur.

These sudden, life-threatening reactions occur within minutes of a bee sting.

Some symptoms include vomiting, bloody diarrhea, pale gums, drooling, sudden aggression, difficulty breathing, staggering, and sudden collapse. If your dog has any of these symptoms, you have to take him to the vet immediately.

A dog experiencing anaphylactic shock should immediately be treated with epinephrine, oxygen, IV fluids, and close monitoring. With rapid treatment, most dogs will recover from an extreme allergic episode after a few days of confinement.

If your dog has experienced a true anaphylactic reaction, you can ask your vet for an EpiPen prescription. EpiPens contain a single dose of epinephrine that you can take with you on future outdoor walks or hikes, and you can use it for immediate relief if your dog experiences another severe reaction.

How long does it take for dogs to recover from a bee sting?

Dogs with mild bee stings will feel normal within a few hours. The sting site will stop swelling and disappear within 48 hours.

If your dog’s symptoms don’t improve within two or three days, take him to the vet with thorough descriptions of the event and how your dog has been behaving. Your vet may prescribe steroids or other medications to reduce the reaction.

If your dog has been prescribed Benadryl, he will likely be a bit dizzy and disoriented. It’s best to let him sleep off the side effects of the medication. Keep him in a quiet area, and keep him away from the stairs.

Dogs who receive Dexamethasone will be thirsty and will drink more water than usual. Make sure to top off his water bowl and take him outside for walks to relieve himself.

How do I keep my dog from getting stung by a wasp or bee?

The best cure for a bee sting is prevention. Of course, this is easier said than done. A curious dog’s first instinct is always to explore his environment.

If you’re out on a springtime walk, you can try avoiding flower patches and blooming bushes. A wide-open field might be a better choice than residential sidewalks studded with blooms.

Good leash control will keep your dog away from these areas with a simple command.

Some wasps build hives underground, so keep your dog away from sniffing around holes in the dirt. If you find a hive in your yard, fence the area off so your dog can’t come close. A local beekeeper can safely remove the hive for you.

Bee and wasp stings will hurt your dog. However, in most cases, a bee or wasp sting will not kill your dog.

There are other insects you should also be aware though. Here’s a list of things to look out for in your garden including which varieties can harm dogs.