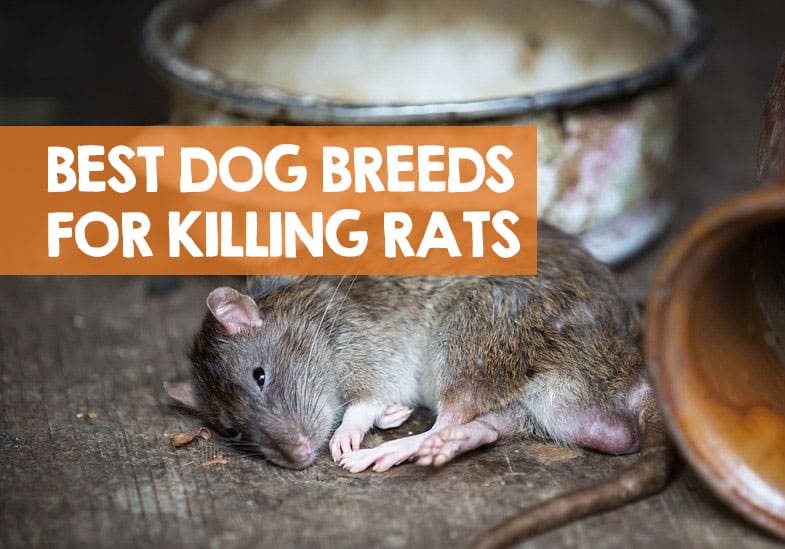 Contrary to what many people think, it’s not just cats that kill rats. Dogs can keep rats away too and will even chase and kill rodents. But what dog breeds kill rats best, and which have been bred that way?

Don’t fret, all you need to know is detailed below with the short answer first, followed by more detail on the best rat killing breeds of dog.

What dog breeds kill rats? The best dog breeds to kill rats include the terriers such as Yorkshire Terriers, Jack Russel Terriers, Lakeland Terriers, and of course, Rat Terriers. Other breeds such as German Pinschers and Dachshunds are also good at keeping rats away.

The kind of dog breeds that kill rats best

There is no shortage of dog breeds that are adept at catching rats. In the list below I’ve detailed the different breeds of rat catchers and what the differences are between them – you never know, you might find your rat catching dog on the list!

Many owners will be surprised to find out that their cute little Yorkies are capable of catching rats. However, they are, in fact, one of the best dog breeds to kill rats suited for this job.

For example, the Yorkshire Terriers’ small size gives it a distinct advantage over larger breeds, allowing it to pursue rats through tight spaces and corners, as well as under low buildings and sheds.

Yorkies are also very clever and energetic dogs and need a lot of exercise to keep them happy and content.

Not only do they make good ratters and mousers, but they also make great family members, being especially suited to families with young children.

The Jack Russel is a fantastic dog breed to kill rats and mice. They are happy and energetic dogs who love to work. They are regarded as some of the best ratter dog breeds in the world and are great at keeping their owner’s yards free from rodents.

Interestingly, they originate from a fox-hunting breed in England, and as such are adept at flushing out mice and rats from hidden areas.

Handy Hint: I’ve previously examined the evidence behind dogs being able to keep foxes away from your yard or garden. Here’s what I discovered.

The Jack Russel breed make great companions for children and are often very cheerful and loving dogs. They are extremely smart and can learn a variety of different tricks, often featuring in movies and tv shows because of these traits.

However, because they are so full of energy, they often need multiple long walks per day.

Originally bred for flushing out burrowing animals such as badgers, voles, and gophers, Dachshunds stand out as one of the best dog breeds for killing rats.

They do not belong to the terrier breed. Additionally, they are renowned for their great sense of smell, which hunters would sometimes use to aid them in hunting larger animals like boars.

Daschunds are very popular amongst families and have been ranked at the top of many popular dog lists since the 1950s. They are known to be full of personality and can at times be very stubborn.

Despite this, with regular exercise and long walks, they can be extremely loyal companions.

Originating from the Lake District, England, Lakeland Terriers make great for a great rat catching dog breed due to their abundant energy and small size. Much like Yorkshire Terriers, they are adept at finding rodents in hard to reach places and will make sure that they keep any rats from entering your home.

This breed is incredibly playful and is also known for their love of children, with whom they form strong bonds.

The only unfortunate trait of this breed is that they love to chase any animals that move, including cats or other small pets. To stop this from happening, it is vital to associate them with these types of pets at a young age, normally when they are a puppy.

Another non-terrier breed that loves to catch rats, the German Pinscher is a medium-sized dog famous for both its ability to kill rats and its prowess as a skilled guard dog. Dating back to the 18th century, this breed was commonly used to guard coaches to prevent robberies and other crimes.

Bred specifically for ratting, German Pinschers possess the ability to smell rats from large distances. In addition, due to their guard dog nature, they are very vocal and will alert you to any visitors that come knocking on your door.

Likewise, German Pinschers often make great companions and are very loyal and protective of their owners.

However, it is worth noting that they are not recommended for families with children under the age of 9, due to their strong and assertive nature.

Originating from America, Rat Terriers were named by President Theodore Roosevelt and are regarded as one of the best dog breeds for rat-catching and hunting in the world.

They are extremely fond of digging and are farmyard dogs at heart, often helping farmers to get rid of rodents on their properties and farmland.

Despite all these traits, Rat Terriers can be brought up in a house or apartment without any problems.

However, they will need regular walks and exercise to stay happy. Also, it is worth keeping in mind that if you have a yard or garden, they will likely dig holes in it from time to time – unfortunately, this just comes with owning a Rat Terrier.

Despite this, Rat Terriers make great family dogs and are very loving and gentle with children.

Why dogs are best for rat catching and killing (vs cats)

Dogs can be extremely good at rat catching like we already know cays are. But actually, they are often way more effective than their feline counterparts.

For example, the majority of cats will only catch mice when they feel like it – not when they are told too. Whereas dogs can be trained to carry out this task.

You see, unlike cats, certain breeds of dogs have been specifically bred to hunt down rodents. These types of dogs, known as Ratters, are small to medium size in stature and are normally short-haired with smooth coats.

Although using dogs specifically for catching rats is sometimes frowned upon nowadays, knowing which breeds are capable of this can be useful for keeping your home or family safe from rodent intruders.

This is especially helpful if you live in the country or on a farm.

The history of dogs bred as ratters

Over the course of many years, ratters were bred for their quick reflexes and tenacity in hunting down rats.

What’s more, this selective breeding installed into them a lack of fear uncommon to their size, as well as a healthy amount of courage and determination – all traits that were needed to successfully catch rodents.

In the mid, to late 1800s ratters were extremely important and were responsible for keeping the local rat population down in many areas. Without them, diseases such as the plague could have quickly become present in the local populace.

Additionally, they were regularly used by wealthy businessmen to keep merchandise in their factories safe, which were often spoiled by rats or other rodents – causing large losses in their revenue.

Interestingly, rat-catching dogs would also become a lucrative business for those that owned several ratters. The men who did this, somewhat uncreatively named “rat catchers”, would use their dogs to catch live rats, and would then sell them to those that were involved in rat baiting – a bloody and barbaric sport which was extremely popular in the 1800s.

This sport involved releasing a number of rats into a pit and then tasking a dog, often a terrier, with the job of killing the rats in the shortest time frame possible.

Those watching would place bets on how much time it would take the dog to carry out this task, sometimes earning a pretty penny.

Not only was this cruel for the rats, but often the dogs involved would end up injured as well.

Thankfully, in 1912 the sport was banned, and from there it became a distant memory and disappeared into obscurity.

Is it cruel to let your dog catch rats?

There are valid arguments for and against rat hunting when it comes to animal welfare. However, terrier-type dogs and other breeds specifically bred for rat catching are said to get a sort of instinctual satisfaction from hunting rats.

In a way, this is similar to how German Shepherds are often used as guard-dogs or watch-dogs, or even how spaniels are used as hunting dogs.

Likewise, it is important to note that rat-catching is supported by many large animal welfare organizations, those of which see it as a humane way of keeping rodent populations from getting out of control.

Additionally, allowing a dog to catch rodents can deter people from using cruel and inhumane methods to catch rats, such as glue traps.

That being said, rats are undeniably creatures that deserve to be treated with a level of respect because of their sentience and intelligence.

However, due to their prolific breeding nature and the risks they can often pose to human health and safety, their population ultimately needs to be kept in check when it begins to get out of control.

We’ve had rats on our property before, and despite out best efforts to humanely get rid of them, it just didn’t work. In the end we called a professional pest control expert as our French Bulldog was pretty useless at getting rid of them.

Here’s more content on Doggysaurus on a similar tip: