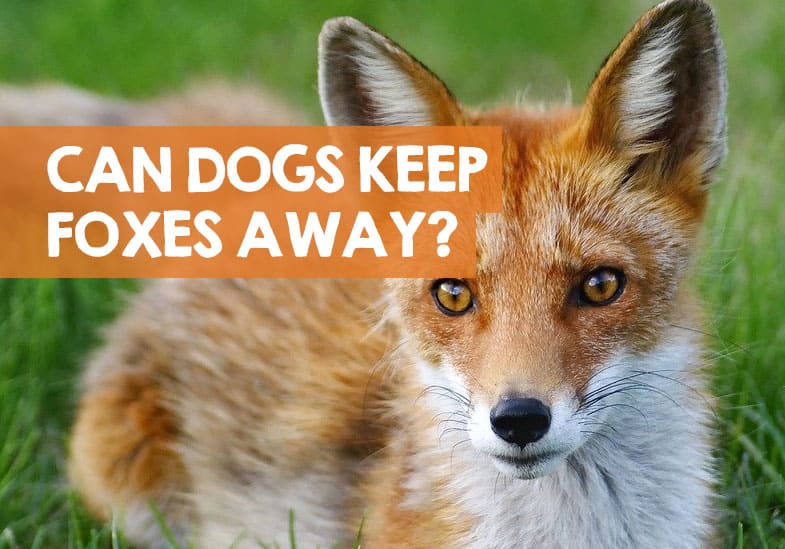 If you keep chickens and want to keep foxes away, then dogs could be something to consider as a deterrent. Perhaps foxes are messing your property up, and you just want to get rid of them. Whatever the situation, this guide has been written to explain whether dogs keep foxes away, and if dog urine, poop, and hair also acts as a deterrent.

Will dogs keep foxes away?

I’ve read lots of online forums about what people saying about keeping foxes away by using dogs. There’s a common theme that runs through all of them; not many people have succeeding in using a dog to deter a fox in their garden or yard.

A lot of comments mentioned how by just having a dog barking in your house it’s unlikely to deter a fox. Urban foxes are particularly bold these days and have no real fear regarding loud noises as they are used to living in close proximity to humans.

Other people also said they had lets dogs run loose in their gardens and yards for a lot of the day, and even these measures didn’t make a difference. The foxes would still come back once the dogs went indoors for the night.

Based on this experience, I would say that dogs don’t keep foxes away, and their scent or activity alone probably isn’t going to scare away foxes.

But what about other things like dog poop, dog urine, and dog hair? Will these keep foxes away?

To find out I spoke with neighbors of mine who all keep chickens in their garden and have had problems with foxes in the past. Over a period of 3 months we decided to test the various dog deterrents with the following results.

Will dog hair keep foxes away?

The test involved winding dog hair around the chickens fencing. We didn’t just use the hair of one dog though, but got hair from both male and female dogs, and also a variety dog breeds from friends.

Unfortunately, the dog hair did not keep the foxes away and proved to be no deterrent whatsoever.

Does dog urine keep foxes away?

Another tip you might find online is how dog urine deters foxes. This was a hard one to test as you can’t really get dog urine unless you are really quick!

We heard that male dog urine works best, from an un-neutered dog.

How we did it was by tethering my dog and my neighbour’s dog to the back fence, gave them a large bowl of water and left them for couple of hours in the shade. They will then inevitably urinate near the fox entrance.

As with the dog hair, dog urine also didn’t keep the foxes away as they came in under the fence the very same night where the urine was.

Handy Hint: Foxes have been known to attack small dogs, and here are some press reports of recent cases.

Will dog poop keep foxes away?

The last test was simple enough; we positioned dog poop around the perimeter of the chicken fencing over night to see if the foxes would be scared. As you might have already guessed, that night we saw foxes prowling the outside of the chicken coop, completely oblivious to the dog poop.

To conclude, dog poop does not keep foxes away and was no form of deterrent at all.

Handy Hint: Do you have a dog that loves to eat fox poo? If you, please try to stop it because it might make them ill as you can learn here.

What dogs keep foxes away then?

The only way in which dogs will keep a fox away will be if the dog is physically in the garden at the time the fox tries to enter. Most dogs will chase up to the fox, and the fox will quickly run off as they will be scared of the confrontation.

But of course, keeping your dog loose in your garden 24 hours a day is completely impractical for most people, so you need an alternative deterrent that works.

And you can see those below.

The best repellent isn’t actually a repellent at all, but simply means you secure your chicken coop better. If you still have problems, the following recommendation might help:

This small machine is simply to set-up and works by emitting flashing lights and sounds that we can’t hear but are irritable to foxes and other pests. You can buy this on Amazon.

There’s a solar panel on it which means you can leave it out to charge by itself. It has a range of 9 meters, and an angle sensor letting it have a wide coverage.

It doesn’t just deter foxes but is also said to work on other pests you want to get rid of such as rats, moles, squirrels, and coyotes.

Another reason that foxes will frequent your property is if they have a readily available food source. To prevent this, keep your dog’s food out of your garden or yard, as it will attract hungry foxes. Some people will even leave dog food out for foxes to eat. Don’t do this if you want them to leave your garden alone.

Unfortunately, dogs don’t have a great track record in keeping foxes away unless the see them in the moment and chase them off. The simple scent of a dog doesn’t seem to act as a deterrent so you will need to take different measure to rid your property of the fox problem.

I regularly blog about dogs and their relationships with other animals, here’s a selection of some of the most relevant to your search: