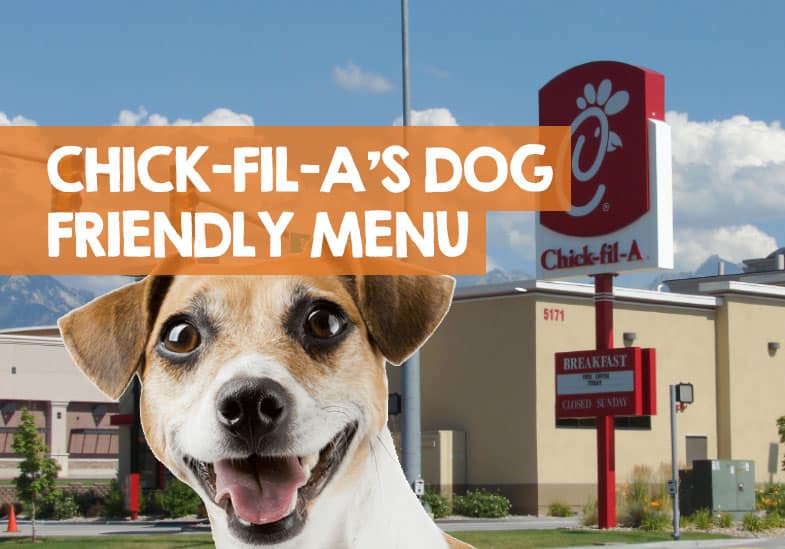 I know what it’s like. Sometimes you’re on the road with your dog and the only option you have is a fast-food joint. But which do you choose? Well, Chick-fil-A isn’t the worst option given they sell grilled chicken – not the worst option for a dog… the ice cream, nuggets and fries are a different matter though!

But what exactly should you consider with this outlet, and does Chick-fil-A have anything for dogs specifically? I decided to investigate whether you can still get Chick-fil-A dog treats from a secret dog menu, and if not, what instead you could give them if you really have no choice.

Firstly, the rumors over the Chick-fil-A secret dog menu.

You might have heard that Chick-fil-A does dog treats or there’s a secret dog-friendly menu. This isn’t strictly true, but I can see why it seems to be considered fact.

From what I can ascertain, certain outlets in the US have occasionally run promotions offering Chick-fil-A dog treats to drive through customers. Some of these promotions have been short-term, but there are still restaurants who continue to do this at their own discretion.

How do you know if your local Chick-fil-A does have a dog menu? Well, I guess you will just have to ask next time you go.

Which leads me on to the next section which explains what you might consider Chick-fil-A dog friendly food that’s on the main standard menu.

As a brief synopsis before I start. I don’t recommend you let your dog eat Chick-fil-A. It’s bad to give your dog any form of junk food. It’s unhealthy for them just as it is for you with no real nutritional value or benefits to gain.

But perhaps you have just taken pity on those soft eyes or your dog steals a chicken nugget. Is that so bad?

Well, nothing on the Chick-fil-A menu will likely be fatal to your dog. They will be unhealthy though, and some things may make them sick. For example, onions can cause upset stomach which can be found in the salads and deluxe burgers.

Here’s a more in-depth analysis of what dogs can eat from Chick-fil-A and what the calorific consequences or dietary issues might be.

What can dogs eat at Chick-fil-A?

To answer this question as fully as I can, I thought it best to list the core items of the Chick-fil-A menu and how suitable it may be for your dog to eat depending on their ingredients.

Below are some things that are more or less “safe” to eat and the varying qualities that make that the case. There are also things that should be avoided, and I will explain why.

I will point out the things that are deeply unsafe or toxic for your dog to eat so you are fully aware of that too.

Please remember, I am not a vet, so you should verify all information with your trusted professional veterinarian.

The first thing to mention is the recommended daily calorie intake for dogs. Pet Obesity Prevention suggests the following:

If you exceed the recommended nutritional requirements, your dog may suffer from obesity. Obesity leads to heart problems, mobility issues, and, generally, a shorter life. We don’t want that so don’t give your dog junk food often.

In simple terms, Chick-fil-A is not that dog friendly!

Can dogs eat a Chick-fil-A sandwich?

So, to all Chick-fil-A lovers, you know that chicken is the main feast here and there are two classic burgers: the chicken sandwich and the grilled chicken sandwich. Here’s a calorie breakdown, but before I do that…

Dogs can eat a Chick-fil-A sandwich but remove everything aside from the grilled chicken. That means your dog won’t get salts, sauces, heavy carbs, onions, and other things that could upset their stomach.

The classic Chick-fil-A chicken sandwich, which contains 400 calories. A simple, toasted, and buttered bun with a crispy chicken breast. If you have added no extra toppings to the sandwich, this is technically safe for your dog to eat.

The chicken is of course a favorite of your pup I’m sure. The bread is also safe to eat, though it is likely your dog isn’t very interested in it. The extra carbs are very harmful to your dog’s health in the long term but not toxic.

As for the pickles, they are safe to eat but are very high in sodium. High salt content leads to health issues down the line, as it does for us.

If you are a grilled chicken person, you are choosing a slightly healthier alternative for your dog too as it only contains 320 calories all in! Without that crispy, deep-fried, and heavily salted exterior, the chicken is slightly leaner and lower in sodium making it a more dog-friendly menu item from Chick-fil-A.

The tomatoes and lettuce are not dangerous at all for your dog, but again, they probably aren’t in it for the vegetables!

If you choose to slather on some of the honey roasted BBQ sauce, it does contain onions and garlic which can cause digestion issues for your dog and is best avoided.

Spicy food should be avoided when it comes to dogs. Please don’t let your dog eat the Chick-fil-A spicy chicken. It can cause a lot of discomfort and illness and is heavy on the calories with between 460 and 550 listed.

You know how some humans get digestive issues with spicy food? It is very much the same for dogs. It causes diarrhea, gas, bloating, tummy ache – all kinds of nasty things.

It won’t be fatal for your dog, but definitely one to avoid.

This is an interesting one! Many Americans opt for the Chick-fil-A wrap because it is healthier for our bodies than the deep-fried deliciousness that is the chicken sandwich.

But could it be that this is somehow worse for your dog’s health, even looking past the heavy 350 calories it includes?

For a start, many dogs are lactose intolerant despite their best efforts not to be. They may love cheese, but cheese doesn’t love them. The avocado lime dressing is a definite no-go here. Avocado can be very toxic to dogs, causing many health issues.

The wrap may feel good to you but best avoided – dogs should not be eating this Chick-fil-A wrap at any point, no matter how hungry they are.

Well, you might be surprised about your dog being able to eat Chick-fil-A grilled nuggets. Here’s the lowdown.

At 250 calories, Chick-fil-A nuggets arenot the worst thing in the world for dogs. No toxins or poisons or fear of stomach upset. The issue here though is the sodium and fat content.

The regular chicken nuggets are breaded and deep fried so they are infused with potentially artery clogging grease that is bad for your pet long term.

The amount of salt needed to make nuggets as moreish and tasty as they are would shock you if I poured it into the palm of your hand. it’s definitely not the worst thing to give your dog but it’s not the best either…

Handy Hint: I’ve previously written about the dietary quality of other chicken nuggets at restaurants, plus one you cook at home from frozen.

With just 130 calories and way they are cooked,Chick-fil-A grilled nuggets areprobably the very best thing you could give your dog on the Chick-fil-A menu. The calorie count is lower. There is also less fat, and less salt used here.

Don’t get me wrong, the salt count is still high but out of the entire Chick-fil-A menu, it is the best option.

The dipping sauces and dressings that come with Chick-fil-A orders can also be a concern to dogs’ delicate stomachs. There are so many, so I won’t go through all of them.

The better thing to do is to list the things your dog should avoid. The dipping sauce is to be avoided if they contain any of the following ingredients:

Consult your vet for a more comprehensive list of foods they should avoid.

Finally, let’s talk about whether it’s safe for dogs to eat Chick-fil-A fries! Chick-fil-A have their famous waffle fries that are a huge draw for us mere mortals, even with the 420 calories per serving.

My dog absolutely loves the smell of Chick-fil-A fries. If I order takeaway food, it’s always the fries that get the most adoring looks.

The first thing to say here is the huge calorie count. How could it be that the calories of a portion of medium fries is higher than the grilled chicken sandwich?

Well, mostly it’s because it is potato and carbohydrates carry a lot of calories in them. But in general, it is worth noting that one portion of Chick-fil-A fries is double some dogs’ daily recommended intake, which is a problem.

The big problem with fries, however, is… can you guess?

We all know how much they salt fries. If you have ever seen the saltshaker at fast food places being mixed periodically with the fries, it would make your eyes water. That salt is so unhealthy for your dog.

Overall, Chick-fil-A fries are incredibly tasty and tempting, but not great for your dog’s health.

You grab the familiar crinkled white paper bag from the server at the drive-thru window. You drive home speedily, smelling wafts of the food, and getting hungrier by the second. You get home. You tear open the bag. You inhale deeply as you squeeze the chicken sandwich in your hands. You are just about to take a bite and then…

There they are. Your dog, drooling and pining for what you are so intensely enjoying from the Chick-fil-A menu.

You feel that pang of guilt from those soft puppy eyes.

However, given what we now know, you might want to reconsider letting your pup have Chick-fil-A dog treats.

I have written extensively about similar outlets and how they can be bad for your dog’s health, including: