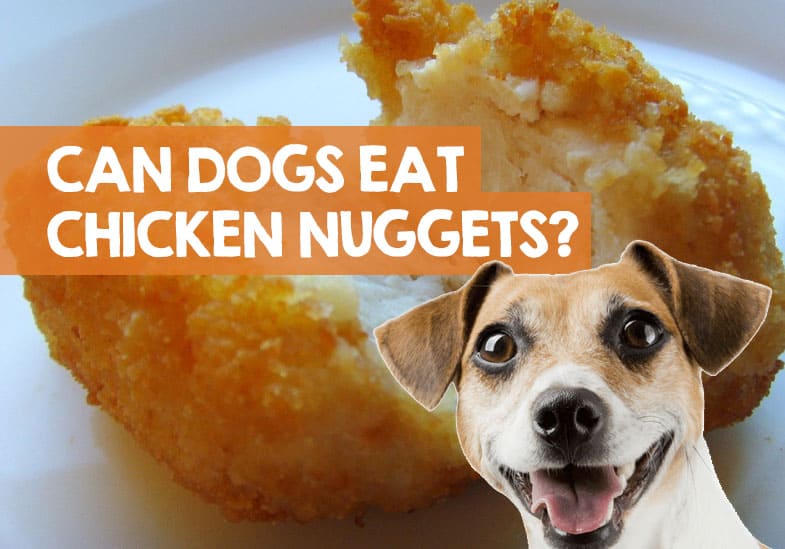 Before I get too deep into this guide, I wanted to make something clear; I do not recommend that you let your dog eat chicken nuggets, even the vegan or Quorn ones, and I will explain later. But in simple terms, you don’t need to know much about nutrition to realize that there’s not a lot of goodness in fast food, especially chicken that’s been fried.

Having said that, there are times when you might not have any choice but to give your dog a chicken nugget to eat (perhaps you are travelling and have nothing else). Or it might be that you dog eats chicken nuggets accidentally… or even an occasional treat.

Regardless, in this guide I will explain why some chicken nuggets are better for dogs than others, how you can make them less calorific, and what the major chains like McDonald’s, Wendy’s, and Chick-fil-A put in their nuggets that could be bad for dogs.

Whilst dogs can eat chicken nuggets, most of the meat used by fast food outlets will be processed, offering less nutritional value than standard chicken. Chicken nuggets are also fried in a batter, so this should be removed before feeding nuggets to your dog.

The bottom line is this; dogs can eat chicken nuggets, but it should only be a last resort in feeding them. However, as with anything like this, there are some exceptions to the rule which I will now cover in more depth.

I am going to start by looking at the most popular chicken nuggets from McDonald’s, Wendy’s, Chick-a-Fil, then the vegan and Quorn varieties that you can now buy.

On Amazon you can buy a range of products that aren’t too different to chicken nuggets, but are certainly safer for dogs to eat. My dog’s favorites are these chicken snacks for dogs.

Your dog will love eating McDonald’s chicken nuggets, but the meat is heavily processed. It’s not a great addition to any dog’s diet, particularly with the batter.

Whilst in theory yes, dogs can eat chicken nuggets from McDonald’s, just stop a moment and think about what they are coated and then cooked in.

Their nuggets are coated in breadcrumbs then fried and battered, being cooked in a fryer. When you put it like that, it’s not really something your dog should eat if you value their health.

In medical terms, batter coating on a McDonald’s nugget serves little purpose other than blocking your dog’s arteries, raising their cholesterol and being difficult for them to chew, swallow and digest.

If you really do want to let your dog eat McDonald’s nuggets, please peel the batter off first, so it’s just the chicken meat remaining.

What I’ve done below is calculate how many calories are McDonald’s nuggets and then calculated the nutritional value based on two average dog sizes. This should help you make a more informed decision on whether to let your dog eat chicken nuggets from McDonald’s.

If you then take the weight of two popular dog breeds, you can see how McDonald’s chicken nuggets might impact their daily calorie limits.

Based on those numbers, here’s how many calories a chicken nugget serving from McDonald’s would impact on both dogs.

Are McDonald’s chicken nuggets bad for dogs then? Well, yes and no. If you do let your dog eat them, I recommend peeling the batter off first, then you have something that is much healthier for your dog.

Handy Hint: Here are some suggestions to what your dog can eat from the McDonald’s menu when the need arises.

What happens if my dog eats McDonald’s nuggets?

If your dog does eat a lot McDonald’s chicken nuggets, then the reaction will be down to how many they ate, what was on them (e.g. salt or ketchup), and your individual dog.

If the documentary Supersize Me taught us anything, it is that McDonald’s has minimal nutritional value, cannot be used as a substitute for every meal and can have catastrophic health consequences when eaten in large quantities.

There’s a reason why dogs and humans need different food – dog food contains all the necessary nutrients that are essential for dogs to grow, develop and live a healthy and fulfilling lifestyle.

Indeed, as well as McDonald’s nuggets lacking in essential dog-tailored nutrients, they can also be rich in fat, sugar, salt, carbohydrates, artificial preservatives, seasonings and condiments.

If your dog suffers from diabetes, foods rich in sugar or carbs could end up worsening their condition. This means it is especially important to remove any batter before giving them chicken nuggets from McDonald’s.

You should also tread carefully if your dog has a heart condition, because a lot of the food in McDonald’s is incredibly high in salt.

But, in most cases, a few McDonald’s chicken nuggets are not going to poison your dog. Technically, it’s not going to be a massive problem in small moderation, but with the batter being fried and potentially salty, I would avoid nuggets in your dog’s diet completely.

Just think of how they are cooked… in oil. The type of oil that chicken nuggets are cooked in are not good for dogs to eat as they include a lot of trans and saturated fats; these are the bad kind of fats.

I also ran the same calculation on nuggets from Wendy’s to see what the calories consequences would be for two common dog types.

Here’s what I found out:

As you can see, if you have small to medium sized dog and they eat a portion of Wendy’s chicken nuggets, it’s not good and is way over their snack allowance.

You also need to consider what’s in Wendy’s chicken nuggets; here’s a selection of what I believe to be the worst ingredients for a dog’s delicate stomach.

If you want your dog to have the runs… let them have a portion of these nuggets!

Handy Hint: I’ve also examined all items on the Chick-fil-A menu, including rumor they give out dog treats. Here’s the truth.

Here’s what I found out:

Again, it all depends on the size of the portion, but it’s still not ideal, particularly when you look at the most shocking ingredients in the nugget recipe.

Dogs can eat frozen chicken nuggets, just make sure you cook them first! Of course, I am joking.

As with the other advice in this guide, it all boils down to the recipe, quality of the chicken, and whether they are covered in batter.

If you do cook them, remove the batter, and feed in moderation only.

Of all the commercially available frozen chicken nuggets, the Tyson brand recipe looks to be the best for a dog. They include no artificial ingredients but… and it’s a big but; there are traces of onion and garlic.

Whilst it’s not enough to poison a dog, you still want to be careful with pooches who might have delicate stomachs.

So, to conclude, dogs can eat Tyson chicken nuggets, but I’d draw the line at two or three. And here’s the calorie counting like with the other ones listed in this guide.

Whilst it might on the surface appear to be a good choice, vegan meat substitutes aren’t really designed for dog’s digestive systems. Many vegan substitute meats, including those in vegan chicken nuggets, will contain ingredients bad for dogs.

This can include the nuggets being heavy on the spice, heavy on salt in improve the taste, plus containing onion and garlic, both of which are toxic to dogs.

Soy is another ingredient commonly found in vegan chicken meat substitutes. Soy has been linked to health risks in dogs.

So, to conclude, I don’t think dogs should be allowed to eat vegan chicken nuggets.

Unlike vegan chicken nuggets, the Quorn nuggets don’t contain soy. That means in theory, they should be safe for dogs to eat.

But Quorn chicken nuggets are high in calories compared to other brands, so you might want to stick to very small portion sizes – and without the crispy batter of course!

While you should always err on the side of caution when it comes to feeding your dog any kind of junk food, it’s understandable why chicken nuggets aren’t always taken as seriously as other snacks.

It’s easy to understand too; after all, it’s chicken, right?

Well, yes, but at the same time some chicken nuggets are not good for dogs due to the processed meat, the flavorings, artificial ingredients, and fatty batter.

Letting your dog eat chicken nuggets should really be completely avoided unless there really is no other option.

Here are other popular guides relating to what you can or can’t feed your dog: