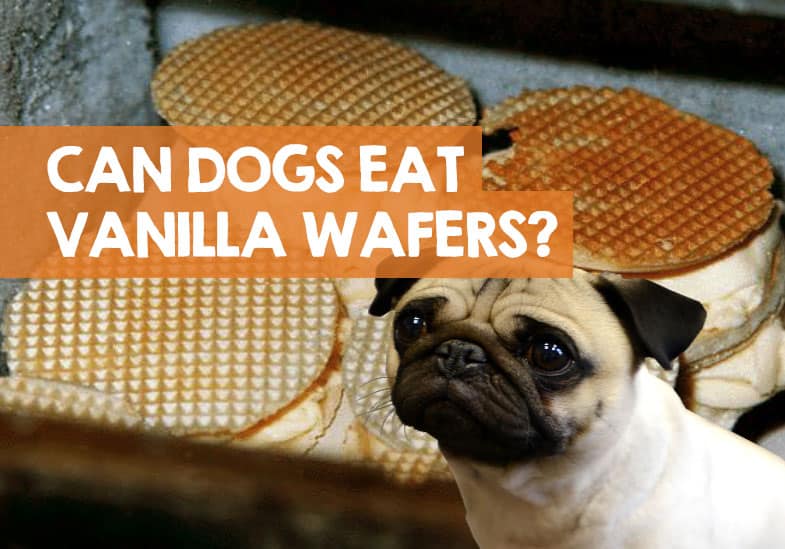 As a kid I would spend every Sunday at my grandmother’s house. After our dinner she’d let me sit down in front of the TV with some vanilla wafers and a glass of milk. She’d give me half the packet, and let her dog have the rest. Yes, her dog loved vanilla sugar wafers, and yes, her dog was very fat.

This memory came back to me last week when I let my own son have some of those Nabisco Nilla wafers. He dropped one on the floor and our own dog Claude was there in a flash, gobbling it all up – I decided to see what the health complications could be.

That does sound quite dramatic I agree, and in truth, most dogs can eat human vanilla wafers in small quantities and won’t show any immediate signs of an issue.

However, if this habit develops it could lead to a fat dog, and even possibly encourage the onset of canine diabetes. Processed sugars are bad for dogs, and there’s loads of this in vanilla wafers, even the homemade ones.

Just look at the ingredients and tell me this is something you would really want your dog to eat?

Once dogs get a taste for vanilla wafer cookies, they will go crazy for the vanilla smell every time – so you could be making a rod for your own back and creating a bad habit!

Instead, I would always recommend that you buy specially make doggy treats. There are plenty you can buy which are going to taste just as good to your dog as vanilla cookies. For example, check out these sweet looking dog snacks on Amazon.

Why the sugar in vanilla wafers is bad for dogs

With the high sugar levels of vanilla wafers, we need to be really careful about letting our dogs eat them. Dogs can get high blood sugar levels and diabetes, plus rotten teeth just like us humans.

Too much sugar in a canine diet can result in (source PetMD.com):

Handy Hint: I have also conducted an investigation into how healthy or bad vanilla ice cream can be for dogs.

I’ve already discussed the sugar content of vanilla wafers, and that leads on well to the calories in them which can affect your dog’s weight.

For example, did you know that…?

We own a French Bulldog who weighs 25 pounds. This is about average for this breed, which means he should not be having any more than 625 calories each day.

When you look at how many calories are in a pack of vanilla wafers, it’s a sure sign that they will be very bad for your dog!

No wonder my grandmother’s dog was so fat!

If my own dog was to eat 8 vanilla wafers from the Murray brand, no only would that be a huge amount of sugar for him to deal with, but it’s also 37% of his recommended daily calorie intake.

You might not think that 37% sounds like a lot, but it really is because it goes against the widely adopted 90/10 rule on doggy snacks… in other words, snacks should only account for 10% of your dog’s daily food intake.

There will always be a far better alternative to letting your dog eat vanilla sugar wafers or cookies. If you love and care for your dog, it should be off the menu.

But, honestly, one probably won’t harm them.

However, always consult with your vet, as vomiting and diarrhoea could occur, particularly with puppies whose digestive systems aren’t as robust.