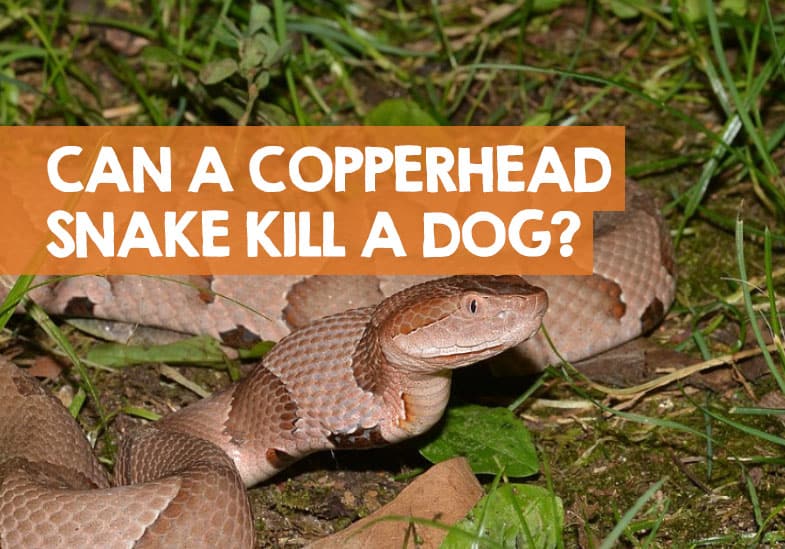 On average, it is estimated that a staggering 150,000 animals are bitten by snakes in the United States every year, with dogs proving to be the amongst the most vulnerable of our pets. The golden question is whether a copperhead bite fatal to a dog.

Read on to find out what I’ve learned about what to do if your dog gets bit by a copperhead to avoid a fatality.

Can a copperhead kill a dog? It is possible for a copperhead snake bite to kill a dog, but often the first bite will be a “dry” bite warning with no venom. The deadliness of a copperhead bite to a dog will depend on the size of the dog, how much venom was delivered, and where the bite on the body was.

In the majority of cases, dogs will survive a copperhead bite. According to the Center for Pet Safety, the death rate statistics from copperhead bites in dogs is low:

“Copperheads are dangerous but have a very low death rate to dogs from 1 to 10%, unless bitten in the eye or tongue; at this point it is very dangerous with a survival rate of about 10% we were told.”

If your dog is bitten by a copperhead snake you should seek immediate veterinary help. Vets will often treat dog copperhead bites with pain medication, antibiotics, and fluid therapy. Occasionally an antivenom will be used.

Handy Hint: Compare the death rate in dogs from copperhead bites to how likely it is your pooch will survive a rattlesnake bite!

Symptoms of a copperhead bite in a dog

As an owner, it is important that we recognize when our dogs are showing the symptoms of a Copperhead bite.

Symptoms can vary from dog to dog, but some typical warning signs are more common than others. The most common side effect of a snake bite in dogs is sudden weakness, often followed by them collapsing. Shaking and trembling is next, followed by diarrhea and vomiting.

Other symptoms a dog can show from a copperhead bite are as follows; blood in the urine, frothing or drooling from the mouth, dilated pupils, and in some extreme cases, even paralysis. Some dogs may even show visible puncture wounds in certain instances.

Handy Hint: I’ve put together a more in-depth guide to the symptoms of a copperhead bite in a dog which lists them all, with what you will need to do.

What do you do if your dog gets bit by a copperhead snake?

There are some things you can do to prevent a copperhead snake bite from killing your dog,

The first thing we should do is to make sure we comfort the dog, as it is likely to be extremely distressed. Panic and increased stress levels can cause the venom in the dog’s system to be circulated more quickly, so making sure you remain calm as this will help boost your dog’s chances of survival.

If there are any visible bite wounds, it can be helpful to wash them with water as this may help to remove some of the venom.

After that, it is important that we focus on getting the dog to a vet immediately. Most dogs survive snake bites, especially from copperheads, but time is still vital when trying to increase the likelihood of your dog’s survival.

If it is not possible to move your dog by yourself, it might be worth calling a friend who is close by or failing that, the relevant emergency services. You should also make sure not to touch the bite or try to treat it on our own. It can be very tempting to want to take immediate action ourselves (it is only normal that we want to help our beloved best friends feel better), but often we will only succeed in making the situation worse.

Once at the vets, our dog will be in the best possible hands. The vet will likely ask what type of snake it was and administer the appropriate treatment, possibly including an antivenom in rare cases. They may also ask to keep your dog in overnight for monitoring purposes.

Soon after, you should be given the go ahead to take your dog home. They may be anxious when they are first picked up from the vet, but they will soon settle down when back in a familiar setting.

Although snakes are often docile unless provoked, dogs (likely due to their curious natures) are regularly bitten by copperheads in the United States, and unless treated quickly, these bites can prove to be potentially lethal to our furry friends.

It is important that we don’t immediately panic, though.

According to online statistics, the mortality rate for dogs bitten by a snake ranges from 1% to 30% in the United States. As already mentioned, it is lower with copperheads, with dog death rates in the 1 to 10% range.

Although this is still high, it shows that there is a good chance that a copperhead bite will not kill your dog, and your four-legged friend will make it through the ordeal after being bitten. Of course, it is also important to understand that dog copperhead bite survival rates very much dependent on the breed and size of the dog, with smaller breeds being vastly more vulnerable.

So, what steps can we take to keep our dogs safe from copperheads? Below, I have provided a few tips and suggestions to help keep those tails wagging happily.

Smaller dogs should be provided with extra level of attention due to their size and high prey drive chasing instincts, and we should remain extra vigilant when walking them anywhere in the woods. It is generally a good idea to avoid long grass too, or any large rocks where a cold-blooded copperhead may be hiding.

Likewise, we can reduce the chance of copperhead taking up residence in your backyard by removing any piles of leaves and rocks, and by keeping the grass neatly trimmed. Looking under bushes can be helpful too, and any area a snake can take shelter is worth checking, from time to time.

Handy Hint: Some pet owners say that their dog’s poop helps to keep snakes away from their property, but just how true is this?

Things like holes in the ground should be filled in too, and we should be careful not to leave out food, which can attract snakes. It might even be a good idea to make a habit of regularly mowing the lawn (being careful not to hit anything in the grass!), as loud noises or movements can potentially disturb snakes and cause them to move on elsewhere.

If we are living in an area where copperheads and other venomous snakes are particularly common, then it might be a good idea to invest in a snake-proof fence. Although somewhat costly, these can keep both dogs and other dogs safe.

Another alternative is to try and snake-proof existing fences by filling in the gaps between wooden planks, concrete, or other building materials.

How to identify a copperhead snake before it bites your dog

Knowing the difference between copperheads and other similar looking species of snake can be quite useful for a dog owner. Copperheads are venomous (although not on the end of the highly venomous scale), whilst the two species it is often confused with are not.

Copperheads are a type of venomous snake native to the southern and eastern areas of the United States and are found in a range of habitats from mountains, swamps, and plains.

Protected in Iowa, Massachusetts, and New Jersey, there are 3 distinct subspecies to watch out for. Copperheads are regularly encountered in suburbs too, often startling gardeners, or children playing outside in the grass.

Copperheads are best known for their distinctive hourglass-shaped markings, coppery tan color (which is where they get their namesake), and triangular-shaped head. They are often found curled up in leaves and will shake their tails like rattlesnakes when disturbed.

Milk Snakes are non-venomous and are more docile than copperheads. They sport irregular shaped blotches all over their bodies and have a unique and lightly colored “Y” or “V” marking on the back of their heads.

Common water snakes are non-venomous too but are usually a little more grumpy when compared to Milk Snakes. Like Copperheads, they have hourglass-shaped markings, albeit in reverse. With age they turn progressively darker, eventually no longer resembling copperheads.

Although copperhead snakes rarely bite dogs unless threatened, according to statistics by the U.S Food and Drug Administration, about 8,000 bites on humans are recorded annually and 150,000 bites on pets.

In conclusion, yes, a copperhead bite can kill a dog, but it’s not always going to be fatal and, in most cases, can be treated quickly and successfully by your vet.

I regularly write about snakes and dogs. Here are some links to the most recent content on these topics.