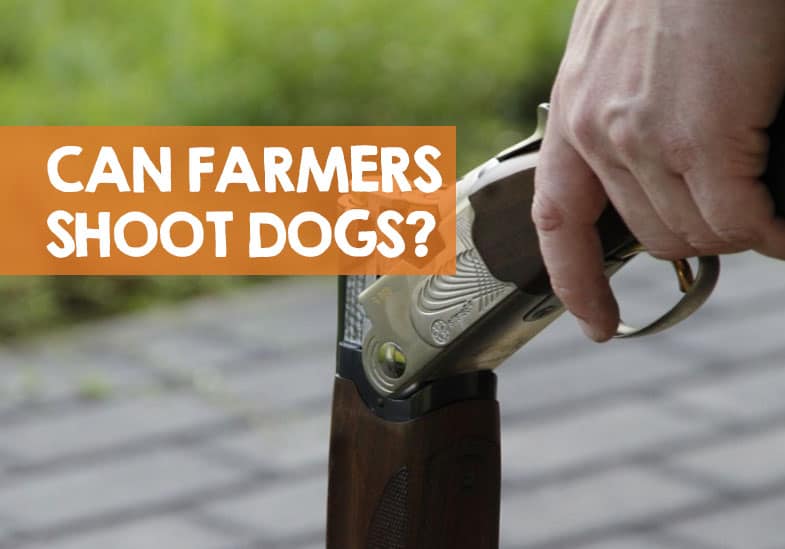 Last week I was walking on a public right of way in the New Forest when we saw another person’s dog stray off a path, under a fence, and into a nearby field of sheep. The dog had a funny 5 seconds running about like crazy before coming back to the owner. Whilst the sheep were far away, I suspect the dog worried them.

But what happened next was really scary. An angry farmer appeared at the gate screaming threats at the owner. I watched from afar and understood the anger; angry enough that the farmer threatened to shoot their dog.

When I got home, I decided to research whether farmers can legally shoot dogs, and what their rights are in the UK. To be clear, I know that out of control dogs can kill livestock and it’s a serious issue for farmers in the UK.

Can a farmer shoot a dog? Farmers have a legal defence to shoot dogs on their land if the dog is worrying their sheep and livestock to the extent where injury to, or death of farm animals could occur. It’s not a legal right to shoot dogs as such, as these criteria will need to be met and proven.

The whole issue is a very grey area as you will find out when you read on.

Do farmers have the right to shoot dogs in the UK?

I will now share with you all I found on whether farmers to have the right so shoot dogs on common land or private property.

You can read what I discovered below, as well as details on how other countries such as Australia and New Zealand work.

Firstly, here are the key observations from what I’ve found:

What the law says about farmers rights to shoot dogs

Sheep worrying is a criminal offence and farmers are allowed to take action against the dog owner. But this doesn’t necessarily mean they have a legal right to shoot dogs on their property.

What they do have though is a legal defence, as according to UK law, farmers can shoot dogs if they can prove that it was the only way they had of stopping the dog from worrying the livestock.

This is what people often refer to as a “farmers’ right to shoot dogs” but, it’s not that simple.

Farmers cannot simply shoot any dog on their land for trespassing. If the read the law carefully, it’s quite specific; for example in the Dogs (Protection of Livestock) Act of 1953, it reads:

“If a dog worries livestock on any agricultural land, the owner of the dog, and, if it is the charge of a person other than the owner, that person also shall be guilty of an offence under this Act. “

Worrying of livestock is defined as being when a dog chases the animals in such a way that there’s the risk of causing an injury to the sheep, an abortion, or miscarriage.

Dog owners can be fined up to £1,000 if a court can prove that their dog worried the sheep in a farmer’s field, resulting in injury, loss of life to animals, and financial loss.

Can farmers legally shoot dogs then?

Farmers can legally shoot a dog on his land, but the shooting would need to fulfil certain criteria, which will need to possibly be proved in a court as part of a civil action. In the Animals Act of 1971, there are some clear guidelines in Section 9 as follows:

“Section 9 of the Animals Act 1971 provides that the owner of livestock, the landowner or anyone acting on their behalf, is entitled to shoot any dog if they believe it is the only reasonable way of stopping it worrying livestock. Such action must be reported to police within 48 hours.”

It also appears to be a civil offence, rather than a criminal one.

As you can see, it’s quite murky from a legal perspective, because if a farmer did shoot your dog on their land, they would have to prove that it was the last resort they had.

As a dog owner, your legal representation could then argue back against the farmer that it wasn’t necessary to kill the dog. Another law can then be brough into proceedings which is the Animal Welfare Act of 2006 which states that it’s an offence to cause unnecessary suffering to dogs.

For example, if the farmer shoots your dog and the dog doesn’t die immediately, that could be how the farmer is then prosecuted.

The bottom line is; if a dog worries sheep and the farmer shoots it, there could be a quite a few legal wrangles to come from both sides.

In February of 2020 there was a press report from the South Downs involved a dog savaged sheep on private land. A police spokesperson issued a statement including the following words:

“Livestock worrying does have a significant effect on the animals involved, on-farm businesses and on farmers whose livestock is harmed through no cause of their own. We urge people to keep their dogs on a lead while they are walking in rural areas and around livestock. Additionally, a farmer can legally shoot a dog that is chasing livestock.”

Sheep worrying has a financial and ethical consequence

Research published by Sheep Watch UK in 2016 concluded that 15,000 sheep are killed each year by dogs off their leads.

In January 2020, NFU Mutual conducted a survey of 1,320 dog owners. The results of the study were revealing, with the following data collected:

“86 % of dog owners exercise their pets in the countryside, with over 63% letting them roam off the lead. 6% of owners admitted that their pets had chased livestock in the past. The number of incidents reported to us shows only part of the picture, as not all farmers have insurance in place to cover livestock worrying and based on claims to us, we estimate the cost to agriculture was £1.2 million in 2019.”

It’s not just the financial implications that need considering though. Dogs worrying sheep and livestock can lead to sheep deaths through stress and the miscarriage of lambs.

Given these factors, it’s no wonder many farmers want the right to shoot dogs worrying sheep.

Can a farmer shoot a dog on common land?

There are no laws I can find which specifically relate to common land. At this point, you should assume that farmers can shoot dogs on common land, if the dog is worrying their sheep or livestock.

You should seek professional legal advice for confirmation on this one.

Researching into UK farmers’ rights to shoot dogs was really interesting, so I wanted to compare it to other countries such as Australia and New Zealand. I also wondered if there were any variations in the law within the UK; for example, are England and Scotland any different?

Here’s what I found out.

Whilst Scotland falls under the UK, the Scottish Parliament has passed acts relating to animal welfare. However, having looked briefly, the laws appear to the same as the overall UK ones already referenced in this guide.

Can a farmer shoot a dog on his land in Australia?

The law in Australia is very similar to the UK, with the following statement taken from the Queensland Government website:

“You can legally shoot a wild dog but you cannot shoot a roaming domestic dog unless you reasonably believe the dog is attacking, or is likely to attack, your livestock and is not under someone’s control… you live on land that is subject to a rural fire levy… you comply with other laws such as the Animal Care and Protection Act 2001.”

How to prevent a farmer shooting your dog

You need to assume that if your dog gets onto farmer’s land and starts to worry their livestock, then there’s every chance the landowner could shoot and kill your dog. You can then worry about the grey areas of the law afterwards.

To stop it from happening in the first place, follow these tips.

What farmers can do

In conclusion, it’s possible that a farmer will shoot your dog if it’s trepassing on his land and is worrying sheep and livestock. Whilst a farmer doesn’t have a right to shoot a dog, he can mount a legal defence if circumstances allow.

Always assume that it could happen.

Disclaimer: The information in this guide is correct as at 21st August 2020 based on the research I’ve done. Please do your own research into the law and seek professional legal advice as it might have changed since the publication of this guide.