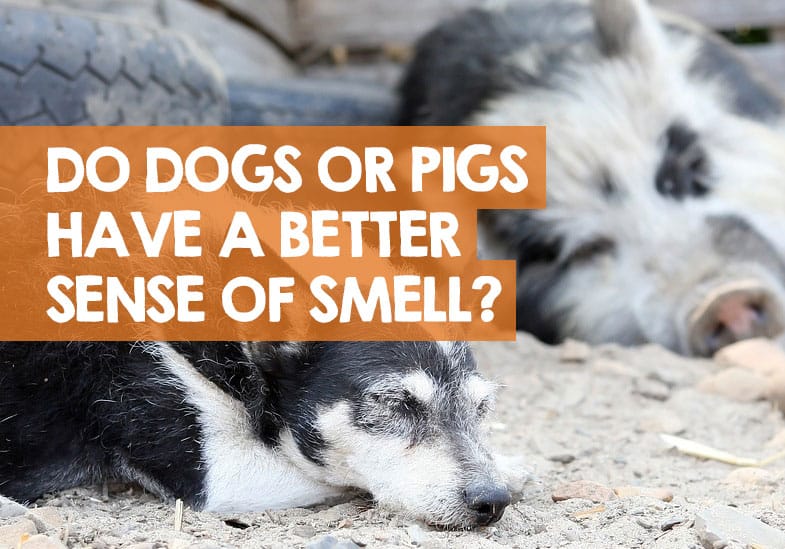 What exactly does this mean, and how do olfactory receptor genes play a part? Read to find out what I discovered when researching the sense of smell in pigs versus dogs.

Do dogs or pigs have a better sense of smell?

According to Wikipedia, olfactory receptors are very important when it comes to smell.

“Olfactory receptors (ORs), also known as odorant receptors, are expressed in the cell membranes of olfactory receptor neurons and are responsible for the detection of odorants (i.e., compounds that have an odor) which give rise to the sense of smell.” (view source)

The reason this is important is due to a study I found by Yoshihito Niimura of the University of Tokyo. In 2014, with help from his colleagues, he conducted research into a selection of mammals to look at sense of smell.

They did this by comparing their genome sequences, checking to see how many olfactory receptor genes each mammal had. This can be used as an indicator for how well an animal can smell.

Here are how those mammals ranked from best to worst sense of smell, in terms of how many olfactory receptor genes they had on average:

Notice that dogs rank in position 8, with 811 olfactory receptor genes. Interestingly though, his research didn’t include standard pigs. Guinea pigs, yes, but they don’t really count.

But I then found further research in a study called The Pig Olfactory Brain from 2016 which stated the following:

Did you see that? It says that pigs have 1,113 olfactory receptor genes which would place them above dogs in the Yoshihito Niimura ranking table for sense of smell.

So, based on what I have researched, I can only assume that pigs have a better sense of smell than dogs.

Admittedly though, I am sure there’s more to it than just the genes. For example, did you know that the reason Beagle dogs have long flappy ears, is to sweep smells up from the floor to their nose… for better smelling and tracking!

Pigs don’t have that luxury, so what is it that gives pigs such a good sense of smell compared to dogs. I looked into that too!

Why do pigs have a good sense of smell?

Like Beagle dogs who use their ears to help them smell, pigs also use their bodies. Pigs have lots of glands all over their skin which help to transmit odors to their super snouts.

A pig can smell for up to 7 miles in distance. That’s sense of smell around 2,000 times better than a human!

The wild pig’s sense of smell is well developed, and they rely strongly on it to detect danger and search out food. They are capable of sensing some odors 5 to 7 miles away and may be able to detect odors as much as 25 feet underground! Appealing to this tremendous sense of smell is often essentially as fermented or scented baits can provide additional attraction to make them more vulnerable to trapping.” (view source)

Compare this to dogs who also have a good sense of smell, but canines depend more on their eyesight than pigs do to help them source objects. Dogs can also use their mouths once the object is found a lot better than pigs can – so pigs need to rely more on smell than dogs do.

Handy Hint: Does your dog snort like a pig when excited? Here’s why they do it.

If their smell is so good, why don’t airports and police use them?

Believe it or not, pigs have been used by law enforcement due to their superior sense of smell. In fact, there was a pig used in Germany in the 1980s specifically as a drug and explosives sniffer hog.

The World Animal Foundation also say this on their website:

“A pig’s sense of smell is so keen that the animal is trained in France to unearth truffles. Using their snouts as shovels, pigs toss clumps of soil and twigs high into the air, searching for the rare and delicious fungus that grows underground near the roots of oak trees. They are also used by police to help search for drugs.” (view source)

Given pigs can possibly smell better than dogs, and the fact they have been used by police in the past, why don’t we see them in the line of duty more? Well, I think it boils down to a few factors, such as:

Pigs are great at sniffing out truffles, and potentially have a better sense of smell than dogs. But does that mean the will replace sniffer dogs? Absolutely not. I can just picture the carnage now of a police officer trying to control a pig at an airport – it’s not going to happen!

Dogs have a sense of smell good enough for the work they do, but have the added advantage of being trainable, loyal, and by our sides at all times when we need them!