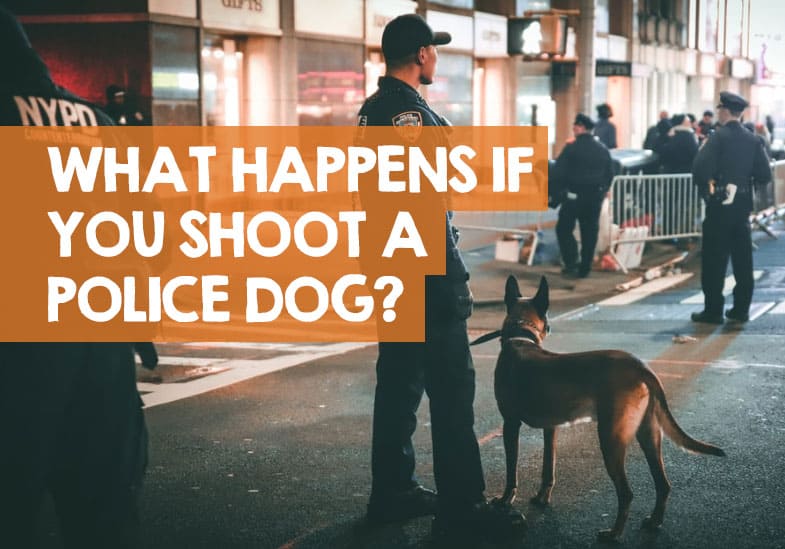 Dogs have been serving alongside police officers since 1888 when UK police trained two bloodhounds, hoping they would be able to help catch the infamous Jack the Ripper killer. Fast forward to present day, and it’s estimated that there are 50,000 active police K9 dogs serving in the United States.

It’s a dangerous job, and these animals frequently put their lives on the line to help protect and serve. In fact, on average 16 police K9 dogs die each year whilst serving, some of whom are shot and stabbed by criminals.

To think that some police dogs have been shot whilst doing their jobs is heart-breaking, and it made me wonder what the consequences are to those people that happen to kill a police K9… I decided to find out.

What happens if you shoot a police dog? If you kill a police dog, you will be arrested and charged. Whilst police K9s are technically officers, the law does not treat them as human cops but rather as a piece of property. You could be fined and jailed under a Class D felony.

That’s the very short answer on what happens if you kill a police canine, so here’s more detail with examples from states such as California, Florida, and Texas.

What happens if you kill a police K9?

Whilst police K9 dogs are technically police officers, the law as at March of 2018 does not treat them in the same way it would a human officer.

It is a common misconception that police K9s are exactly the same as humans in the eyes of the law. But, it’s not true, so the charge for killing a police dog is going to be very different.

Instead, police dogs are seen as property according to civil law.

For example, if you look at Arizona law where there was a recent case of a police dog being shot, the criminal wasn’t charged with attempted murder. Instead, Arizona laws sees police canines as service animals, and bringing harm to one will result in the charge of a Class 6 felony.

This is the lowest of all felony classifications in Arizona and if charged and convicted, the guilty party who attempted to shoot and kill the police dog will get prison time. But the length of the sentence will be nowhere what you would get for killing a police officer.

The bottom line is this; what happens if you kill a police k9 will depend on what state you are in. Each state appears to have their own laws and penalties on shooting and killing police dogs.

Here are some more examples…

Penalty for killing a police dog in California

According to California Penal Code 600, the penalty for killing a police dog in California is one year in a county jail and (or) a $10,000 dollar fine. To quote the penal code section:

“Intent to inflict such injury or death, personally causes the death, destruction, or serious physical injury of any dog, shall, upon conviction of a felony under this section, in addition and consecutive to the punishment prescribed for the felony, be punished by an additional term of imprisonment in the state prison for one year.”

Penalty for killing a police dog in Connecticut

I read a news article recently which said there was a bill going before the Connecticut General Assembly’s judiciary committee. It is intended to increase the penalty for killing a police dog in the state.

“The bill, SB241, would increase the penalty for intentionally injuring a police dog from a Class D felony to a Class C felony. The maximum penalties for conviction of a Class C felony in Connecticut are 10 years in jail and a fine of $10,000.”

The news article went on to say:

“The penalty for killing the service animals would increase from a Class C felony to a Class B felony. Those convictions could have a maximum penalty of 20 years in prison, unless the felony is first-degree manslaughter with a firearm — in that case the maximum sentence could be 40 years.”

So, in this state, if you shoot and kill a police dog you might end up serving 40 years of jail time.

Penalty for killing a police dog in Texas

The charge and penalty for killing a police dog in Texas is a felony of the second degree. It is laid out in the Texas Penal Code 38.151 (Interference with Police Service Animals) and states:

Penalty for killing a police dog in Florida

In April of 2019, a bill was signed in Florida to give courts more power to impose tougher penalties on people who kill or seriously injure police dogs in the state. The crime is now a second-degree felony punishable by up to 15 years in prison, compared to 5 years as a third-degree felony previously.

The change in the law was a result of a police German Shepherd being shot by car jackers.

Handy Hint: Here’s why German Shepherds are used by police as their dogs all over the world.

Killing a police dog in self defense: the UK law

Moving across the Atlantic now to the UK, and they have a very specific law on killing a police dog in self defense.

In 2019, UK members of Parliament passed a new bill which was aimed at preventing criminals claiming the self defense line when hurting police dogs.

The amendment to the law came about after a police dog named Finn was stabbed in the line of duty, almost dying.

The perpetrator was not jailed for hurting the dog, but only the offence of criminal damage which was the criminal act being committed at the time the K9 intervened. You can read more about it in this BBC news report.

How many police dogs have been killed in the line of duty?

In 2017 a study revealed that 96 police K9 dogs had died between the years 2011 and 2016 whilst on active service. Surprisingly the main cause of death isn’t by gunshot or stabbing, but instead due to heat exhaustion.

The study also found that:

“Most (86.5%) police dogs that died in the line of duty were male, with only 11 female police dog deaths recorded.”

If you wish, you can purchase and download the full piece of research from this link.

To conclude, penalty for harming a police dog will be different depending on where you are in the United States. But rest assured one thing that does happen when you shoot a police dog is a huge outcry from the media and public.

I regularly write about the laws surrounding dogs and their welfare with some recent topics including: