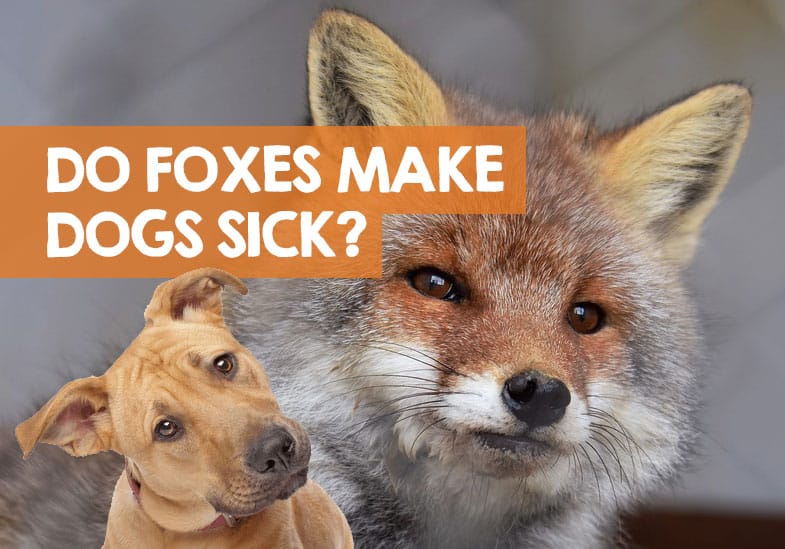 Foxes are increasingly becoming more urban, moving closer and closer to our homes. In fact, in the UK as one example, there’s estimated to be 150,000 urban foxes living in towns and cities, making their population nearly 5 times larger than was estimated in the 1990s.

As foxes become more brazen, challenges arise with one issue being the potential for foxes to give dogs diseases. But what is actual risk here, and should pet owners really be concerned that foxes can spread disease to their dogs?

I decided to do some research into what the reality is of foxes making dogs ill and sick in both the United States and the UK. I found out what dogs can catch from foxes, and whether you should even be worried about it. Here’s the short answer first.

Wild foxes can make dogs ill and it is possible for foxes to pass disease to dogs. The most common diseases and illnesses happen when dogs eat fox feces to develop roundworm or get mange from fox mites. Dogs can also develop an infection or catch a disease after being bitten by a fox.

In the rest of this guide I am going to detail what dogs can catch from foxes, how common those diseases and ailments are, and what steps you can take to prevent your dog getting sick from a fox in the first place.

What can dogs catch from foxes?

The illnesses that can pass from foxes to dogs will vary depending on where in the world you live. Firstly though, here’s a breakdown of the overall possibilities which I’ve tried to order in how common a health risk they appear to be.

Dogs can catch roundworm from fox’s by eating their feces and ingesting the eggs of the worms in the poop. It’s not uncommon for dogs to eat fox poop, but it’s something you need to actively prevent as it can make your dog very ill.

This is the most common things that puppies can catch from foxes, as younger dogs are far more susceptible to roundworm, plus just like kids, like to put things in their mouth. You will typically notice small spaghetti type worms in your dog’s poop.

Roundworms are dangerous to humans, so you need to be careful that foxes aren’t spreading illness to your dog, and then the dog onto you.

Dogs are curious and will chase foxes. Most of the time the fox will manage to get away, but if cornered it will bite back at your dog. Bites can be treated quite easily by vets, but they do offer the opportunity for disease and sickness to pass between foxes and dogs.

Examine your dog’s skin for any signs of scratches, bites, and bleeding. The wound can lead to a red and angry area, with the possibility of fever. Your dog should be immediately vaccinated to guard against disease.

Diseases and illnesses that can spread through fox bites are rare, but the one that you should be most concerned about is rabies. I explain more about this disease further down the page.

Where there are foxes, you will also find fleas and ticks. If your dog is rolling around in fox poo, he might pick up parasites that have been living on the fox, spreading instead to your four-legged friend.

The diseases that dogs can get from ticks include nasties such as Lyme disease, Ehrlichiosis, Anaplasmosis, Rocky Mountain Spotted Fever, Babesiosis, Bartonellosis, and Hepatozoonosis.

Fleas can also pass some of those illnesses to dogs, plus other sickness such as flea allergy dermatitis, tapeworms, and anaemia.

Also known as leptospirosis, Weil’s disease is a bacterial infection that is passed from foxes to dogs via urine. For example, if a dog was to drink water that was contaminated with urine from a fox with Weil’s disease, it could pass to the dog, and then spread to humans.

However, it is very rare, with the UK’s Health Protection Agency saying there are on average just 40 cases reported each year. It can be fatal though, so it pays to try to keep foxes away from the areas that your dog lives in.

Heartworm is surprisingly common in the UK, with data suggesting up to 7% of dogs could be carrying them. Most dogs will get heartworm from eating slugs, but it’s still believed that it can be transmitted from fox to dogs.

Other worms that could be contracted from fox feces include hookworm, lungworm, and tapeworm.

According to the Wildlife Online website, foxes can also carry illnesses such as:

There is the possibility that your dog can catch these from eating fox poop.

Sarcoptic scabies and mange is common in foxes, and it does have the ability to pass to domestic dogs, although it’s not common. It’s a parasitic mite that burrows under the host animal’s skin, being extremely contagious between foxes.

How do dogs catch mange from foxes?

There are not many cases where it has been confirmed that this disease has spread between foxes and dogs, but it still happens. The UK’s Medivet website says:

“The highly contagious condition is often caught from infected urban foxes (hence the nickname ‘fox mange’), but it can also be passed between dogs through direct contact and shared bedding. It’s often transferred in kennels, dog parks, groomers and animal shelters.”

Providing that your puppy has been fully vaccinated and has all infections up to date, then it’s unlikely that it will catch parvo from a fox. However, it is still possible for dogs to catch parvo from foxes, as it’s a disease that affects all canine type animals.

Despite how contagious it is, it’s unlikely your dog will catch parvo from a fox unless your dog has never been vaccinated.

“Canine parvovirus, or parvo, is a highly contagious and serious disease. It is caused by a virus that attacks the cells of the intestinal tract and bone marrow. It affects puppies, adult dogs, and wild canids such as foxes, wolves, and coyotes.” (view source)

One of the scariest sounding diseases that dogs can get from foxes is rabies. It’s not as much of a concern as you might think though, as rabies has virtually been eliminated from countries such as the UK and Australia, bar being present in some bats and possibly even flying foxes (a bat species).

The numbers are a little different in North America though, where foxes are known to be a rabies carrier. Again though, it’s not a huge epidemic and is probably rare given that in the United States, foxes are only said to report for 5% of rabies cases.

In 2016 there was a call for dogs in New Hampshire to be vaccinated against distemper. The request was via state officials after reports of gray foxes showing symptoms of the disease were made in the state.

Whilst canine distemper cannot spread to humans, it is usually fatal and there is no cure for it. It is a natural virus that could be spread from foxes to dog when they come into contact with each other.

Canine distemper is a disease that is found globally but is not as common as it was in the 1970s, being virtually eliminated in domestic dogs due to successful vaccination programs.

Handy Hint: I’ve written an extensive guide about the chances of a fox attacking your dog (and possibly even eating it)!

How worried should you be?

It depends on where you are, and how your dog interacts with foxes. For example, if your dog is consistently eating fox poop, then yes, the chances of a diseases or parasites passing between them will get a lot higher.

If you keep foxes out of your yard and gardens, for example by not encouraging them with food, then the risk to your dog is probably very small.

What diseases do foxes carry in the UK?

This is particularly true in the United Kingdom where foxes are relatively healthy and don’t pose huge health risks to dogs. A 2006 study published the following statement:

“Like most wild mammals, foxes carry a range of diseases. There is no current evidence that these pose a significant disease risk to humans and/or domestic animals, although more monitoring is needed to determine the prevalence of current disease levels and assess their potential economic impact.”

Based on that, I would assume that whilst foxes can spread disease to dogs in the UK, the chances are actually very slim.

What diseases do foxes carry in North America?

In the United States and Canada, dog owners probably need to be a little more cautious. I found a quote on the website of Connecticut State which stated the following about red foxes:

“Foxes can carry the organisms that are responsible for several contagious diseases, such as mange, distemper, and rabies. Most red foxes die from rabies too quickly to spread the disease to other animals or humans. Nevertheless, animals that appear sick or are acting abnormally should be avoided.”

I think the bottom line is you need to be very cautious no matter where you are in the world, as foxes can give dogs diseases and make them sick. I’d recommend you call your vet even with the slightest suspicion your dog might be ill from contact with a fox.

Despite the popular opinion, dogs don’t actually keep foxes away that well. Foxes have evolved to the human environment, so aren’t as scared as dogs as they once were. This coming together of the species can possibly result in illness.

Dogs are naturally curious. My dog will chase a fox if he sees one, and there’s always that nagging doubt in the back of my mind that he might get ill. However, living in the UK as we do, I think it’s probably an over-reaction.

Having said that, you can never be too careful, so please do get a professional veterinary opinion if you have any suspicions your sog might be sick.

I write about caring for my dog and certain situations he gets into. Here’s a selection of my most recent challenges!