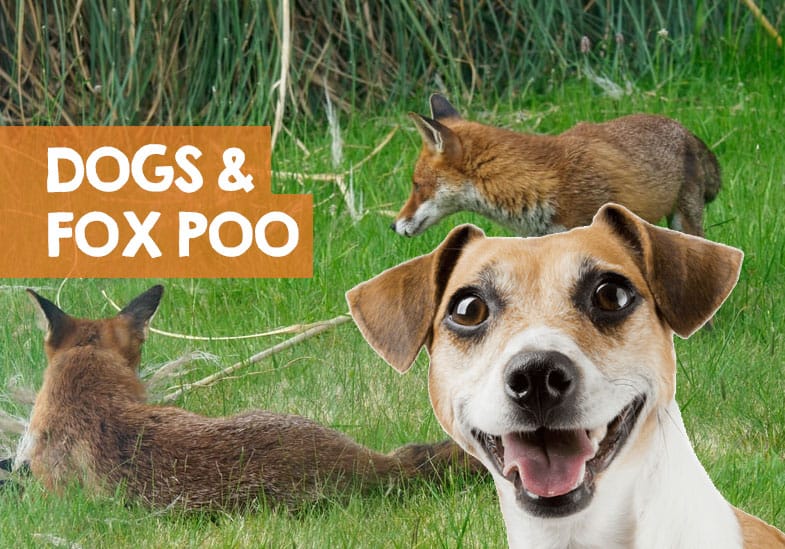 It used to be that only dog owners who lived in the countryside had to worry about their dogs eating fox poo. However, in recent years the increase in urban foxes comfortable with city living has meant more people now need to be made aware of the risks.

If you have a dog that likes to eat fox poo, it might seem harmless at the time. The reality tough is different. Eating fox poo can be bad for dogs as I will explain in detail this helpful guide to what your dog can catch from foxes. I’ve also included some notes on how you can get your dog to stop the habit.

Why do dogs eat fox poo? There are many reasons why some dogs like to eat fox poo, with the simplest explanation being they like the taste and smell. But some dogs will eat fox poo due to a missing element in their diet, or a possible medical problem.

Is it normal for a dog to eat fox poop?

Eating the poop of another species is very common dog behavior. In fact, it’s so normal that there’s even a name for it; coprophagia. You can read more about it on Wikipedia.

Just because it’s normal, that doesn’t make is right or safe. It does make it more difficult to prevent though. Dogs can also catch a range of diseases and illnesses from fox poop which I will discuss lower down the page.

But first, here are all the reasons why dogs like to eat fox poo.

It might make you feel sick, but for dogs, fox dropping is an amazing snack. The reasons why fox poo is so tasty to them makes a lot of sense; it’s all related to what foxes like eat.

Foxes, particular urban ones, like to forage and scavenge from bins, just like I am sure you’ve seen your dog do before. Like dogs, foxes aren’t fussy and will eat human’s leftovers, meat, rodents, berries, and fruit.

Imagine what all of that packaged up into one neat poop might taste and smell like to a dog? Heaven for them surely, as it would be like dining at an all you can eat buffet.

When you consider how good a dog’s sense of smell is, they will sniff fox poo out from a long way off and be able to home on to it and have a good munch.

2. To protect their pack

Dogs are said to still have many instincts left over from the ancestral days of being wolves and wild dogs, and this relates to the next possibility; dogs like to eat fox poop as a way to protect their pack and younger relations.

I found this theory in a 2012 study into canine behavior, and here’s a quote:

“A hypothesis is offered that coprophagy reflects a tendency inherited from the ancestral wolf to keep the den area free of faecal‐borne intestinal parasites that might be deposited in the den resting area and would typically have parasite ova that are not initially infective, but could develop infective larvae after 2 days. An evolved parasite defence strategy to consume fresh faeces in the rest area would be adaptive.”

3. As investigative and scavenging behavior

Puppies are like human babies in so far that they like to explore and investigate the world around them by putting things in their mouth… and this extends to animal poop.

Younger dogs of puppy age are also massive scavengers and will eat anything they see. This is something most will grow out of, but it’s all down to them being worried that food will get taken away from them.

4. To replace nutrients or an enzyme deficiency

Dogs also like to eat fox poop due to a problem in their diet such as not having the right nutrients or enzymes they need.

Fox poo can compensate for this lack of elements in the dog’s diet due to the concentration of enzymes and partially digested proteins found in it.

This again is very common behavior, and in fact lots of animals are known to eat the poo of other species because of this. On the American Kennel Club website they say:

“For some species, such as rabbits, eating fecal droppings is a totally normal way of obtaining key nutrients. In fact, if you prevent rabbits from doing this, they will develop health problems, and young ones will fail to thrive.”

Sick dogs can also eat fox poo to help make themselves feel better. For example, if your dog has worms or parasites, they will lack in nutrients and can replace it by eating poop.

Dried fox poo can often closely resemble a dog snack so it’s no wonder your four-legged friend hones in on it.

Dogs are so food-orientated that once they lock on to the smell of fox poop it’s going to be very hard to persuade them that’s it’s not a tasty dog treat. You can’t blame them for wanting to have a chew despite how horrible it might look to us!

7. Your dog is just hungry

And finally, it might be just because your dog hasn’t had enough to eat that day. Before you go anywhere with your dog where the chance of finding the traces of foxes is high, make sure they’ve had a meal, or you take some alternative snacks with you.

Handy Hint: Dogs love to roll in fox poo and the smell can stay on their coats for weeks. There is a solution to it though which I’ve described in my helpful guide to cleaning fox poo smells off a dog.

Is fox poo harmful to dogs?

The bottom line is this; it is bad for dogs to eat fox poo. Whilst it’s not toxic or poisonous in the traditional sense of the word, it can contain parasites such as hookworm and tapeworm that can lead to disease such as echinococcosis.

Can dogs catch anything from foxes?

Here’s a list of all the reasons why fox poo is dangerous to dogs, so you take steps to stopping them from eating it or rolling in it, so they don’t catch anything nasty.

A study was published in 1995 which showed how 68% of foxes are infected with hookworm. Hookworm can pass out via fox faeces, which when eaten can then pass to your dog.

The reason why this is so dangerous is it can actually kill puppies. Older dogs will usually recover a lot better, but will experience weight loss, diarrhoea, and other nasty symptoms.

It’s not only your dog that can contract echinococcosis from tapeworm in fox poo, but also us owners. According to the Fox Website, the following harmful risks are possible:

“When pets come into contact with fox faeces (droppings), pets and their owners are at risk of contracting echinococcosis, a disease caused by the fox tapeworm. To be infected, humans as well as pets need to ingest the parasite eggs, for instance by eating berries contaminated with fox faeces containing fox tapeworm eggs. This disease can be fatal in humans.”

This parasite is another potential killer that is contracted from fox poo. It can lead to lung and heart disease, breathing difficulties and seizures.

If caught early, the outlook for dogs is generally a good one.

Whilst very rare, there is a very small risk of your dog getting mange from a fox. Typically, this is spread via contact more than faeces, but it’s still a risk to be aware of.

Other risks of harm

It’s not just the worms and mange that makes fox poo harmful to dogs. There are also other nasties and diseases that foxes carry such as:

However, please don’t panic about all of this as I found a quote in a 2006 report, After the Hunt: The Future of Foxes in Britain by Stephen Harris and Phil Baker which concluded:

“Like most wild mammals, foxes carry a range of diseases. There is no current evidence that these pose a significant disease risk to humans and/or domestic animals, although more monitoring is needed to determine the prevalence of current disease levels and assess their potential economic impact.”

It’s worth considering though, that the immune systems of puppies are much weaker than adult dogs, particularly if they have not had their injections yet. My assumption here would be that fox poo is more dangerous to puppies than older dogs.

Handy Hint: I’ve written an extensive guide to what dogs can catch from foxes and how the two species can make each other sick. Click here to find out what the risk to your dog’s health is from foxes.

How do I get my dog to stop eating fox poo?

You will have already considered stopping going to places and area where you are likely to encounter lots of fox poo. It might not always be possible to avoid it completely though, so here are some short tips you could consider:

If you have any concerns, you should always consult with a vet. The notes in this guide are written by me, a dog lover and not a veterinary professional – everything you read here is based on my own online research and opinion.

What I would say is this though; if your dog’s poop eating appears to be problematic and way to regular to be dismissed, you should call your vet.

It’s very common for dogs to eat the poo of another animal, and in fact I’ve written quite a few guides on this topic which are linked to below.

What I would say is always do your own research and talk with your own vet. Everything you read here is a result of my own experiences and what I’ve read, rather than a veterinarian talking.

My dog is an eating machine and likes to scoff on all sorts of horrible things. Here are just some of the terrible things I’ve had to write about!