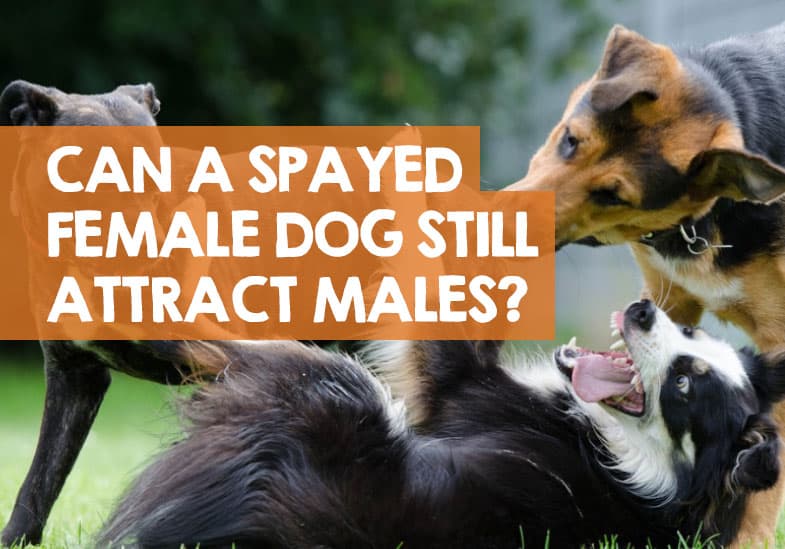 If you’ve had your female dog spayed, you might think that this is the end of them getting bothered by various charming suitors when she’s on a walk, at the dog park or even in her own home amongst over male dogs.

However, this isn’t necessarily true as spayed female dogs can still attract males.

It is said that females can still produce the hormones that attract male dogs even after spaying. Most of the time, these hormones will be very low meaning males won’t be massively interested… but not all the time!

It’s possible that your spayed female has tissue remnants left behind from the spaying procedure. This is what will be producing the hormones so attractive to male dogs.

Alternatively, your spayed female dog could be attracting male due to a medical condition or the scent might not even be her. I will explain more as your read on, including some tips on what you can do to discourage the behavior.

Ultimately, the question of whether a spayed female dog can still attract male mates is an incredibly complex issue.

I’ve researched some of the most common reasons why your spayed female dog still attracts male mates, as well as going through some solutions that might help you to solve the problem.

Did You Know: Dogs can even have phantom pregnancies and will show the signs of a real pregnancy despite them not carrying any puppies.

What it means when a female dog is spayed

Before we can fully answer the question of why spayed female dogs may attract males, we firstly need to understand what it means when a female dog gets spayed.

A female dog’s heat cycle is crucial in attracting male dogs. When a female dog is in heat, they release powerful pheromones to show that they are ‘available’.

Handy Hint: You can see an example of how a dog’s heat cycle works in this blog post detailing the different stages.

With these pheromones indicating to nearby male dogs that there is a female dog willing to mate, the male dog will track the scent in order to find the female dog and mate with her.

Why does my spayed female dog still attract males?

With the OHE procedure in theory stopping your female dog from producing these pheromones, you might be wondering why male dogs are nonetheless drawn and attracted to your dog.

So, here are four possible reasons why a spayed female dog might attract male dogs, some of which I found on the excellent PetHelpful.com website.

If a male dog’s interest in your female dog is reciprocated by them acting as if they’re in heat, then you might want to take your dog to the vets to double check that their procedure went as planned.

Although it is rare, sometimes, a dog’s spay surgery can still leave parts of the tissue behind, which can continue to produce hormones.

To be more precise, I’ve read reports of some dog owners commenting on forums that during their dog’s spay surgery, not all of the ovarian tissue was removed. Subsequently, the tissue left behind grows enough to trigger your dog’s brain to continue the heat cycle.

What this then does is continue to produce oestrogen, progesterone and those ever-important pheromones that might attract your neighbour’s dog! Those pesky hormones will mean male dogs will be attracted to the female still.

If the uterus was completely removed, the good news is that your dog will not be able to get pregnant despite being in heat – but it is important to nonetheless get this double checked by your vet and to have any remaining tissue removed.

So, your vet has checked, and it seems that no tissue from your dog’s operation remains. Why, then, are male dogs still attracted to her? Sometimes, another medical condition might cause your dog to emit a scent that is similar to that of a dog in heat.

You might not be able to smell it yourself, but that doesn’t mean male dogs with their highly advanced sense of smell can’t.

Handy Hint: Did you know that a dog’s sense of smell is so good that they can even smell through vacuum sealed bags?

Whilst the reasons and science behind it is unclear, research has shown that these aforementioned conditions do make a female dog more attractive to a male dog.

Yet, if your dog has the all-clear from these conditions, and your dog was spayed correctly, there is no reason for them to go into heat or act if they are in heat.

So, if a male dog is obsessed with your female dog and the aforementioned reasons aren’t viable, another possibility is that they’ve tracked the wrong scent. In other words, they might have mistaken your dog as the source of another unspayed female dog’s scent.

If not that, it is also possible that if the male dog is unable to access the female dog who is in heat, they will instead direct their attentions to any available female dog: spayed or unspayed.

4. The male dog might be trying to assert dominance

Sometimes, if you come across a male dog trying to mount your female dog, it might be nothing to do with mating at all.

Instead, it could simply be a case of the male dog trying to assert his dominance, which is typical pack behaviour as opposed to reproductive behaviour.

There are several reasons why this might happen. If you are in a communal area with your female dog that a male dog has previously ‘marked’, they may mount your dog in order to mark their territory to them.

Handy Hint: Dogs have many ways of trying to exert dominance. You can read more about these in this list of signs your dog doesn’t have respect for you!

For similar reasons, you might find that if you are introducing your female dog to an existing male dog in the home, the female dog will again be mounted.

Whilst it might seem similar to mating, one dog mounting another to assert dominance is a completely different behaviour that occurs not just with male and female dogs, but amongst dogs of the same sex.

Dealing with a pregnant dog can be both time consuming and expensive. Coupled with the mess and disruption involved with marking and menstruation, it is no surprise that many dog owners decide to take the step of spaying their dog.

Whilst spaying will cure those issues, you might still see your female dog getting unwanted attention from the local male dogs.

You would think that with the right intervention and understanding, your spayed female dog will soon no longer attract male mates.

But, as we’ve learned it’s not always the case.

If you want to stop male dogs from being attracted to your spayed female dog, this means addressing the underlying issues. In the case of a botched spaying surgery, this means correcting the surgery.

So, if you’re concerned about underlying medical conditions, resolving those conditions will stop male dogs going after your female dog.

Whilst there is not a lot you can do about male dogs asserting dominance and misdirected attention from other dogs’ pheromones, what you can do is try and remove the opportunity: namely, by keeping your dog on a short lead and away from male dogs.

I regularly write about what I’ve learned about dog behavior and psychology, and here are some additional guides you might find interesting too.