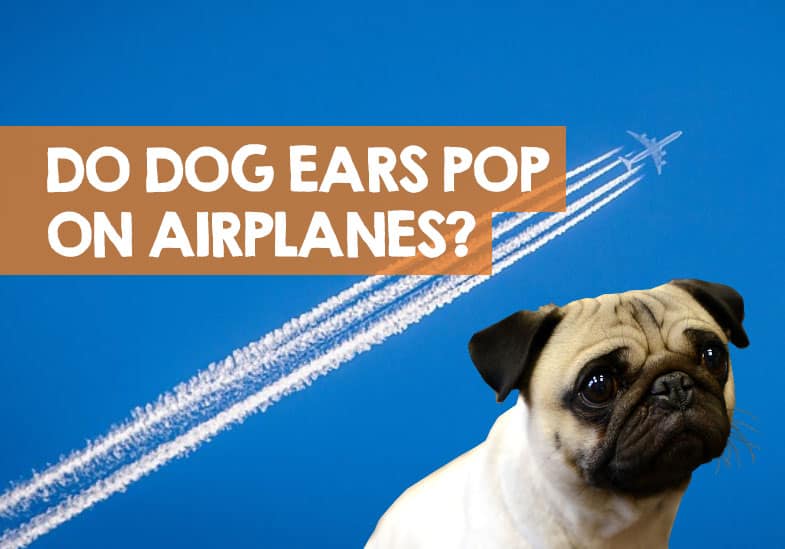 In the past few years, we’ve started to rethink our vacations. Instead of searching for the perfect puppy boarder at home, we’ve started to take our dog on trips with us. So far, we’ve only been traveling by car, but are planning on a plane trip to the other side of the country.

One thing that’s concerned us about flying with our pet was whether dogs can be affected by high altitude, and if your dog’s ears pop when flying. We did some research into it so wanted to share with you our findings today.

Do dogs ears pop on airplanes? Dogs ears do pop when they fly, and they can be affected by high altitudes just like humans can. Human and dog ears are very similar by design, so going high in an airplane can result in the popping and blocked sensation for both us and our dogs.

After a bit of research and a chat with my vet, I’ve learned how you can prepare your dog for high altitude, what dog owners flying small private planes should do, as well as tips for flying on larger commercial flights.

Why dogs’ ears pop on planes

Dogs might not be able to tell us when their ears are feeling funny, but their ears can still pop on a plane the same as human ears do. Ear popping on planes happens due to changes in pressure as the plane adjusts altitude.

Just like we do, all dogs have an inner ear that always has a bit of air trapped in it. Normally, the amount of air inside the ear changes as pressure and elevation change.

When your dog is on a plane, the pressure levels change too quickly for the ear to equalize. You have probably had your own experiences of this when on flights but know to expect it and that it will get better – dogs don’t have this level of understanding.

Here’s a more scientific explanation for why human and dog ears pop at high altitudes when flying:

“Ears pop in airplanes because the air in a plane is less dense than air near the Earth’s surface, because air near the surface has all the air above it pushing down. The inner ear has air trapped in it and as pressure changes, it causes pressure on the ear drum. An airplane ascends, air pressure decreases, and air trapped in the inner ear causes eardrums to push outward.  This causes discomfort felt before ears pop and also a decrease in hearing, as pressure on the ears drums makes the sound harder to transmit.” (view source)

It’s possible for your dog’s ears to equalize the pressure between your inner ear and the atmosphere. It does this by letting some air escape from the inner ear through the Eustachian tubes. The pop sound is the noise of the pressure equalizing.

As you can imagine, this could be quite frightening for a dog. Their ears will feel full and the dog’s hearing could also be muffled, leading to disorientation and panic. They might also feel pain and a distinct popping noise.

You might be planning on flying a commercial plane at high altitude or going on a small private flight. There are a few considerations on both regards your dog’s ears popping, which I will detail below starting off with private planes.

Flying with your dog in small private planes

To reduce the risk of your dog’s ears popping on a small plane, slowly increase your altitude rather than climbing at your usual speed. If you see your dog experiencing and discomfort, start to descend. Signs include yawning, drooling, and stress.

In most cases, general private aviation small planes tend not to fly at altitudes where oxygen needed, but you can get or adapt oxygen masks for dogs. Talk with your vet about this aspect.

Handy Hint: Many owners worry (quite rightly) that their dog will bark on the plane. Here’s what you can do to help stop or reduce the barking from happening.

For most dogs, ear popping is just a weird, slightly freaky sensation. However, if you’re anything like me, you want to do everything you can to reduce the chance of your dog feeling even the smallest bit of pain.

Here are some suggestions that can help your dog’s ear popping at high altitudes and also with the stress they might exhibit with flying.

You can bring a chew toy with you (here’s a good one on Amazon), so your dog can chew away any ear discomfort as rapidly as possible. Some of your dog’s favorite treats can also help but use these sparingly.

Dogs are more likely to get motion sick on planes, and you don’t want them vomiting treats right back up! You also want to avoid them needing to poop on an airplane if possible!

As you go through the airport, you might’ve seen a few dogs wearing adorable little earmuffs. Are these actually necessary?

Well, as long as your dog is in the cabin of a traditional passenger airliner, probably not. However, if you’re in a smaller, private plane, then noise cancelling earmuffs are a good option.  A good rule of thumb is your dog should wear ear protection any time you would.

They won’t stop your dog’s ears popping on a plane but could help with anxiety and stress from all the noise.

As a general rule of thumb, most vets do not advise sedation for dog’s flying on airplanes.

It can lead to unpredictable side effects at high altitudes, including possible respiratory and cardiovascular problems. It also affects your dog’s balance making them more disoriented and unable to brace themselves in turbulence, meaning risk of injury is increased.

Handy Hint: Read my advice on how you can keep your dog feeling calm when on a plane for the first time.

Sedatives can also lead to a loss of bladder control.

However, if you do have a dog with a history of motion sickness, possible mild sedation is an option, but talk with your vet first, and try a test dose before a flight.Instead of sedation, your vet might recommend an anti-anxiety medication. Most dogs do not need these, but it can be nice to have it on hand just in case you notice your dog freaking out once you board the plane.

According to websites I have read, low doses of gabapentin, alprazolam, or trazodone are sometimes used for dogs during a flight, providing it’s been prescribed and you’ve got guidance from a vet.

You might also want to consider comforting your dog by rubbing their ears slightly. This could give them some relief or at least make them know you are there for them.

Dog’s ears are very similar to ours and will pop on airplanes when at altitudes. For some dogs it will be a slight discomfort, for others could be very painful.

The Aircraft Owners and Pilots Association give the following advice:

“If your dog is old, then it’s best to avoid high-altitude flight all together as their hearts may not be able to withstand the hypoxia produced at altitudes above 5,000 feet. Your vet would be able to determine your dog’s individual risk. Any dogs that have naturally labored breathing should also avoid high altitude flying because the thin air could make it even more difficult to breathe. Certain breeds that fall under this category are Lhaso Apso, Chow Chow, Pug, Boston Terrier, Bull Dog, Boxer, Pekinese, and Shih Tzu dogs.”

I’ve written about dogs and planes previously, so you might find the following guides helpful when planning a journey.