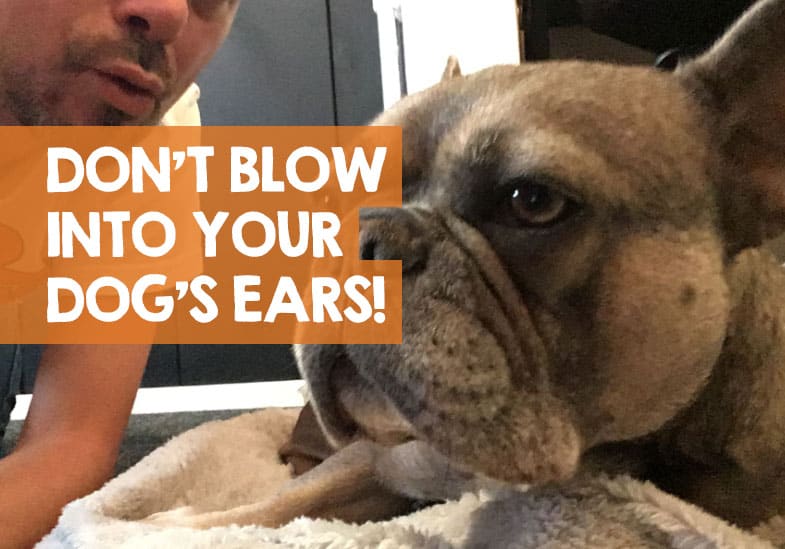 If you’ve ever blown into your dog’s ear, it’s very likely that they hated it. Your dog probably reacted badly, looked upset, snapped at you, or even worse gone to bite you. But what is it about having air blown into their ears that dog’s hate so much?

I decided to look into it some more, so can now present to you all the reasons why dogs hate being blown in the ear, what blowing in a dog’s ear does, and even if it hurts them.

Why do dogs hate being blown in the ear? Dogs hate you blowing in their ears because (a) it catches them by surprise, (b) it is not comfortable, and (c) their hearing is so acute that they might even take it as an act of aggression. It can also lead to dizziness and temporary balance problems.

Those are the reasons why blowing in dog’s ears are bad, but there’s more to it than this. Read on to understand it better and what you should do to make sure you don’t annoy or hurt your dog by blowing air into their ears.

3 reasons why dogs hate you blowing in their ears

1. Blowing in your dog’s ear shocks and surprises them

Most dogs expect humans to come up to them for positive reasons such as a quick pat on the head, being called a good boy, given a treat, or perhaps as the precursor for a fun walk.

They do not expect a sudden gust if air to come from a person into their ear and can make them panic.

It has an effect on their senses and hearing which is very uncomfortable. Canine hearing is far more developed than ours; the ears are ultra-sensitive, meaning a little blow on the ear is far more impactful to them compared how a human would find it… would you enjoy someone doing that to you suddenly and without warning?

When air is forcibly blown into an ear canal it can also cause dizziness and imbalance – both things that would really confuse a dog.

What happens then is that many dogs will instinctively react to having blown into their ears by turning away or recoiling in shock.

When you decide to blow in a dog’s ear, it means you need to be very up close to them, right in their face, and invading their space. This will often result in a dog growling, snapping, barking, or even biting the person doing the blowing.

The reason dogs dislike having people so close to their face and ears, is that they find it intimidating and unpleasant. Many dogs have learned to tolerate it, but when you then also add in being blown on, it might just push that dog too far out of his comfort zone.

I’ve written about this behavior in more depth, in my guide to dog’s not liking it when you stare in their eyes. Some find it threatening, as I explain in the next point.

3. Dogs can misinterpret blowing on their ears as a threat

Whilst you might think blowing in your dog’s ear is funny, they won’t, and it can make some dogs angry and aggressive.

The reason why dogs hate having air blown in their ears is how it can be misinterpreted as an act of aggression. It’s because when dogs blow out air and have puffed cheeks, this often the what happens before a fight.

Dogs will often go for the ears when fighting. You might have seen those terrible photos that animal charities show from illegal dog fights where the ears are torn to pieces.

In a fight, dog’s ears are very accessible to biting due to the way they stand or flop, meaning they are often the target for aggression.

Handy Hint: Not all ear biting is aggressive, as you can find out in this guide to dogs play fighting by nipping at each other’s ears.

When dogs first meet, often they will do the play bow in front of each other. But when things aren’t as playful, dogs can initially go nose to nose with air being blown out of their noses in little puffs or bite at an ear.

While you know that you’re doing it in fun, your dog has no idea whether you blowing in their ears is something that might escalate into a much more dangerous situation.

Therefore, it’s something they can respond to aggressively.

Signs you dogs hates his ears being blown in

You might see some subtle signs at first that you dog doesn’t like his ears being blown on, or the first time might result in something more aggressive back at you.

If your dog finds you blowing in his ears be unpleasant but tolerable, then they will offer a whole range of body language to try to communicate that they’re not happy and to please stop. These can include:

If, however you keep on blowing at their ears and take no heed of their attempt to diffuse the situation, then they may need to take their response up to the next level.

When a dog finds themselves in a situation where they have tried to tell you that they feel worried, but the threat hasn’t gone away, then their instinctual responses kick in.

This also happens when they find something so scary that they need it to stop right away. This means that they may respond in one of four ways:

While we might hope that our dog picks from options 2 to 4, there’s a good likelihood that it is going to be option 1, to fight.

That choice of response is even more likely if you keep blowing on your dog’s ears when they have tried other options without success, such as trying to get away.

You see, from our dog’s perspective, having his ears blown on could be the start of an aggressive attack, and so their response is to fight back. This may mean a growl or a snap or even a bite as they attempt to get the scary thing to stop.

It’s important to know that the growl and snap are a dog’s way of communicating that they really don’t like the situation that they find themselves in at the moment, and they find it pretty scary.

Now, if we heed those signs and stop blowing on their ears, then everything will calm back down.

But, if you ignore them and continue to do it, then there’s a pretty good chance that your dog will be left with no alternative than to escalate the situation to a bite.

This is very much a case of ‘don’t say I didn’t warn you!’

Does blowing in a dog’s ears hurt them?

Blowing in dog’s ears won’t hurt them, providing it’s just your own breath, and not using something mechanical. It is unlikely to be painful, but they might find it unpleasant and annoying.

It has a huge impact on their sense of hearing, balances, and overall sensory awareness.

According to Starkey.com, doggy hearing is so much better than ours.

“Dogs hear nearly twice as many frequencies as humans. They can also hear sounds four times further away — so what human ears can hear from 20 feet away; our dogs can hear from 80 feet away.”

So, when you blow into their ears, they suddenly get an intense blast of sound, which might be pretty overpowering and could lead to panic and a bite back at you!

Then, if you’ve ever had a puff of air go into your ear quickly, you’ll know that it causes you to pull away. While it didn’t hurt, it was an unpleasant surprise.

For our dogs who may be caught by surprise when you blow in their ears or not, it’s no wonder they may tell you in some very strong terms that they really don’t like it!

Why do dogs like sticking their heads out of car windows then?

Now you understand why dogs hate their ears being blown on, you likely thinking what the deal is with dogs sticking their heads out of car windows. Surely, they would hate that even more right?

Dogs like sticking their head out of car window as it’s a different sensation. It’s not unexpected, is something that have control over, and is a constant stream of air with millions of different interesting scents coming at them.

In simple terms, it’s a smell utopia, or nirvana, that dogs can’t get enough of!

The bottom line is this; if your dog doesn’t like something then don’t do it. To take amusement from your pet’s insecurity and panic isn’t something any dog owner should do, so stop blowing in your dog’s ears!

If you want to interact with and understand your dog better, then you will like the following related guides.