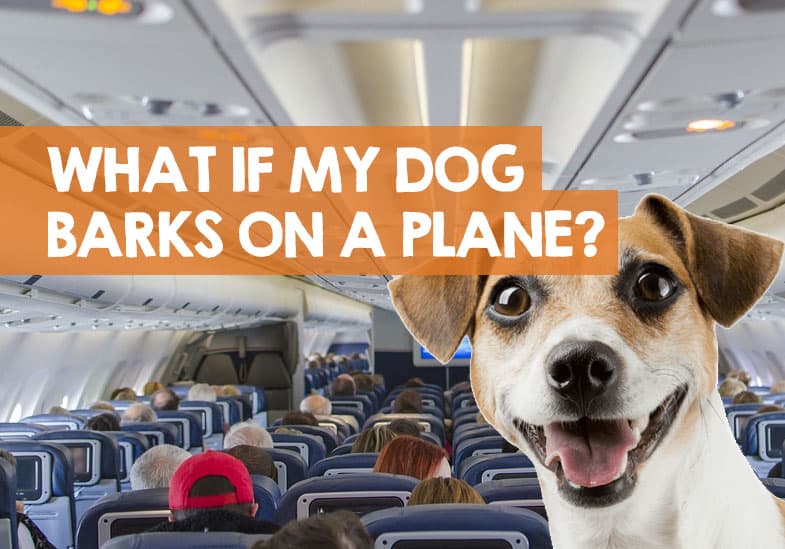 Flying with a dog can be a stressful experience for both you and your pet. It can also be stressful for other airline passengers who probably aren’t expecting a dog to be barking whilst they fly at 30,000 feet.

For owners travelling with their pooch, the fear of what will happen if their dog barks on a plane is a very real one and will result in a lot anxiety both before and after the flight.

Whilst I’ve not had my dog barking on plane before, I have seen it happen twice on domestic flights. Here’s what happened.

What happens if my dog barks on a plane?

On both occasions I heard a dog barking on a plane it caused quite a commotion, mainly because the majority of passengers didn’t realize there was a dog on the flight and were not expecting to hear barking. Well, you wouldn’t, would you?

Once the realization dawned on them that there was a noisy dog on board, most passengers actually laughed it off. But there were some who took exception to the fact, particular those who were trying to relax or sleep.

What happens is, ff the dog keeps barking on the plane for more than a few seconds, expect flight attendants to come over to your seat and ask you if there’s anything they can do to help.

You and I both know there’s nothing the flight attendants can do in reality, other than possibly give you permission to take the dog out of the carrier. I don’t advise that though, as the sights and sounds of a passenger plane could further aggravate the dog’s barking.

You’re at 30,000 feet, you can’t get off the plane, and the airline cannot access the hold to put your dog down there.

This means you are stuck with a barking dog on the flight, so need to revert to your base instincts and training to try and get the pup calmed down.

Here are some options for what you can do to keep your dog from barking on plane, and prevent it from happening in the first place.

Did You Know? It’s possible that dogs can get a sore throat if they bark too much. Find out how to diagnose this and what to do if your dog gets hoarse from barking.

How do I stop my dog barking when flying?

The problem with flying is that your dog is going to be confined to a pet carrier, possibly under a seat or between your legs. That means that when the barking starts, you cannot use the type of tactics you might normally use when outside or in your house.

Before you even think about how to stop your dog barking on plane, think about what the root causes could be, and whether those can be eliminated.

Now, unfortunately you cannot eliminate all of these factors, but you can control some. Based on that, here are some tips on what to do if dog barks on plane.

1. Train your dog to get used to the carrier before the flight

Commercial flights will insist your travels in a secure carrier. Regardless of whether you are flying a full-grown adult Mastiff or a juvenile Yorkshire Terrier, it will do no one any good if you try to cram your dog into a pet carrier that they have never seen before.

With some training at home, you would hope that eventually they are willing to go into the pet carrier on their own volition and you can zip them up and have them in there for longer and longer periods without barking.

If you don’t yet have a carrier, you can buy airline approved ones on Amazon. You can see what they look like in the photo below.

Touch sure you have lots of home comforts in the carrier such as a small and familiar chew toys, something that smells of home, and a comfortable blanket.

A pheromone collar or pheromone spray is supposed to help calm down dogs on flights, but to be honest, I’ve never used them so cannot say for sure. Chances are though, it might calm your dog enough to make them not bark once the flight starts. You can buy one on Amazon.

Something that has great reviews as working to calm a dog, would be a Thundershirt, also known as an anxiety wrap. They are said to work with 80% of dogs who are anxious, and you can read the reviews on Amazon, or click the image below for prices.

3. Consider sedatives after consultation with a vet

If your dog is asleep or very relaxed, they won’t be barking on the plane. One way you could do that is by using prescribed sedatives.

However, the American Veterinary Medical Association does not advise giving dogs sedatives on planes if you can avoid. There are risks of it having unpredictable side effects at high altitudes, including possible respiratory and cardiovascular problems.

It can also affect your dog’s balance making them more disoriented and unable to brace themselves in turbulence, meaning risk of injury is increased.

Sedatives can also lead to a loss of bladder control.

Put these factors together and medication is not going to help your dog remain calm on a plane. It could do the exact opposite.

However, if you do have a dog with a history of motion sickness, possible mild sedation is an option, but talk with your vet first, and try a test dose before a flight.

Instead of sedation, your vet might recommend an anti-anxiety medication. Most dogs do not need these, but it can be nice to have it on hand just in case you notice your dog freaking out and starting to bark once you board the plane.

According to websites I have read, low doses of gabapentin, alprazolam, or trazodone are sometimes used for barking dogs during a flight, providing it’s been prescribed, and you’ve got guidance from a vet.

4. Tire your dog out before the flight

A more natural way would be to tire them out completely so that they hopefully sleep on the flight and don’t have the energy to bark.

Do as much exercise as you can to make sure your pup is exhausted before take-off. That means lots or runs and walks, plus mental stimulation too where possible.

5. Try to book a window seat

Flying with a dog is not too dissimilar to air travel with a kid, you need to think about exactly where in the cabin that you sit to get the best results. Often, you are given the middle seat, but I recommend a window seat if you can as this offers fewer disturbances.

A lot of airlines will only allow a set number of dogs per flight, so you want to be sure that you have priority and choose your seat wisely.

The bottom line is, you want to make sure your dog doesn’t see or hear anything that could make him bark, and chances are those risks are reduced the further away from the gangway you are.

6. Don’t remove your dog from carrier during the flight

You aren’t really allowed to take your dog out of the carrier during a commercial flight, and actually, this rules probably helps to keep them calm and will stop them barking as much.

My view is, if you want to stop your dog barking on the plane, leave them in the carrier. If you take them out, it exposes them to all the craziness of different faces, cabin crew, and such like, and could provoke an anxious reaction and barking.

7. Use a calming low voice and place your hand into the carrier

Instead you can help to stop your dog barking by putting your head down towards the carrier and using a calm and soft voice to reassure them everything will be ok.

Using a calm voice is essential during noisy times, such as take-off and landings, or when the cabin crew bring the refreshments cart down the aisle.

Place your hand into the carrier too, as your touch and strokes will calm your dog down, especially if you have a doggy treat to placate them with. If they have a snack in their mouth, they can’t bark.

8. If you’re relaxed, your dog will be calmer during a flight

If you are calm, then your dog will likely be calmer on the plane. Dogs will pick up on your anxiety, as they are experts at reading body language and picking up on visual and verbal signals.

How to deal with the embarrassment

If all else fails, you’re just going to have to put up with it.

The worst thing that can happen is you might get a few choice comments and looks from other passengers.

If it’s the embarrassment that you’re anxious about, read these tips on how to deal with that on the Huff Post.

There are lots of different opinions on whether dogs should even be allowed in the cabin during flights. Many passengers who don’t own dogs will be mainly fine with a service dog but can take exceptions to barking and yapping dogs that could be placed in the hold.

Ultimately you cannot predict whether your dog will start barking on the plane of not. All you can do is prepare for it to happen and have a plan in place.

I hope my tips have helped.

I’ve written other guides relating to airplane travel with dogs which supplement this information very well. You can read some of those below.