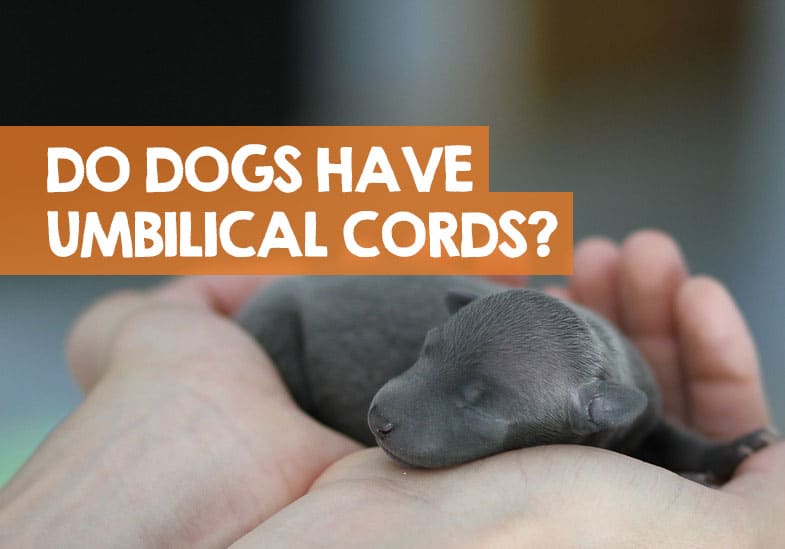 The other day I was giving my dog a belly rub. He was rolling on his back and loving it, but the moment was briefly interrupted when I saw an extra nipple in a strange place (on the dog, not me). It turned out that what I thought was a nipple, was in fact my dog’s belly button. Panic over.

And that segues almost seamlessly into the question of the day on Doggysaurus; do dogs have umbilical cords?

Do dogs have umbilical cords when they are born?

Yes, I know this question has been burning into your conscious mind for years, so let me relieve you of the agony as I explain all there is to know about dog umbilical cords, where they are located, what they do, and even what you might need to do if your dog has puppies.

And by the way… here’s that video of me giving my dog belly rubs the day I discovered the belly button scar from his umbilical cord.

What do dog umbilical cords do?

Just like humans, dogs are placental mammals. A placental mammal is an animal that is one that develops inside of the mother, feeding and receiving oxygen via a specialized embryonic organ (the umbilical cord) which is attached to the mother’s placenta (read full definition).

Placental mammals are ones that are given birth to live, rather than being hatched from an egg or inside of a pouch. Examples of placental mammals aside from dogs include us humans, but also animals as diverse as elephants, whales, and mice.

After the mammal has been born, the mother will either chew through the umbilical cord leaving a small piece that will heal and wither away, or it will cut and then tied with human assistance. Placental mammals including humans and dogs are then left with a little scar where the umbilical cord was attached. This is commonly called the belly button.

Where does a dog’s umbilical cord connect?

Where is your dog’s belly button?

The dog’s umbilical cord will connect centrally in the middle of the puppy’s abdomen, just below where you can feel the ribs. This is where your dog’s belly button is located once it has healed after being cut or bitten through.

My dog’s belly button is one of the oval types, which is why I initially mistook it for an extra nipple. It had similar coloring, shape, and size as you can see in the photo.

Do you have to cut a dog’s umbilical cord?

This is usually the key for the mother to bite and break off the umbilical cord. In most cases nature will take its course, with first time mothers knowing exactly what to do.

When this doesn’t happen, breeders or vets will cut the umbilical cord around a couple of inches or so from the puppy’s belly. What’s left of the umbilical cord will eventually shrivel up and drop off after 24 to 72 hours, leaving a belly button scar in its place.

How do you cut a dog’s umbilical cord?

I am not going to pretend that I have ever had to cut a dog’s umbilical cord so instead I suggest you head on over to the Cesar’s Way website which contains a guide to delivering puppies. This is how the explain it:

“If the momma pup doesn’t chew through each umbilical cord on her own, you will have to cut the cord. If you do, be sure to use sterilized scissors, cut about an inch from the pup’s belly, and tie the cord off with the thread or dental floss ¼ to ½ inch from the puppy’s body. When cutting, it’s better to crush the cord rather than make a clean cut; this will reduce bleeding. After you’ve tied it off, dip the end in a shallow dish with either iodine or antiseptic solution.”

Do dogs eat the umbilical cord?

Another common question asked on this topic is whether the mother dogs eats the umbilical cords of the puppies. Whilst it might sound quite disgusting to us, it’s perfectly normal mammal behavior that has been observed for thousands of years.

The reasons why dogs eat the umbilical cord and placenta isn’t know exactly, but there are 4 theories which I’ve listed below (found on WoofDog.org if you want more information).

The Woof Dog website go on to get the opinion from experts on whether mother dogs should be allowed to eat the placenta and umbilical cord, saying:

“Dr Root Kustritz claims that there is no good physiological reason to allow your dog to eat the puppy’s placenta. Veterinarian Dr Beaver holds the same opinion and adds that, while it would have served a purpose for wild canids, it is not necessary in domesticated dogs, who have no need to hunt or protect themselves from predators.”

The next time you give your dog a belly rug and happen upon the belly button, you should be confident in knowing the reasons why dogs have umbilical cords and how they ended up with that particular little spot on their body.

I love finding out new things about my dog. If you’re the same, you might also enjoy these other pieces of research I’ve curated and published on Doggysaurus this year that are loosely related to whether dogs have umbilical cords when they are born.