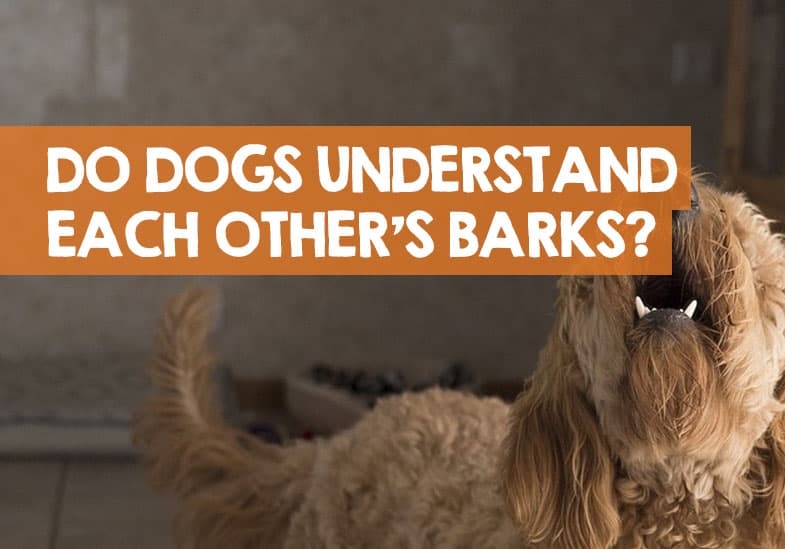 Dogs make all sorts of sounds, barking being what we hear most of the time. When they aren’t barking at humans, they’re barking at their dog friends. Are you curious to know whether our dogs understand each other’s barks?

Yes, it’s believed that dogs do understand each other’s barks. Dogs mostly rely on barking to communicate with their fellow canines. A dog’s bark or “woofs” reveal their emotional state, and other dogs can sense this state based on the bark’s pitch, duration and frequency. Plus, the body language displayed by the barking dog matters too.

Below I’ve broken down various reasons why dogs bark at each other in the first place. You’ll also discover more interesting info on how your dog understands other dogs’ barks.

How dogs understand each other’s barks

Dogs start barking as puppies, sometimes as young as 7 weeks of age. If you own a dog, you will know that they can decide to bark anywhere, anytime. Whenever they feel like it, and sometimes for what appears like no reason.

They don’t care whether their barking irritates you or turns your peaceful home into the “chaos headquarters”.

They’ll bark. Unapologetically. It could even end up with the law being broken if they don’t stop barking.

That’s because dogs resort to barking when they need to communicate. It’s their way of speaking their minds, but not just to people but to other dogs.

Since they can’t express themselves verbally, barking is what they do instead.

When dogs decide to communicate with one another through barking, it might be because of one of the followingreasons.

Clearly, a dog’s bark serves various purposes, and our furry friends express their emotional state by barking. Since they are capable of experiencing emotions like loneliness, fear, anger, happiness, and suspicion, they’ll vocalize these emotions.

Well, there’s some truth to this. Dog-to-dog barking is the official canine communication language, so it’s no surprise that a dog can hear and understand what another dog’s bark means.

But research has more fascinating findings.

Dogs can correctly understand another dog’s bark because of how the barking occurs. In other words, when a pooch is barking, there are three factors involved:

Now, when a dog barks, another dog can pick on the pitch, duration, and frequency to figure out what the barking dog wants.

And during a face-to-face encounter, the non-barking dog will know what the barking dog wants through their body language and respond accordingly.

The “I’m excited to see you, let me say hi” bark

Our canine friends know each other. Thanks to their incredible sense of smell, your pooch can recognize the dog they hanged out with at the park several weeks ago.

So, if you’re taking your furry pal for a walk and they spot a familiar canine, they’ll bark to send their greetings. The other dog will respond to the greeting with a bark.

This “excitement bark” usually involves longer high-pitched barks and lots of positive body language — for instance, getting closer and sniffing one another as tails wag high in their air.

Handy Hint: Dogs can also understand commands from their human, including finger pointing!

The “I want to play with you” bark

A dog interested in playing with another pooch will make multiple high-pitched barks while showing certain body language cues indicating their anticipation for game time. This can include rolling in dirt while pawing at the air, or lifting their backside with elbows on the ground.

The “you’re frustrating me, back off!” bark

If a dog is angry at another dog, probably because they’re attempting to step into their territory, they’ll make long, low-pitched barks coupled with growling sounds and teeth flashes.

The barking may also be accompanied by forward weight (their body posture seems like they are slightly leaning closer to the “annoying” dog).

The “let’s have a canine meet-up” bark

When dogs want to assemble, the barking prolongs until every canine member of the pack shows up.

And, in this case, it happens in turns. One dog may start barking (and interchanging with howling) in high-pitched tones. Another dog understand what the bark means, joins in, then another, and so on.

It ends up being a group barking session that ceases once they all meet.

When a dog senses danger and wants to warn the rest, their barking will be high-pitched and fast-paced (without short pauses in between). Dogs will do this bark for hours, and will seemingly never get tired of doing it.

Loud and fast-paced barking lets other dogs know that whatever the barking canine is trying to communicate is urgent.

Plus, the “warning alert” bark often sounds hysterical. You can easily conclude the dog issuing the warning is in complete panic mode.

The “ouch! you’ve hurt me” bark

Dogs make this type of bark when playing together.

If two dogs are having a terrific playtime, and one suddenly gets hurt by the other (for example, they get bitten), the injured dog will bark out of the blues as though making a high-pitched yelp.

The barking may involve a few spaced-out barks with a harsher tone. The guilty dog will get a hint of what they’ve done.

Plus, the injured dog will give clear body language, suggesting they don’t want to play anymore. For instance, opting to sit upright (if they were playing while wrestling on the ground)

A dog in deep pain (probably after an attack by another animal) will make barking noises for a long duration until they get a sore throat from barking too much.

And more often than not, the barking is paired with distressing sounds like whimpering, whining, or snarling.

When other dogs hear the prolonged excessive barking involving a variety of upsetting sounds, they’ll have an idea that one of their own is terribly hurt.

The “I’m super bored and need some company” bark

When bored, a dog will make two or three high-pitched barks at a go then pause for a while before proceeding with the short burst of barks, like this dog here.

A pooch barking out of boredom in the backyard can win the attention of the other dog next door, who’ll likely respond with barking.

Whilst we’ve established that dogs do understand each other’s barks, it is at a very basic level and should not be interpretated as thinking dogs have huge vocabularies.

Dogs can’t understand each other like humans do, as their barking is not a conversation as such. More it’s like some very basic commands and sounds.

Do dogs understand each other through barking?

Yes, that’s right. Dogs understand each other when they bark because they can interpret the meaning behind the duration, frequency, and pitch of another dog’s bark.

And when the barking happens during a face-to-face encounter, it’s often accompanied by body language that dogs can understand.

Do dogs understand other dogs?

Yes, you got that correct. Dogs understand other dogs through barking since that’s how they communicate best.

Do dogs communicate with each other?

Yes, you’re right. Even though they can’t use words, dogs do talk and understand one another through barking, howling, and body language.

Do dogs know what barks mean?

Yes, that’s correct. Dogs bark for different purposes. Their barking often has a particular pitch, duration, and level of frequency depending on what they’re trying to communicate.

Dogs can interpret these three and know the meaning behind another canine’s bark.

Dogs do understand other dog’s barking at a very basic level, but should not be viewed as being at a conversational level. Dogs will never learn to talk, despite what some people say!