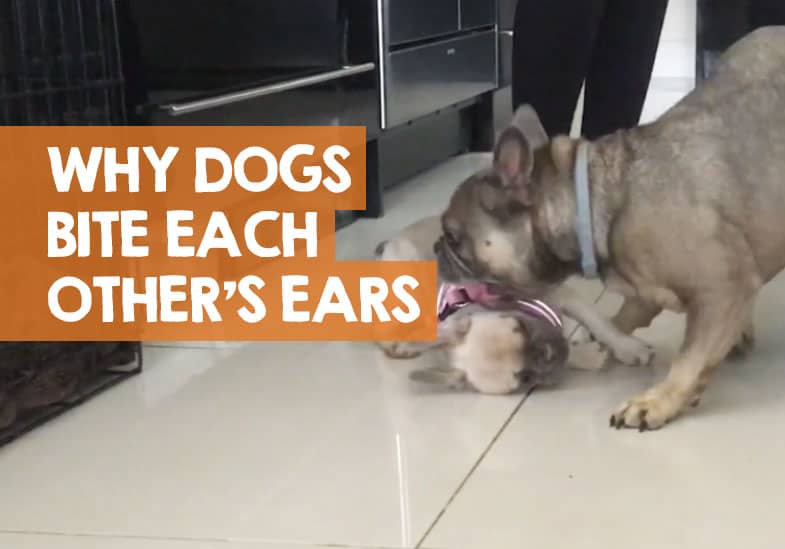 Have you ever noticed how two playful dogs will mouth and bite at each other’s ears? It’s really interesting to watch, and there must be some meaning behind it.

I see it a lot when we have our friend’s puppy come stay with us. She loves to play with our adult Frenchie, Claude. The two of them really go at each other until they are completely worn out, with the main focus of their play attacks, being to bite and chewing on each other’s ears.

But why exactly do dogs bite ears, and should you be worried about the chewing, and is there a time to stop the behavior? I decided to find out, so researched as much as I could on vet websites and talking to our own vet.

Why do dogs bite other dog’s ears?

So, what does it mean when a dog chews on other dog’s ears? Well, from what I can gather it’s important to make the distinction between play and aggression, as ear biting can quickly escalate.

In most cases, I’d like to think you will see a dog biting another dog’s ear with just little pressure. This is the classic “mouthing” play where one dog attempts to exert dominance over another.

When you see your dog biting other dog’s ear in play, that’s just what it is playful. Dogs learn from a young age how much pressure they can apply when biting, and are attracted to the ears because:

But, even in play, one or both dogs can become overzealous and bite too hard. It not uncommon for even play ear biting to result in injuries, so keep a close eye on how the play fighting is developing.

The thing with ear injuries is that they can look a lot worse than they actually ear. Just a small nip or cut can result in a lot of blood, which can get sprayed when the dog shakes their head.

It’s the stuff of nightmares, but often you will look and just see a small cut and wonder where all the blood came from. The reason ears tend to bleed heavily is because they are in a constant state of movement, making clotting take longer, which aids wound healing.

The bottom line is that if your dog bites another dog’s ear and there’s no blood, snarling, or yelps of pain, then it’s most likely a mutually beneficial relationship between the two; focussed on fun.

Whilst it looks rough and even painful, it’s perfectly normal dog bonding, sometimes even started up by one dog to bait the other into playing with them.

You know your dogs want to play with each other if they:

If you are worried that one dog is biting the other dog’s ears too much, and think it’s not play, then there’s a quick trick you can use.

All you do is restrain the dominant dog doing the majority of the ear biting. If the victim of the ear biting approaches the restrained dog, then it’s game on, and you probably have nothing to worry about – it’s just play.

Handy Hint: Talking of biting, here’s why dogs and puppies like to nip at your ankles when you walk past them.

This is when things go off the scale, and it can result in serious injuries. Dogs have varying degrees of bite force pressure, and those teeth can tear at thin ear skin creating very nasty injuries when things go too far.

Handy Hint: I’ve researched into the bite force pressure of Chihuahuas and American Bulldogs. Which do you think has the harder bite?

Dogs will bite and chew at ears in serious fights, because ears are easily accessible, and it’s a case of ratcheting up the dominance they often display when playing.

Aggression and ear biting could be a result of:

If you see these signs of aggression and blood is evident on the ears, then you should look to separate both dogs immediately and work on correcting the behavior.

Handy Hint: Dogs will bite at each other’s necks as well for similar reasons as I describe in this helpful guide.

How do I stop my dog from biting my other dog’s ear?

Most doggy ear biting will be related to play, but there will be times when you need to put a stop to it before it escalates into something more serious.

Here are some tips on how you can get your dog to stop biting another dog’s ears, with inspiration from the excellent PetSit.com website.

The best route to stopping dogs from biting each other’s ears is to distract them with a loud noise. This might be you clapping your hands or making a loud noise, but it works best if it’s a sound the dog isn’t used to hearing in everyday activities.

Some people carry a whistle, others might sound a car horn – providing they can act quickly enough.

Don’t shout or yell, as this can inflame the behavior and ramp the aggression up a notch.

This needs two people to work properly and involves you both grabbing the back legs of each dog, and lifting the legs clear off the ground.

By doing so, the dogs will be forced to balance onto their front legs which completely limits their movement and ability to fight until they can be calmed down.

You can learn more about this technique my extensive guide to breaking up dog fights.

3. Place a barrier between them

Whilst this isn’t always possible, it can work if you’re in an indoor environment, where chairs and tables can be utilized as barriers between two aggressive dogs.

I’ve seen this done in an outdoor environment, where the dog owner used a large broom to separate dogs that had escalated from ear biting each other, to a full-blown battle.

Some dog trainers recommend throwing a blanket over the dogs can also work very well.

4. Spray the dogs with water

If you have a spray bottle to hand, then it can work wonders. Dog trainers say that vinegar or citronella can break up a fight, but for the best results a good old-fashioned garden hose works wonders.

Things you should never do when splitting up fighting dogs

You should never attempt the following, as you could be seriously injured:

Why dogs chew each other’s ears can usually be explained away as just play. It very rarely escalates into anything more serious.

Most dogs will try and bite ears when playing, and it’s usually a mouthing action or harmless little nips. It’s ingrained behavior that starts when they are puppies in the litter when they test the boundaries of what they can get away with and what’s acceptable.