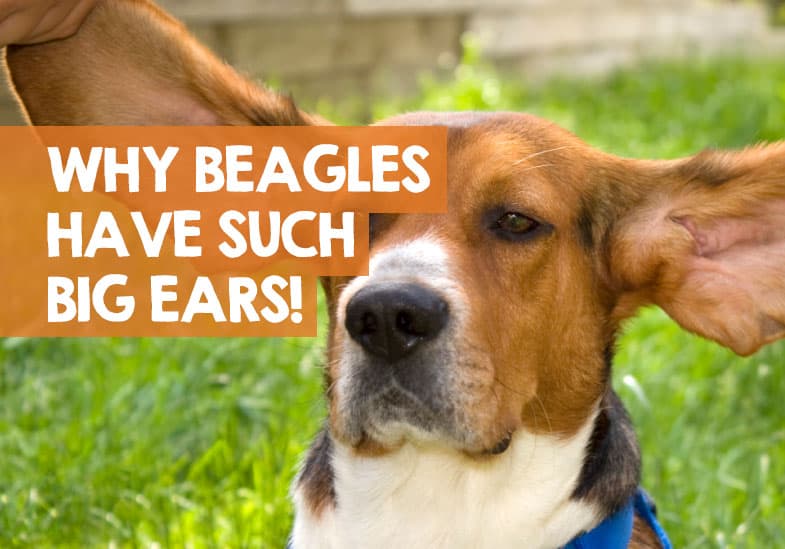 Beagle owners love to play with their dog’s long floppy ears, and who can blame them? Just like Snoopy (who was a Beagle), their big ears are what truly sets them apart from so many other breeds.

Combine their floppy ears with their beautiful eyes, and it’s easy to see why Beagles are so popular… but did you know that there’s actually a scientific reason for why Beagles have large floppy ears?

Those long, soft ears that hang low from your Beagle’s head may look cute, but that have very good reason for being so big.

Why do Beagles have big ears? Beagles have big, long, floppy ears to help them track smells better. Their long ears sweep through the air close to the ground and stir up invisible scent molecules, wafting them up towards their nose. Bred as hunting dogs, their big ears aid them in their tracking skills.

Why do Beagles have long ears?

That’s the short answer, but I wanted to get a little more in depth about how their big ears aid them in the scent detection and tracking.

If you look closely at a Beagle, you will notice how their big long ears are actually set a little bit lower than most dogs too. This lets them hang even lower than they would normally, and even look longer than they are.

That means when your Beagle gets a sniff of something interesting, his head gets close to the ground, and those amazing floppy ears can get to work.

I’ve someone compare them to catcher’s mitts, and I think this is a great analogy; they sweep along the floor kicking up invisible smell particles, and sweep them towards their nose – and Beagle’s have an incredible sense of smell that is far better than most other dog breeds… those ears help them out a lot!

You would think that having long ears that drag close to the ground would actually impair a Beagle’s hearing… but it’s the complete opposite.

As well as kicking up all those interested smells, a Beagle’s long ears also reduce the far off sounds interfering with their hunting – meaning they learn to rely a lot more on their excellent sense of smell.

Did You Know? Beagles are used as drug sniffer dogs by the police and airports due to their amazing sense of smell?

Do Beagles have good hearing? Yes, Beagles do have good hearing. However, many owner’s express frustration with how the Beagle tends to have selective hearing! It’s also worth noting, that their long droopy ears, can reduce sound that travels over a distance.

But, they more than make up for this with their amazing sense of smell. It’s far better than almost every other dog on the planet, bar the other hound and hunting dogs such as bloodhounds.

And it’s not just the big ears that help a Beagle’s scent tracking. Their lips also play a part, as they are large too, and also stir up scent particles up to their nose.

Do beagles have ear problems?

Whist we’ve established that those long big Beagle ears can give them a huge advantage when it comes to their smelling talents, they can also come with some negatives.

Because their ears are so long and floppy, it means that clean air flow cannot get into their inner ear as well as it should. Their big ears can also mean moisture gets trapped inside.

Basically, bacteria and dirt can get trapped in those floppy ears, which then can get all warm, making a breeding ground for nasty stuff.

And this is what leads to Beagles having frequent ear infections if you don’t clean them properly and regularly. You need to keep your Beagle’s long ears dry!

Lastly, because they have long ears, they can also caught-up in things. As funny as that might sound, it can actually be quite an issue.

A friend of mine owns two Beagles. One of them had a particularly nasty tear that required stitches after getting an ear caught on a fence in the local forest.

Did You Know? Beagles actually have webbed feet! Find out why they have ended up with this evolutionary trait in this guide to webbed paws.

With an estimated 20% of all Beagles suffering with an ear infection at some time in their life (being more common due to their floppy ears), here’s what you need to look out for.

If you see anything like this, please consult with your vet.

Why does my Beagle have small ears?

But what about if your Beagle has the complete opposite, and doesn’t have long floppy ears, but small ones instead?

It could be that you don’t have a purebred Beagle, but it really depends on how small your Beagle’s ears are.

For example, there are subtle differences in ear shape and length between the American Beagle and English Beagle:

The American Kennel Club (view website) sets the standards for what a pedigree Beagle should be, with their ears being of particular importance. Here’s what they say:

“Ears set on moderately low, long, reaching when drawn out nearly, if not quite, to the end of the nose.”

If your Beagle does have smaller than average ears, they either aren’t purebred or could be the result of poor breeding conditions.

Why do Beagles have ear flaps?

Dog ear flaps are those little pockets near the base of the ear, also known as “Henry’s pocket. The medical name for these pockets or flaps is a cutaneous marginal pouch.

The reason Beagles have ear flaps for three reasons:

Handy Hint: If you’ve noticed your Beagle has red eyes then it could be down to a range of issues. Find out when you might need to talk with a vet here.

Big Beagle ears are fun to play with!

Part of the appeal of Beagle’s are their long floppy ears. Owners love to stroke them; they are silky soft, foldable, and just plain hilarious.

Whilst Beagles might be one of the smallest of the hound breeds, they have been bred to be amazing trackers and hunters… and those large droopy ears are an excellent advantage.

All of the famous characteristics of a Beagle are designed to help them with scent detection. The long nose and neck, the big ears, and wagging tail.

This desire to find and track after interesting smells makes them great hunting companions, but it can lead to problems in the home! Beagles will always be distracted by smells in your house, and that can make training them or keeping them under control quite tricky… in fact, Beagles can take a long time to calm down after puppyhood!

However, they more than make up for their stubbornness with their loveable nature. Here’s some more about this amazing breed aside from why their ears are so big and floppy.