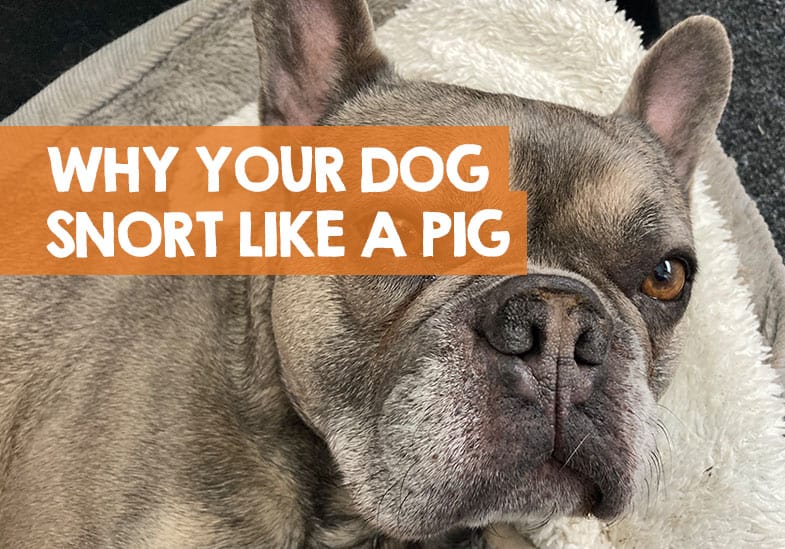 We own a French Bulldog. He snorts like a pig all the time, and it’s not that unusual for this breed, being brachycephalic. But even non-brachycephalic dogs will snort like a pig when playing, excited, sleeping, or just occasionally. There are some very good reasons why, which I will explain below – here’s the quick answer first.

Why does my dog snort like a pig? Sometimes dogs will snort like a pig if they are a breed with shorter airways and they are lying in a particular position. Other times it might be due to an irritant in their throat, over-excitement, or what is known as a reverse sneeze.

Reverse sneezing is more like a pronounced honking, and can occur for many different reasons, but it is rarely a concern as it will pass after a few seconds.

The bottom line is this; many dogs will snort like a pig when excited or playing, and it’s nothing to be worried about.

However, if it’s a constant snorting and more regular than what is considered normal, please tell a vet.

The most serious (whilst rare) reason for a dog to be snorting like a pig could be a collapsed trachea, more often seen in small dogs. If you suspect this to be the case, your dog needs to be seen by their vet right away – if the snorting is constant, please do seek professional advice.

But, with that being said, here’s more about the pig-like snorting, what it means, and when to be concerned.

Why your dog is snorting like a pig sometimes

As an obsessive animal lover, tend to find all the noises that my dog makes adorable. I usually don’t stop to think about what the noises mean. However, we were recently on a walk with my mom, who doesn’t own dogs.

My dog stopped to play in a patch of grass and soon started making the familiar pig snorting noises. My mom pointed it out and said that it might be an indication of a health problem.

My gut feeling was that it wasn’t as my dog often snorts like a pig when playing and hunting for interesting smell. However, I did think it was worth looking into, as I know not everyone will have that level of peace of mind.

Reverse sneezing can be a scary sound if you have never heard your pet do it before. It can occur in all breeds of dogs, and even in cats; although much less frequently.

Reverse sneezing is an irritation of the soft palate. This includes the area at the back of the dog’s mouth that controls different functions such as voice, breathing, and swallowing.

When the muscles in the soft palate are irritated, they will spasm and cause the trachea to narrow. When the trachea is narrowed, the dog will not be able to take a regular breath of fresh air. This is when the dog will inhale through its nose, resulting in a reverse sneeze.

Why does it occur?

Usually, reverse sneezing occurs because the dog’s nasal or sinus passages have gotten irritated by a foreign body. The dog could be attempting to remove dust, dirt, or powder from its airways.

This, as it happened with my dog, tends to be the case when they are outside playing in the grass or dirt. It can also happen inside the house if they knock over and sniff a jar of flour or other such materials.

The pig snorting noise can also occur when the dog is over-excited. They might have been playing too aggressively for too long, and have trouble regaining control of their breathing. Other dogs will experience it if they are running or pulling on their leash.

This causes the same result; reverse sneezing as the dog struggles to resume their normal breathing pattern.

As mentioned above, no breed of dog is immune from snorting noises, or reverse sneezing. You may have noticed that certain types of dogs will experience this more, which is true.

Certain dogs have short noses and flat faces, which means that their throats and nose structures are smaller. They are more susceptible to snorting noises, as they can happen easier and quicker.

These types of dogs include Pugs, Shih-Tzus, and Cavalier King Charles Spaniels are known as brachycephalic breeds like my French Bulldog.

Smaller dogs will experience snorting more frequently, even if they do not have the same facial characteristics. For example, Beagles and Yorkies will reverse sneeze due to their small body size.

When to be concerned?

It can be hard to tell if a new behavior or sound is a cause for concern or not. Reverse sneezing should clear itself up in less than a minute. It should only take a few seconds for the foreign body to be expelled from the dog’s nose.

If the sneezing takes far longer than this to clear up, or if it is happening more often than usual, you may want to bring your dog to the vet. Also, if it occurs when the dog is simply lying down or walking normally, this is a sign that something could be wrong.

The vet will need to know all the details, such as how long the reverse sneezing goes on, what the dog is doing at the time and any other signs that you have noticed.

How can I help my dog?

As a pet owner, it makes sense that you will want to alleviate your dog’s discomfort. There are a couple of things that you can try if you notice a reverse sneezing attack.

The far more serious answer as to why a dog is snorting is due to a collapsed trachea – it is rare but needs mentioning. This is due to damage to the windpipe and could potentially be fatal if it is left unaddressed for too long.

The windpipe is how air is transported to the dog’s lungs. It consists of muscle and cartilage rings that are c-shaped. When the rings collapse, this is what causes the condition. A trachea could partially or completely collapse, depending on the situation.

It may happen from them pulling too hard on a leash, or simply because the rings are genetically weak.

If the dog is snorting like a pig for no apparent reason, that is one of the most noticeable signs of a collapsed trachea. You may also notice a honking, loud cough that will not go away.

This is due to the airway being blocked, as it is difficult for air to travel through. The dog will also have a noticeably declined interest in things such as exercising or playing. They may also have labored breathing during non-strenuous activities.

Handy Hint: I have previously written about what it means when a dog gurgles in his sleep.

This is a progressive condition that will continue to get worse without proper treatment. The vet will do a thorough examination of your dog and listen to the symptoms that you have picked up on. They will also weigh the dog, as it is more likely to happen with pets that are overweight.

The vet may prescribe antibodies, cough suppressants, or steroids. The first goal is to alleviate the coughing, as that will only increase the irritation and worsen the condition.

Next, the vet will recommend some changes that you will need to put into effect. This could include:

A collapsed trachea sounds scary, but do not panic if that is what your dog is diagnosed with. Some breeds are simply more prone to the condition, and there is nothing you can do about that.

By working alongside the vet, you will be able to manage the condition and help your dog get back to its everyday life.

Dogs snort like pigs… particular when excited or sniffing around outside. In exceptional circumstances though, it can be something serious so always consult with a vet if you are even the least nit not sure.