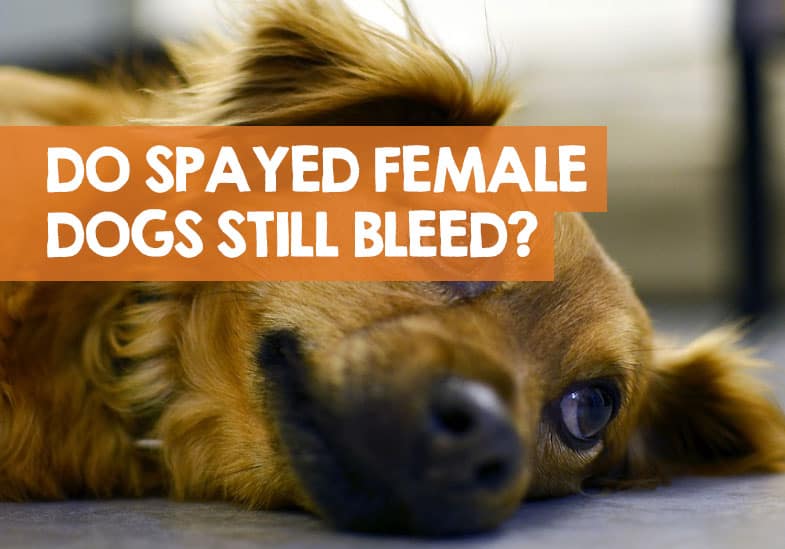 Spaying your female dog can result in many health and behavioral benefits. It also has the obvious advantage of no unwanted pregnancies or unwanted attention from local male dogs. In theory, spayed female dogs should no longer have their periods either. But just how true is this though; do spayed dogs still bleed?

In this short guide, I will explain all I’ve learned about whether female dogs have discharge bleeding after being spayed, and what you can expect.

Is it normal for a dog to bleed after being spayed?

To answer this question properly, we need to consider two possibilities. Firstly, yes, it is normal for dogs to bleed a little after being spayed. Many dog owners will see small amounts of blood from the dog, sometimes in the urine, which could be bleeding left over from the operation.

If you do see a small amount of bleeding from the wound after your dog has been spayed, you should consult with your vet and get it checked out. If your dog still bleeds after being spayed, it could potentially relate to a post-operative problem or internal bleeding around the wound.

Many dogs will remain active after their operation. It’s this running around and jumping can cause a bleed which is why vets are so adamant your dog should rest.

There’s also a possibility that a spayed female dog can still has a period and heat after the operation. As unlikely as this sounds, it can happen, and I will explain why in the next section.

Why female dogs still bleed after being spayed due to heat

In the majority of cases, once a female dog is spayed, she will no longer go into her heat cycle. As she is no longer going into heat, her body will no longer have the hormonal changes that result in periods and bleeding.

The spay procedure involves removing the ovaries and uterus of the dog, therefore removes the bodily function that produces bleeding cycles.

Most female dogs will never bleed again once they have been spayed. However, there are very rare cases when the surgery won’t be a 100% success.

In cases like this there can be remnants of ovarian tissue left inside the dog after the operation. It’s called ovarian remnant syndrome and means you might still see signs of heat in your spayed dog, including bleeding:

“If a previously spayed animal shows signs of going into heat, this may indicate that functioning ovarian tissue is still present and producing estrogen. Ovarian remnants may be left behind during surgery or may be caused by the presence of accessory ovarian tissue (a small piece of tissue that fragmented off the ovary and established enough of a blood supply to begin producing hormones).” (view source)

Given that the most obvious signs of heat in a dog include blood-tinged vaginal discharge, this means in rare cases female dogs can still bleed after being spayed… if they are suffering with ovarian remnant syndrome.

But what are the chances that your spayed female dog will still bleed due to this condition? I decided to see what science says, with my findings below.

How common is bleeding after being spayed?

In 1973, a study found that ovarian remnant syndrome was found in 17% of dogs studied who had undergone spaying. It goes without saying that veterinary surgery will have advanced a lot since the 1970s, so this statistic is bound to have dramatically fallen.

Unfortunately, I was unable to find any recent statistical data on how common ovarian remnant syndrome is, so cannot compare.

Another point to consider also is that even in dogs who have ovarian remnant syndrome, not all of them will bleed after being spayed. Sometimes the blooding can be due to hemorrhaging due to the condition, rather than period blood produced during the heat cycle.

So, the bottom line is, yes, female dogs can still bleed after being spayed, but most of the time it could be due to post-operative bleeding. It could even possibly be ovarian remnant syndrome.

Either way, if you see any bloody discharge after your dog has been spayed, you should immediately call your vet.

The ovarian remnant syndrome can be tested for by taking a swab from the vagina, taking hormone level tests, or by taking an ultrasound to look for tissue remains.

Handy Hint: If your dog has recently been spayed you should not leave them alone for a while. Here are some guidelines on times.

If your dog has been spayed, and you notice what appear to be periods and blood spots, contact your vet. In addition to this concern, there are also some other things to look out for below.

Contrary to popular belief, just because your dog has been spayed, it doesn’t mean that male still won’t be attracted to her.

The main reason this can happen is due to hormones still being produced when some tissue is left over after the spaying surgery. There are 3 other reasons too though, all of which I’ve detailed in my guide to why spayed females still attract male dogs.

The key here is to understand the difference between spaying and neutering. Spaying is the female procedure; neutering is the male procedure. The reason this is important is because neutered dogs, i.e. the males, can still exhibit sexual behavior.

Reasons to spay your female dog

If you’re still on the fence about getting your girl spayed, then I would encourage you to consider the benefits. Aside from her stopping her bleeding and periods during heat, there are also other health and social benefit to be had.

According to the ASPCA website, the benefits of spaying include:

Your dog could lead a longer and healthier life as spaying can help to reduce the cancers, tumors, and uterine infections. The prevention rate has been found to be as high as 50% in female dogs.

The full list of medical benefits that spaying can either stop or help to prevent include:

2. After spaying your dog she will no longer bleed

3. After spaying your dog she may be less aggressive

Your dog will no longer be producing the hormones that make her want to mate. This can mean she no longer acts aggressively to compete for the attention of a male dog. It’s not unusual for spayed dogs to also be more affectionate towards their owners.

If your female used to roam for males before spaying, this behavior should also stop.

4. Spaying is far cheaper than looking after new dogs

The cost of a spay procedure is far cheaper than having puppies to look after and bring up. Some charities also offer free spaying operations if you are struggling to afford the surgery cost.

Spayed dogs still bleed but, in most cases, it should stop a few weeks after the operation, and is likely to be blood spots left over from the surgery. In very rare cases it could be a post-op complication, or periods due to ovarian remnant syndrome.

There are also other reasons why your spayed female has blood spots and discharge including the possibility of a vaginal injury, urinary tract infection, or disease.

As owners we have no way of knowing why our spayed female dogs is still having what appears to be a period and bleeding.

Because of this, the first sign you see any spots of blood with a spayed dog, you should always contact your vet so the most serious possibility can be ruled out.

I regularly blog about the strange things that can happen with dogs, so you might also like the following blog posts: