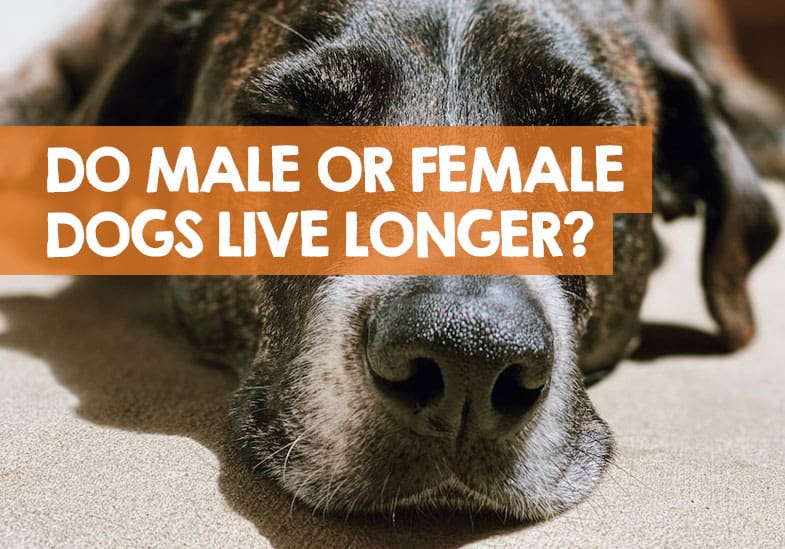 When it comes to our four-legged companions and their lifespans, there are differing opinions on which gender outlives the other. Some say female dogs live longer, others say male dogs have a longer lifespan. But as with so many things relating to dogs, it’s not that cut and dry.

This fact alone is a possible reason to consider having your dog neutered or spayed. Below you can find out more facts about neutering and spaying and their impact on how long female or male dogs live.

We all wish that our treasured dogs could live much longer. Their short lifespans never make sense to us, considering the immeasurable happiness and peace they bring to our lives in this chaotic world.

They deserve more years on earth. If only it were possible for them to grow old at the same pace as us!

There are claims that a dog’s gender can determine how sooner or later you’ll say goodbye to your dog. This can sometimes determine which gender people choose when buying a dog.

The influence of gender on a dog’s life expectancy is a hotly debated topic.

This issue is still under study. So, I can’t say for sure that male dogs outlive the females, or that female dogs have longer life spans than the males.

Even the available research stating a particular sex will live longer isn’t quite clear on what effect gender has on the dog’s longevity.

Let’s just say that scientists are yet to solve the mystery.

Gender doesn’t favor a dog’s life expectancy. At least that’s what I know for now. But something else does – whether a dog is spayed or neutered.

Do female dogs live longer if they are spayed?

This is something I can be sure of according to science, which suggests female dogs live longer if they are spayed.

A study by the University of Georgia research team revealed that spayed or neutered dogs have an average lifespan of roughly 9.4 years. As for dogs that haven’t undergone these procedures, their average lifespan is much shorter 7.9 years.

“Looking at a sample of 40,139 death records from the Veterinary Medical Database from 1984-2004, researchers determined the average age at death for intact dogs — dogs that had not been spayed or neutered — was 7.9 years versus 9.4 years for sterilized dogs.”

This means that if you have a spayed female dog or a neutered male dog, there’s a high chance they’ll live around one and a half years longer than an unspayed or unneutered dog.

Another reliable pet health report had this to say:

These findings are trying to say that whether male or female dogs live longer can only be answered from a spaying or neutering point of view.

That said, let me break it down for you in the simplest terms:

What, exactly, is spaying or neutering

When we talk of a spayed dog, it means she has undergone a medical procedure to have her ovaries and uterus removed. Spaying ensures that a female dog doesn’t reproduce, ever. And that she never experiences the heat cycle.

She won’t have to deal with the hormonal imbalances that unspayed dogs go through during heat – she can still bleed though, contrary to what you might think. She may still attract male dogs too.

Neutering, on the other hand, involves getting rid of a male dog’s testicles. A neutered dog won’t ever produce sperm. This procedure also stops a male dog’s body from releasing sex hormones like testosterone.

And similar to a spayed female dog, a neutered male won’t have the sexual urges to mate.

Experts often say that the best time to spay or neuter your canine pal is when they’re between six and nine months. But with giant dog breeds, experts recommend spaying or neutering them when they are around 12 to 18 months old.

Here’s something we can all agree on: health is the main factor that determines how long a dog live. This is the factor, not whether male dogs live longer than female dogs.

Experts repeatedly urge dog parents to spay or neuter their four-legged friend because of the positive impact of these procedures on a dog’s long-term health. Spaying or neutering comes with health benefits that greatly lower a dog’s risk of premature death.

Let’s see why spayed or neutered dogs have a lifespan advantage:

Our canine pals suffer various types of cancers. Among them, reproductive system cancers.

And as you may probably know, cancer shortens a dog’s life expectancy — by far. One of the best things about spaying or neutering is that your canine friend will no longer be susceptible to cancers of the reproductive organs.

By spaying your dog, her risks of cancers like uterine cancer and mammary cancer (their body won’t produce sexual hormones that trigger mammary gland tumors) will be zero.

Female dogs are also at high risk of a life-threatening infection in the uterus known as Pyometra. This deadly uterine infection is among the leading cause of death in unspayed dogs since they still have their uterus.

So, if you spay your female dog, you can be sure they won’t suffer from or succumb to pyometra.

As for the male dogs, neutering adds more years since their risks of cancers like testicular and prostate cancer will be gone.

Unspayed female dogs go into heat throughout their lifetime.

The heat period (which happens every six months) is often stressful for female dogs because of the hormonal imbalances in their bodies.

Based on this, you can assume that overall, female dogs live longer than male dogs if they have had the procedure.

Unspayed or non-neutered dogs have a strong sexual drive because their bodies still produce sex hormones. These intense sexual urges put dogs at greater risk of injuries and infections.

An unspayed female will do anything to have her sexual urges fulfilled when she is on heat, including running away from home to find a mating partner. Non-neutered dogs tend to roam around looking for females in heat.

All these reckless movements increase their risk of traumatic accidents known to affect a dog’s life span. For instance, getting hit by a car.

Unneutered dogs can also get into potentially fatal fights with each other over a female on heat.

Is it better to keep a male or a female dog?

There’s no evidence showing what dog gender is better than the other in terms of lifespan Gender has zero influence on how long a does lives. But keeping a spayed female or neutered male dog is better than having an unspayed or non-neutered one.

Do female dogs live longer if they are spayed?

Yes, that’s correct. According to research, a spayed female dog’s life span is 23% longer than that of an unspayed dog.

Which breed of dog lives the longest?

Small dog breeds like the Yorkshire and Chihuahua have the longest lifespan compared to medium-sized and giant breeds.

An Australian Cattle Dog holds the world record as the oldest dog to ever live (29 years).

There is no evidence proving that male dogs age faster than their female counterparts.

There’s nothing to prove that male dogs live longer than female dogs, or vice versa. However, we can say that neutering and spaying will have a positive impact of your dog, whether male or female… as well as other linked health benefits.