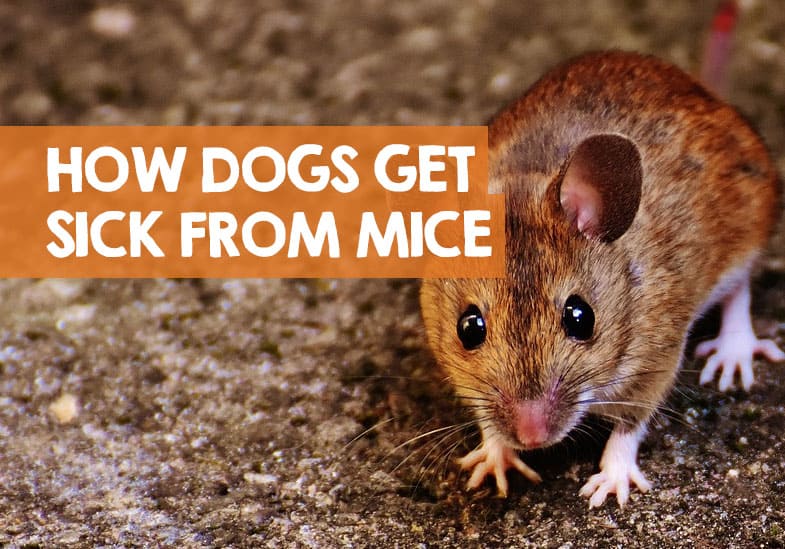 I read a statistic this week that mice invade an estimated 21 million homes in the United States every winter. That’s a lot of mouse poop! If you own a dog this has an added concern for those dogs that like to eat and roll in mouse dropping. There’s also the possibility of mouse feces contaminating their water bowl.

But how worried should you really be; can dogs get sick from mice droppings? I decided to investigate further to see what the truth was. Please read my helpful guide below which explains whether dogs can get sick from mice.

Can dogs get sick from mice droppings?

Starting off with mice dropping first and whether they contain anything toxic or bad for dogs. Here’s the short answer, then after that more detail on the various disease and poisoning risks.

Overall, the chances of your dog getting sick from eating mouse poop is relatively low. The reason I say that is because your dog would need to eat a lot of droppings and certain elements of chance would need to occur to make them sick.

For example, if you know that the mice in your location are being poisoned with bait, their poop could be very poisonous and toxic to your dog. This is the biggest risk to your dog’s health if they are eating mouse droppings.

The other possibility involving poop where mice can transmit diseases to your dog concerns leptospirosis. This is a rare bacterial infection (read more on Medical News Today) which is passed through mouse urine. If your dog is sniffing around in mouse poop and there’s some urine also in there, then they could get sick.

Other than that, most mouse poop should be free of disease that can transmit to dogs, albeit a very, very slight salmonella risk.

But of course, that’s just the mouse poop. Dogs can also catch and eat or find dead mice which they then chew on (or lives ones like this). This act can actually lead to other ways in which mice can affect dogs.

What happens when a dog eat mouse poop?

In short, nothing happens when a dog eats mouse droppings, unless your dog has eaten some poison or contracted a disease via the poop. You can find links to authoritative resources which describe possible symptoms of illness further down the page.

Can dogs get sick from mice?

Putting aside the small risk of your dog getting sick from mouse poop or droppings, there are different risks when it comes to the body of the mouse itself.

Dogs can get sick from mice in the following ways:

1. Poison in the mouse’s body

This is a very real concern as the same amount of poison that you can kill a two-pound rat is the same amount that can also kill a dog. However, it will take a few days for the poison to take affect with your four-legged friend.

If your dog is anything like mine, he will lap at water puddles and pools in the yard and garden. This isn’t advisable, as rainwater can carry disease and make your dog ill.

With mice in particular, it could lead to your dog getting leptospirosis if there is infected mouse urine in the water.

Handy Hint: Many people believe dogs can get rabies from drinking water. I decided to find out what the truth was, and you can see what I found by clicking here.

Rodents will often carry ticks, and those ticks can pass disease from the mouse to your dog. For example, if the mouse has an infection in their blood that could transmit via a tick to your dog, and then possibly to you.

There’s even a risk of the plague, where dogs can become infected and then pass the disease to their human owners. Whilst rare, the plague can be treated in humans successfully with antibiotics.

Handy Hint: Despite what you might have heard, it’s not possible for dogs to get rabies from ticks, but it’s still something you want to avoid!

There is also a chance that your dog could pick up a parasite from eating an infected mouse. Mice are prone to worms such as pinworm and tapeworm. Dogs cannot develop pinworm, but they are susceptible to tapeworm.

The CDC website says that dogs can get tapeworms also by:

“Swallowing a flea infected with a tapeworm larvae. A dog or cat may swallow a flea while self-grooming. Once the flea is digested by the dog or cat, the larval tapeworm is able to develop into an adult tapeworm.” (view source)

What diseases can mice give to dogs?

Mice can pass diseases to dogs which can in turn be transmitted to humans. Here’s a list of the possible diseases, no matter how slight the risk is.

Despite the name, this bacterial disease is also carried by mice and can sometimes infect dogs after a mouse bite. It is a rare disease in the US but can be very deadly with a mortality of 10% when passed to humans directly from a mouse, or even via a dog.

Mice can spread this disease to dogs through their urine, usually if the dog drinks from a contaminated water source. Symptoms will not develop for a few days but include nasties such as fever, shivers, increased thirst, vomiting, and diarrhea.

This disease can be fatal to dogs, with the PDSA animal charity website saying:

“If your dog has a mild case of lepto, your vet may be able to use antibiotics, a fluid drip and other medicines to help fight the disease. Sadly, if your dog becomes seriously ill with leptospirosis, you may need to consider putting them to sleep to stop them suffering.”

Many animals carry salmonella, including mice. Mice can transmit this disease to dogs via their poop, but it is very uncommon. Here’s what the FDA say:

“Salmonellosis is uncommon in dogs and cats. When the disease is seen in an adult dog or cat, the animal typically has another infection or debilitating condition at the same time. Puppies and kittens can get the disease if they ingest a large number of the bacteria.” (view source)

However, the disease can spread between animals and people, so it needs to be checked by a vet if you suspect a mouse gave this disease to your dog.

This is an uncommon disease that mice can transmit to dogs, but it is still a possibility. It’s passed from mice to dogs if they eat an infected rodent.

Here’s what the VCA Animal Hospital say about it making dogs sick:

“Tularemia is a rare infection in dogs and dogs are known to be less susceptible to illness than other species. Tularemia is often self-limiting although some dogs experience short periods of poor appetite, lethargy, and mild fever. Less frequently, dogs may show conjunctivitis, uveitis (inflammation in their eyes), draining abscesses, and enlarged lymph nodes.” (view source)

Can dogs get hantavirus from mice?

One disease often associated with mice is hantavirus, and rightly so. It’s extremely contagious and can spread from rodents to people, with no vaccine currently being available (July 2020).

However, dogs cannot get hantavirus from mice. It simply does not spread between the two species.

Whilst this should put your mind at rest, you still need to be cautious as it is found in mouse droppings and urine and can be transmitted to humans that way.

Disclaimer: Always consult with your vet for a professional opinion. The content in this blog post has been compiled and research by me, a dog owner.

Whilst mouse poop is not toxic to dogs unless it has bait poison in it, there is still a small risk it can make your dog sick. The bigger risk to your dog’s health from mice is by eating the rodent, or having infected urine get into its system.

However, the risks of mice to dog diseases are still quite small. The bigger risk is when your dog eats a poisoned mouse or some rat poison.

But the bottom line is you should avoid your dog eating mice droppings or eating dead mice as this is the only way to have peace of mind that they won’t get sick.

There are many health risks your dog is prone to from the various disgusting habits he might have. Here’s just a selection of the most recent I’ve blogged about.