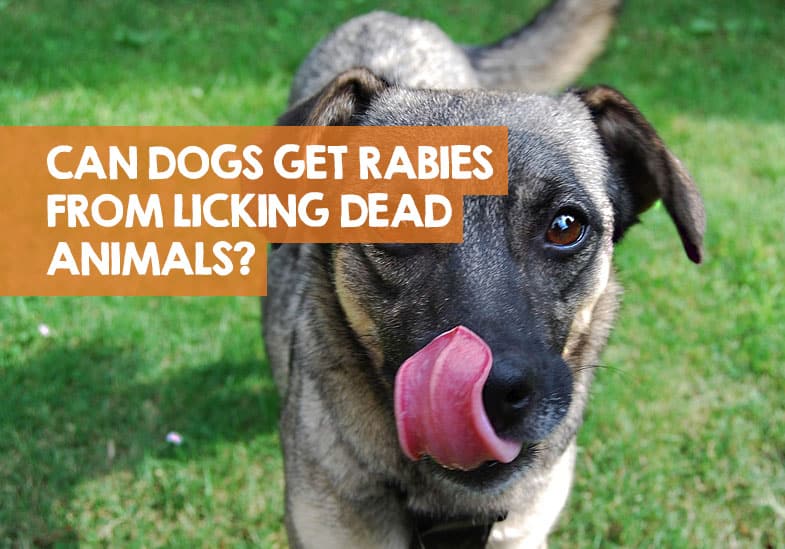 Rabies is a zoonotic disease which means it can be transmitted back and forth between animals and humans. Due to the nature of the disease, dog owners will rightly have concerns about contracting the illness from their dog licking and eating dead animals, or even licking up blood and eating feces.

To get the correct answer I spent an afternoon reading medical and governmental websites to see how likely it is for a dog to get rabies from licking dead animals. What I found was very surprising and didn’t end up with what I expected. I wanted to share that with you today, so here’s the short answer following by more in-depth specific findings relating to the United States, UK, Canada, and Australia.

Let’s just break that down a little bit to see what the reality is, as it needs to be explained more in more detail, so you understand the risks depending on where you live.

Why the risk of rabies from licking animals is so small?

I’ve read reports and investigation from around the world and have discovered the following which should put you mind at ease. The bottom line is that you dog is very unlikely to get rabies from licking blood and dead animals, here’s why:

Based on all of those factors, it weighs very heavily on the side of minimal risk. In fact, I would say that it’s almost impossible for your dog to get rabies from licking a dead animal or licking up blood unless certain criteria were met – and this is still a low risk whichever way you look at it.

You then have the additional reduced risk factor that there are only a select number of mammal species that rabies is most common in including dogs, bats, raccoons, foxes, jackals, cats, and mongooses.

Handy Hint: If you have a dog who likes to eat fox poo then you should really read up my report on what the risks to their health this bad habit can entail.

Can dogs get rabies from licking blood?

Rabies is not present in blood, however the risk is when a dog with rabies licks the blood on the open wound on a human. In cases like this, rabies can be transmitted via the rabid dog’s saliva into the wound of the human.

I then wanted to take a closer look at the risk factors depending on where you live around the world, here’s a breakdown country by country.

Rabies in the United States and Canada

Whilst not completely eliminated, rabies is still very rare in North America, and here are the annual statistics according the CDC:

Of course, that doesn’t mean your dog can’t get rabies from licking dead animals, but the chances are low, particularly from licking corpses or licking at the blood of an infected animal as previously discussed.

If you do wish to be on the safe side, there are certain animals you should avoid your dog getting at and licking. These are said to be racoons, skunks, bats, foxes, and coyotes.

Rabies in the United Kingdom

The chances of dogs in the UK getting rabies are extremely slim. According to the UK government’s public health website, rabies is common in Asia and Africa, and non-existent currently in England, Scotland, Wales, and Northern Ireland.

“Rabies does not circulate in either wild or domestic animals in the UK, although some species of bats can carry a rabies-like virus.” (read source)

The NHS website also has a section on rabies, and confirms what the UK government says, albeit with a small warning on bats:

“Rabies is found throughout the world, particularly in Asia, Africa, and Central and South America. It’s not found in the UK, except in a small number of wild bats.” (read source)

The bat comment here makes for an interesting read, and upon further investigation I found that in 2003 there were concerns over the death of a man in Scotland. According to press reports at the time, he died after coming into contact with a rabid bat, apparently being bitten by one whilst working.

Since then, more research has been done with this update on the UK Bat Conservation Trust website:

“A small number of bats in the UK have been found to carry rabies viruses called European Bat Lyssaviruses (EBLVs). EBLVs are transmitted through a bite or a scratch or from a bat’s saliva coming into contact with your mucous membranes. Therefore, there is no risk to the public if you do not handle bats. If you need to handle a bat wear gloves to protect from any potential risk.” (read source)

They go on to explain how 15,000 bats have been testing for rabies in the UK since 1986, and only 30 have ever been found to have the disease.

This means that whilst it’s a very low risk, there’s still a very slim chance that your dog could get rabies from a dead bat in the UK. Obviously, the elements would need to be aligned for your dog to get the bat’s saliva into an open wound, but it’s still a small risk, nonetheless.

Handy Hint: I’ve also written a guide about the risks of your dog getting rabies from drinking water from shared bowls and contaminated water sources.

Australia appears to have a very similar scenario to the one in the UK, meaning you probably don’t need to worry too much if your dog licks a dead animal here either.

“Rabies virus does not currently occur in land dwelling animals in Australia but ABLV does occur in bats in Australia and can be transmitted from bats to humans and to other animals. Only three cases of human infection with ABLV have been recorded since the virus was first identified in 1996.” (read source)

Just like I advise in the UK, try to avoid your dog licking a dead bat as this would present risk, albeit virtually zero chances of contracting the disease.

Handy Hint: Dogs will sometimes start licking the floor in your home constantly. Here’s what it could mean.

Other than licking a dead animal or licking the blood of an animal with rabies, there are other scenarios where you might be worried about your dog. I’ve answered those additional questions below.

Can rabies live in a dead animal?

Rabies can live in a dead animal, but not for very long. Some reports I’ve read state that up to 48 hours is very rare once the saliva dries up.

Another report says that the more likely scenario is where rabies survives for no more than 24 hours in temperatures of 70 degrees Fahrenheit.

Handy Hint: If your dog eats a mouse or rat, they won’t get rabies, but they could be at risk of other diseases and infections.

Can rabies be passed through food?

As we know, rabies is transmitted through saliva, so there is a small risk that rabies can be contracted from food. However, to do so a number of factors would need to align.

Can you get rabies from animal feces?

According to the Humane Society it is not possible for rabies to be transmitted via feces. If your dog has eaten or licked the feces of an infected animal, it’s unlikely to contract the rabies disease.

Disclaimer: I am not a vet or disease specialist. The notes in this blog post are based on what I have researched online as at July 2020 and could change at any time. If in doubt, you should always seek a professional opinion and expert advice.

To conclude, dogs can’t get rabies from licking dead animals. Dogs also can’t get rabies from licking blood. However, there are still some very small risks of rabies contraction in English speaking countries, so if you are at all concerned please always call your vet after your dog has licked a dead animal. You should also be aware that there are some countries where rabies is still common, and it is possible to get infected when a dog licks you.

I regularly blog about the gross things that dogs do, and some of the highlight can be seen below: