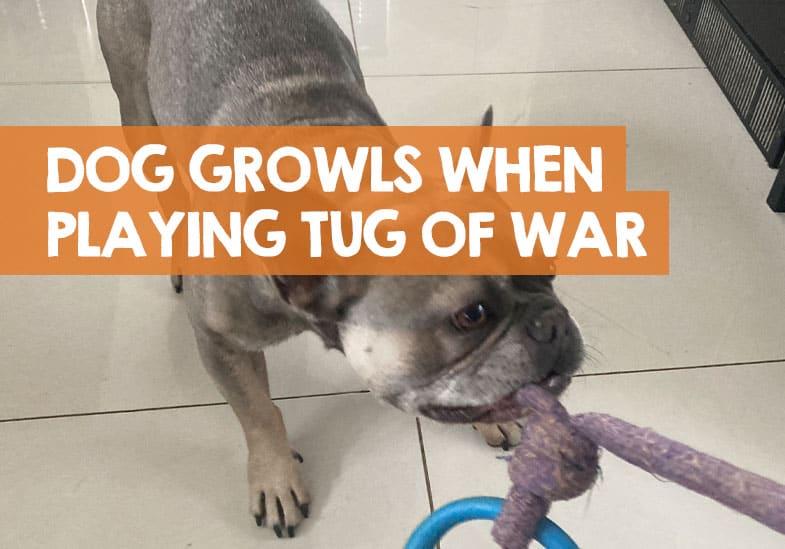 Dogs love playing tug of war. In fact, I’ve not met one yet who doesn’t love it. During the activity you will notice your dog growls when playing tug of war. Given that some people say the game can encourage aggression, is this growling normal, or something to be concerned about?

The truth is quite straightforward, but there are some caveats to be aware of. Here’s what the growling means first.

Of course, there is a limit to this. As the dog owner, keep an eye on your dog and look for signs that the growling during tug of war is still within the constraints of normal play growling. The dog’s body language is key.

If your dog growls when playing tug of war with raised heckles, that’s a sign that you are now beyond play.

The bottom line is all dogs growl when playing tug of war. It’s very normal. But you should limit how long you play for – I recommend no more than 20 seconds per game.

Does tug of war cause aggression in dogs?

Contrary to what you might have heard, tug of war does not cause aggression in dogs despite the fact they will growl when you play. In 2003, Rooney and Bradshaw released research to show that dogs who play tug of war are not aggressive but instead have more confidence.

“Dogs playing tug-of-war and fetch scored high on Confident Interactivity. Winning or losing these games had no consistent effect on their test scores. If the dog started the majority of the games, the dog was significantly less amenable and more likely to exhibit aggression.”

But they did warn that if your dog is already showing signs of aggression, tug of war isn’t a good game to play, particularly with dogs who exhibit possessive traits.

Is it ok if my dog growls while playing tug of war?

To summarize, dogs that growl while playing tug of war doesn’t mean they are being aggressive. Instead, it shows your dog is loving playing the game. Dogs will often growl when having fun and will do it to communicate – often that they want to continue playing.

Whilst it’s hard for humans to differentiate them, there are subtle changes between a play growl in tug of war, and an aggressive growl.

Play growling will often be accompanied by your dog showing other body language such as the “play bow” (head to the floor, butt in the air), bounding and springing, and tail wagging.

Don’t be worried if your dog growls while you play. But do keep an eye to make sure it doesn’t escalate into aggression.

Should I stop play growling?

You should not stop your dog from play growling. However, if the growls start to get more intense and their body language switches into more aggressive poses, you should stop the games of tug of war.

FAQs on growling when playing tug

How long should you play tug of war with dog?

Once your dog starts growling, you know he’s loving the game. But just how long should you play tug of war with your dog? I recommend short games of up to 20 seconds only.

That might sound very short, but there’s good reason why I say this.

Short games of tug mean your dog will not get over-excited. He also reduces the chance of injury. It also lets you use the game as training. For example, an expert at the American Kennel Club says this, which I completely agree with:

“Strive for two to three tugs in a session (tug-trade-tug-win-tug-trade) and then cap it off by asking the dog to do a ‘thinking’ exercise. Give them a treat and then put the tug toy away. We allow the dog to get high up into the clouds with excitement and then bring them back down to earth with some fun thinking stuff. Being able to cap off their excitement is a skill every dog needs!”

What are the best toys for dogs that love tug of war?

Call me old-fashioned, but you can’t really beat a piece of rope to get your dog growling during tug of war. Having said that, you can buy some toys on Amazon which add an extra layer of fun to the whole rope design. Here’s a great example with brilliant reviews.

Is playing tug of war with your dog bad for their teeth?

The answer to this is, it depends. Playing tug of war with a dog is good for their teeth and gums when they are puppies. It will help to alleviate their teething pain and stop the puppy from chewing though other thingsin your home.

However, if you have an elderly pet, then playing tug of war with your dog can be bad for their teeth. If they have loose teeth and receding gums, the tugging action could make it worse and certainly more painful.

Is tug of war bad for a dog’s neck?

When played incorrectly, tug of war can be bad for a dog’s neck. Owners will often make the mistake of using up and down motions during play. When you do this, your dog might be play growling, but this method of tug of war can hurt your dog’s neck.

Instead, you should sit low so the dog stoops, and only move the tug of war rope toy from side to side.

You should never pick your dog up off the ground with the tug of war toy. Once their feet leave the ground, the potential for a serious neck and back injury increases.

Dogs with cervical or spinal issues should never play tug of war.

Why do dogs shake while playing tug of war?

Dogs shake their head from side to side during tug of war, and sometimes quite violently. The reasons why they shake like this is twofold.

Firstly, it’s mimics their instinct to tear apart a piece of prey. If you can imagine it was a small rodent when your dog’s ancestors were wild, this shaking will help to incapacitate or kill the prey.

Shaking of the head during tug of war also is your dog trying to get you to let go so he wins. And if you didn’t know… you should let dogs win the game half the time to keep them interested.

Is tug of war good exercise for dogs?

Tug of war can be good exercise for dogs when played safely and in moderation. The exercise benefits it brings are an improvement in their upper chest strength, shoulders, and front legs.

The game is also good for dog’s eye to mouth co-ordination.

Handy Hint: There are many pros and cons to dogs playing this game. I believe the positives outweigh the negatives though.

Why do dogs like tug of war so much?

Dogs love to play tug of war, and love to growl during the game too. The reasons dogs love games of tug so much is that it appeals to their predatory nature. It’s an instinctive thing that harks back to them hunting and tearing apart their prey.

Even dogs with low prey drive love to play tug of war. In fact, I’ve never met a dog who doesn’t love the game.

Should I punish my dog for growling at me?

You should never punish growling, especially during play or when picked up. If you do, it will potentially inflame a situation, make the growling turn into aggression, and could make things a lot worse.

Dogs growl for a reason. Sometimes it’s play, other times out of fear. Understand which it is and react appropriately.

It is normal for dogs to growl when they play tug of war or with their toys. It’s not a behavior you should worry about or try to stop. It simply means they are having a great time, so embrace it.