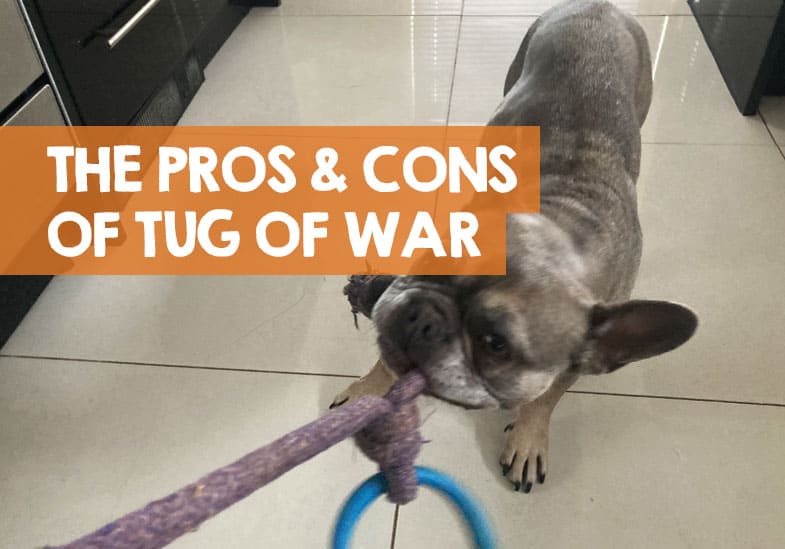 Tug of war is a game that dog owners the world over love to play. Not as much as their dogs do though! It can help to build your relationship with your pet, tire them out, keep them entertained, and even with some elements of training.

But of course, as with any physical game, there will also be risks in playing tug of war with your dog. With that in mind, I’ve put together a guide which explains how to safely play it lower down the page.

Before you read that though, here’s the pros and cons of tug of war with your dog, and my notes on whether it’s good or bad for them (hint: it can be both).

Pros (why is tug of war good for dogs?)

I firmly believe that tug of war is good for dogs. Despite what some owners say, tug of war does not cause aggression in dogs. In fact, research shows that dogs who play tug of war are not aggressive but instead have more confidence.

“Dogs playing tug-of-war and fetch scored high on Confident Interactivity. Winning or losing these games had no consistent effect on their test scores. If the dog started the majority of the games, the dog was significantly less amenable and more likely to exhibit aggression.”

However, if you do have a dog who is already aggressive in their behavior you might want to re-consider playing the game. The study found that when the owner starts the game, the dog won’t be as aggressive.

But overall, tug of war is good for dogs, so let’s start with the pros and advantages of the game.

1. Tires them out (physically and mentally)

Dogs need to be walked once or twice a day to burn off energy and keep them fit. But it should not stop there, as a happy dog is one that it kept stimulated both mentally and physically.

Playing tug of war with your dog can help with both. It keeps them fit, andstimulates their brain – for example, I’ve seen my dog adopt different tactics in order to win – clever boy!

Tug of war can be bad for a dog’s teeth in some circumstances, but overall, it’s a positive for strong teeth and gums, and can help puppies who are teething.

If you don’t yet have a tug of war rope, here’s one on Amazon.

3. It helps to teach bite inhibition and control

You should not let a puppy or dog bite and nip at your hands. It encourages the behavior and can lead to longer-term issues. Instead, you can play tug of war, as this helps young dogs develop their bite and impulse control.

An advantage of playing tug of war with your dog is they will start to learn bite inhibition. This is where the dog learns to control the strength of its bite – in other words seeing what the rules and boundaries are.

3. It can help build an owner and dog relationship

Owners and dogs that play together will build stronger relationships. The game is also your opportunity to try new commands such as “drop it” which I will explain more about lower down the page in a video.

Timid and nervous dogs can have their confidence built-up with games of tug. If you have the type of dog who cowers under your legs when other dogs or people approach, this could help them to come out of their shell.

Dogs will often exhibit destructive behavior when they are bored and stressed. This can include chewing furniture, scratching the carpet, or even trying to get through a wall!

When discussing the pros and cons of tug of war with a dog, this is a definite advantage as you can channel that behavior into the game.

Cons (is tug of war bad for dogs?)

In the main, when played safely and correctly, tug of war is good for dogs. However, there will be occasions and specific dogs where tug of war is bad, and potentially harmful.

Here are all the disadvantages to playing tug of war with your dog.

1. It’s bad for dogs who are possessive

Some dogs are known as “resource guarders” and can get very possessive of items. A game like tug of war could intensify this behavior, and result in aggression. Playing tug of war bad for dogs like this.

2. It could be bad for their teeth

Whilst I established that tug of war can be good for dog’s teeth during their puppy stage where it can help with teething, the opposite is true with older dogs.

If you have an elderly dog with loose teeth, receding gums, or other dental issues, then tug of war could exacerbate those issues and leave them in pain.

Similarly, at any age, if your dog (and you) is too aggressive in the play, then there’s always a chance the game of tug of war can be bad for your dog’s teeth. Know when to stop, and how hard to take it within reason.

3. It could be bad for their neck

Playing tug of war can be bad for your dog’s neck and should never be played with dogs who have a history of cervical or neck issues.

Also be careful with certain breeds who are more susceptible to spinal injuries. One breed that springs to mind is the French Bulldog who can put their backs out easier than other dogs.

One thing I have seen some owners do is lift their dog off the ground during tug of war. Most dogs won’t want to let go, but if they do and fall awkwardly, they could be seriously injured, most likely with the back and spinal areas.

How to play tug of war safely with your dog

Now you know the pros and cons of tug of war with your dog, you might fall into the camp of people who want to get the game started. If that’s you, please read the following guidance to how to play safely so not injure your dog.

1. Don’t play tug of war on a slippery surface

If your dog can’t grip the floor properly during play, he is at risk of slipping and sliding. This is where your dog can hurt himself and could badly injure his neck or back when playing tug of war.

Dog do not want to let go of the rope toy during tug. Despite not being able to keep their balance or footing, they will continue even if in pain.

2. Stop if your dog shows signs of over-aggression or over-exertion

Growling during a game of tug of war is perfectly normal. But you will know your dog well enough to know when the line has been crossed.

Even if they don’t get to that point, dogs in the brachycephalic breeds can become over-tired quickly and hyper ventilate in periods of high excitement and play, so go careful with them.

3. Let your dog do the hard work

Don’t start pulling your dog violently from side to side or up and down. This is the quickest way to hurt your dog’s neck playing tug of war.

Instead, let your dog do the work, your job is to keep the rope toy steady and firm, with some gentle persuasion here and there.

After all, your dog knows their limits… well, maybe.

Don’t pull the tug of war rope up and down, as this is how neck injuries occur. Instead, keep the rope low to the ground so your dog stoops, and only make movements from side to side, and not large jerking motions.

4. Make sure your dog knows when to stop

Teach your dog the “drop” command to help with overall behavior.

Whilst this isn’t necessarily important for all games of tug of war, it will be helpful if your dog ever picks up something dangerous you don’t want him to.

When you play tug of war with your dog, it gives you the perfect opportunity to do this training. Here’s a video to show you how.

If you suddenly released your grip, your dog could fall backwards and hurt themselves playing tug of war.

Instead, you should start to lower to the floor, reduce your resistance, and use the “drop” command before letting go.

Not always of course, by letting him win the game, it’s more fun. If he always loses, he will soon lose interest in the playing the game with you – here’s the psychology behind it.

I believe the pros and cons of tug of war with a dog are weighted more favorably to the advantages side. However, how you play the game is critical to keeping your dog safe.

The key thing to remember is to think about their spine. Keep your dog aligned, keep the rope low, and don’t let their feet come off the ground. By doing so, you can keep your dog safe when playing tug of war.