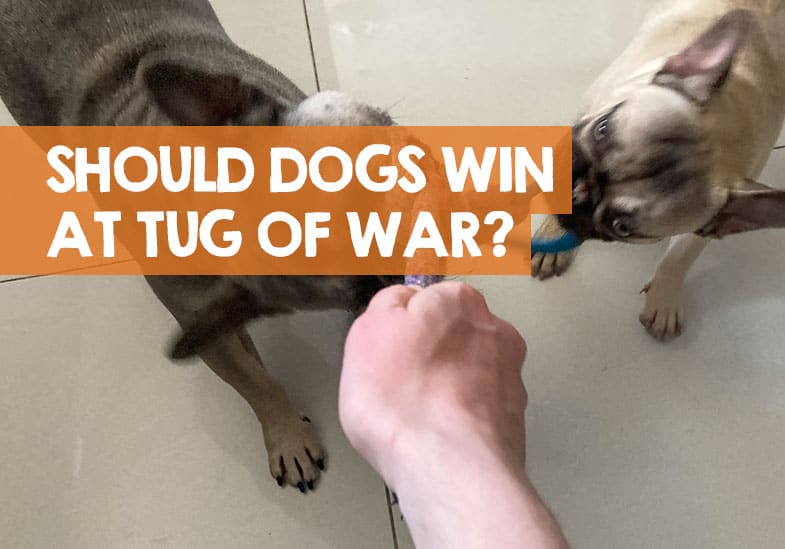 My dog loves to play tug of war with an old piece of rope and me. I’m not ashamed to admit that I try to not let my dog win at tug of war, and we have some great battles. But just how far should you take it, and can you hurt your dog playing tug of war? This question and more, is answered below.

The reason being that whilst you might be tempted to let your dog win tug of war games each time (because you don’t want to upset them), but this can lead to problems.

Keep reading as I share with you some common reactions to expect from your dog when playing this game, including whether you can hurt your dog playing tug of war, how long the game should last, and whether it’s even a good idea in the first place.

Why you should let your dog win tug of war (sometimes)

In short, let your dog win tug war sometimes, but other times, you need to win the game. The reasons for this are quite understandable when you break down the psychology involved.

You need to strike a balance. What I mean is, don’t let your dog win all the time. Try and flip the script from time to time. Give yourself a chance to win, too. This trick has several advantages, but these four top the list:

1. You’ll establish your authority (in a friendly way)

Here’s the deal: If you let your dog win tug of all the time, they’ll get the impression they’re forever in control of this playful relationship. And that’s where problems might start.

Your dog may develop aggressive tendencies since they know it’s the norm to overpower you every time you play.

2. The game won’t lose its spark

Think about it. Would you always look forward to playing a game you know you’ll end up winning?

Not really, right? I guessed so.

That’s the case for your dog. They won’t be psyched up for the next tug of war challenge if they know they’ll always be the winner.

3. You’ll teach them to behave positively on both occasions

Okay, you already know your dog does the happy dance when they win. But what happens when they lose?

You see, if your dog always has its way, you’ll miss out on a chance to train them to behave appropriately when they lose.

If you discover they overreact when the tug toy ends up in your hands, that’s the perfect opportunity for you to teach them how to remain calm and well-mannered even when defeated.

4. You’ll boost their confidence even more

It’s simple. If you make your dog win at tug of war on all occasions, they’ll think they win because it’s their right, not because they’ve worked for it. That’s why you should make them regularly lose, too.

How about an example.

Say, for instance, you do the first round of the tug of war. You let your dog lose, make him feel that it’s perfectly okay, then prepare him for a second round.

In the next round, allow him to win, then heap endless praises on him for doing such a great job! He’ll definitely know he put more effort into achieving what he couldn’t in the first session.

Handy Hint: I’ve also written a guide explaining why tug of war is good for dogs, but sometimes can be bad!

Should you play tug of war with dogs?

Yes, you should play tug of war with dogs. Not only is a great exercise for them but can also be a bonding experience between the two of you. Not only that, but dogs love to play tug of war.

It’s almost impossible to find a dog that doesn’t like tug of war.

Playing tug of war with your dog is one of the most classic dog games. It’s understandable why our canine companions love this game. I mean, it’s every dog’s golden opportunity to showcase their tugging prowess to their favorite person!

Tug of war is an excellent game of choice for you and your dog because you both benefit in many different ways, not just the ones I’ve already highlighted. For example:

Handy Hint: Remember, maintain an upbeat mood even when you make them lose. That way, you won’t kill the fun and they’ll be excited about trying their luck for the second time.

How long should you play tug of war with your dog?

I asked a dog psychologist this, and they said that you should not play tug of war for too long with your dog. Just short tug of war sessions of between 10 seconds to 20 seconds are fine.

If you play tug of war with your dog for longer than that, there’s a risk they can get too over-excited, and you will find it harder to calm them back down.

Should you play tug of war with a puppy?

Tug of war isn’t just a game for grown dogs. Puppies also enjoy the game, as you can tell from this video. Though, you must be extra careful when playing with your pup.

Unlike an adult dog, your pup’s teeth and jaw aren’t so strong.

So, if it’s your turn to win, avoid pulling the tug toy from your little furry friend’s mouth too hard. That way, you’ll prevent your pup from getting any jaw or teeth injuries.

How dogs act during tug of war games

When playing this game with your dog, you’ll notice them:

These reactions are normal because your dog’s been carried away by the game.

Plus, tugging makes them feel as though they are in a life-or-death struggle to take the toy away from you. They’ll go all-in during the game; hence the growling, tail wagging, and head shaking.

If you’re worried that your dog’s reactions during the game are a bit overstretched, you can calmly end the game and stash away the toy until the next session.

Why should I let my dog win a tug of war?

Allowing your dog to win from time to time will boost their confidence. They’ll also know that you can play a fair game. That will keep them motivated for the play session.

Is it okay to let dogs play tug of war?

Yes, it’s perfectly okay. This game is a form of exercise for your dog and an outlet for them to release tension and other negative emotions. Also, tug of war gives your dog a chance to bond with you.

Why does my dog growl when we play tug of war?

It’s normal. Growling is your dog’s way of vocalizing that they want and have to win.

Does playing tug of war make a dog aggressive?

Not at all. A dog will only become aggressive if the owner doesn’t establish the game’s ground rules and fails to communicate commands to the dog.

Why does my dog shake his head when playing tug of war?

Your dog shakes their head to display its anticipation of winning. Also, dogs generally have a behavioral instinct to grab and shake objects, and tug toys are no exception.

Can you hurt your dog playing tug of war?

Yes, it’s possible. It can happen if you use so much force to pull the tug toy from the dog’s mouth (when it’s your turn to win). That said, always pull the toy in moderation.

Is it okay for puppies to play tug of war?

Yes, it’s okay. But you also must be cautious. Their teeth and jaws are yet to fully develop, and you can cause injuries if you hold onto the tug toy too tight.

Most dog owners love playing tug of war with their furry friends, but how to end the game is often a head-scratcher to many. If  you wondered whether you must let your dog be the winner every time you play tug of war, then I hope I’ve helped!