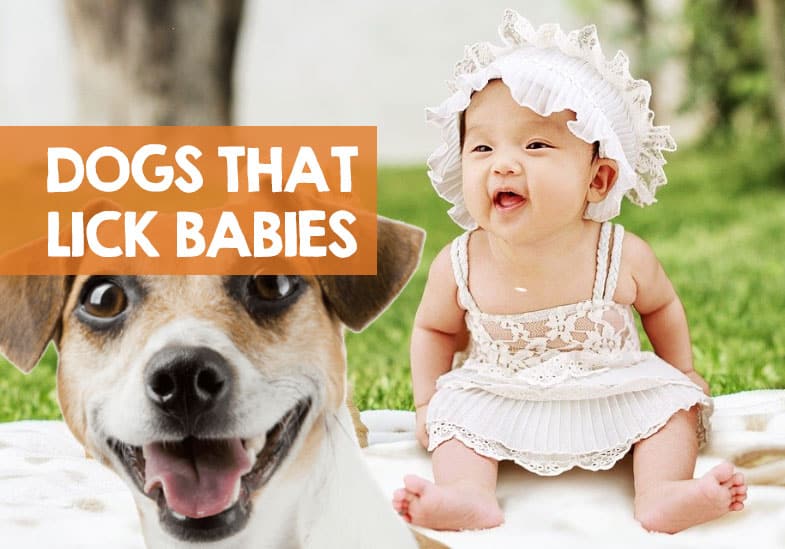 When you bring a new baby home, often you will see some strange and unexpected behavior from your dog. Some dogs can become obsessed with babies, but this does need to be monitored very closely, particularly if the dog starts to lick the baby.

Whilst your dog licking your baby might look harmless, it can have potentially drastic consequences, as I will discuss below. But first, here’s the short answer as to why it’s not safe for a dog to lick a baby.

Is it ok for my dog to lick my baby? It’s not ok for dogs to lick babies. Aside from the potential hazardous bacteria in dog saliva that can harm weak baby immune systems, licking can also be a sign of a dog asserting dominance over the small human baby, which could lead to aggression.

So, if your dog does lick your baby constantly, it’s something that you should put a stop to immediately. Face licking is certainly dangerous, and even when a dog licks your baby’s feet, it could be the sign of dominance being exerted.

Read on for all you need to know about dogs licking babies, and how you can take steps to be safer from possible risks.

There are a number of reasons why dogs lick babies, none of which should be permitted given the risks it could pose to the human infant. The licking reasons include:

There’s no doubt that it is dangerous to let a dog lick your baby. Not only could you be inviting a bite, but there’s also the potential for bacterial infections as discussed below.

Handy Hint:There’s a debate over whether dogs know what babies are. Given there’s no scientific proof, it’s another reason to be very careful when the two are in close proximity.

Is dog saliva harmful to babies?

There is the potential for dog saliva to be harmful to babies. Their mouths contain lots of germs that can be passed to humans. Babies have a weaker immune system than adults, so the risk of an infection via dog saliva is increased.

While dogs always seem to want to lick babies and it can look cute, think about it from a hygiene point of view.

You only have to watch where a dog sniffs and licks to know that there’s going to be lots of germs and bacteria around their mouth area.

That bacteria, including e Coli and campylobacter, are called zoonotic because they can be the source of diseases in humans and animals.

As well as bacterial infection threats, there’s also a risk that a dog licking a baby could pass on parasites such as worms into the infant. Worms are very common in dogs; in fact, almost all puppies are born with worms.

While the risk of infection is actually pretty low, it’s best to avoid any potential problems so don’t let your dog lick a baby.

If your dog does try to lick your baby, just distract him with a toy or throw a treat across the floor for him to chase

Ensuring that your dog is up to date on working and flea treatments is also a good idea, along with making sure that your promptly clean up after them in the yard and keep them well-groomed.

Is it dangerous for a dog to lick a baby?

Imagine for one moment that your dog is licking your baby’s face, the baby moves suddenly, and the dog reacts with a bite. That’s a fatal accident waiting to happen.

Babies and dogs are both unpredictable and should not be allowed to mix in close quarters like this where the dog is in a position to lick the child.

Or what if the dog decides it likes the taste of the baby after a lick? The potential consequences don’t even bear thinking about.

It could also be that your dog has no bad intentions at all, but simply wants to play with the baby. The dog mouthing and semi-biting might be okwith an adult or another dog, but has the potential to seriously injure a baby.

Why dogs my dog lick my newborns feet?

Dogs will lick newborn baby feet often because it’s the only part of the baby’s exposed skin that us adults will let sniff around and go near.

However, whilst it might seem harmless to let your dog lick your baby’s feet, please don’t let them. That harmful bacteria in the dog saliva can make its way up to your baby’s mouth.

You might be thinking how that could happen, but if you see a baby, you will know that they clasp their feet in their own hands and can suck their own toes. Those actions alone are enough to get the harmful dog saliva and bacteria into your baby’s system.

Above all though, the most obvious reason why you should not your dog lick a baby is the risk of the dog attacking. Not a month goes by without their being a press report somewhere of a dog attack on a baby.

No matter how much your trust your dog, it’s simply not worth the risk.

Handy Hint: I’ve compiled some medical research of real-life examples where dogs licking humans has led to disease transmission. You can read that in this blog about dogs that like to lick their owner’s eyes.

How to stop the dog licking your baby

If you’ve read other blogs on my Doggysaurus website, you will know that I am an advocate of reward-based training. I would use lots of the “leave it” type commands, and treats, along with distraction techniques.

To read a guide, I recommend this resource on Wag Walking.

Handy Hint: Not all dogs will get along ok with babies, some can actually get jealous and exhibit problematic behavior.

It can be super cute to see your dog and baby get along, but ultimately there will always be risks involved.

You might have the most well-behaved dog in the world who will be gentle with your baby. But just one lick from the dog could be enough to make your baby very ill, so it’s simply not worth the risk of having them too close together where licking can happen.

Once you’ve learned about more about your dog licks and baby, you might also find the following useful.