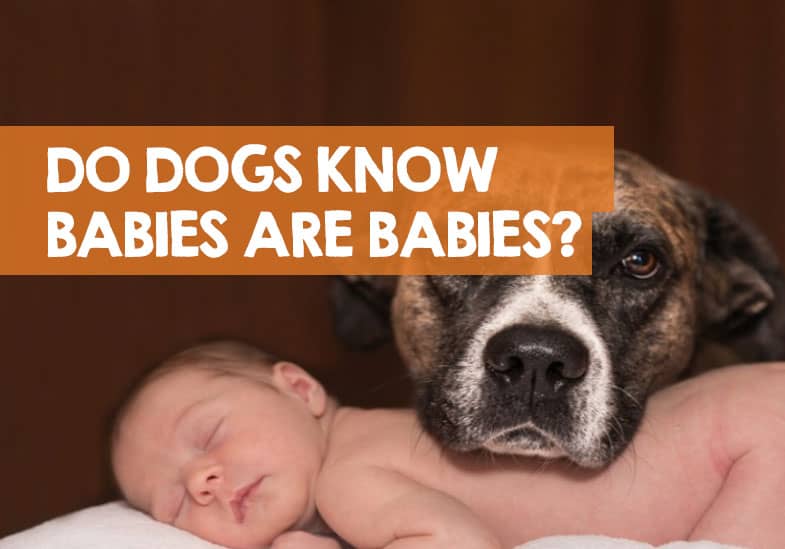 If you’re ever seen a dog around a baby, you might have seen them expressing more interest than you would expect. In fact, many dogs find human babies fascinating, and I will come onto why later.  But whether dogs understand that babies are babies, is open to debate. Here’s what I believe…

Do dogs understand what babies are? Dogs might understand that babies are human due to the smell of them, and how a baby brought into the social group. Whether a dog knows that a human baby is an actual baby, equivalent to a puppy, is completely unknown, with no scientific evidence to prove so.

The bottom line is this; there are no scientific studies that can prove that dogs know what human babies are. The is zero evidence to suggest that dogs know the difference between adults and babies.

However, what we can do is make some assumptions based on how we see dogs behaving.

Do dogs understand that babies are babies?

I have no proof of what I am going to now comment on. All I have for you is anecdotal evidence, of how I’ve seen dogs behaving around babies, plus accounts other people have told me.

You will have to make your own mind up. But here’s what I think…

When a new baby arrives in a dog’s home, it will smell like a human. Dogs have a sense of smell that is something like 10,000 times more accurate than us humans. They have 300 million olfactory receptors in their nose.

Whilst we might not think babies smell like us adults, I’ve no doubt that they will to a dog. To a dog, this small and noisy being that has entered their home, will probably smell just like another human does.

Therefore, it’s not too much of a leap of faith to think that this could mean your dog understand what babies are.

Does my dog know my baby is mine?

Some mothers will also wonder whether their dog will know the baby is theirs. Again, I would come back to smell. I imagine that your baby will smell like you do, so your dog could know that the baby is your baby.

There’s also the consideration that the baby has come into the house and has been quickly accepted into the dog’s pack, or social circle. You could assume that a dog will take the lead from us human masters in accepting the baby into the family.

Whether this means a dog understands it’s a human baby, and a mini version of an adult is another matter though. We simply have to assume that’s the case like we are with all of this rationale.

There are also multiple stories online where dogs have protected babies. You can see some examples of dogs guarding infants in another blog post.

When you take that type of behavior, it could be assumed that dogs are doing this because they know the baby is a human and part of their pack.

In fact, one person said it far better than I could on social media:

“All species start out as babies. As dogs are known to be pack animals who raise their own puppies in a pack, I think they instinctively know about babies and how to deal with them. I would go as far to say that dogs definitely know that human babies are babies and are a human version of puppies.”

Do dogs always know that babies are small versions of human adults?

No, and this is where you need to be very careful.

Just because one dog appears to treat a human baby with love and care, it doesn’t mean they all do.

I have a friend who brough the baby home from hospital and put the baby down in one of those bouncer chairs on the floor. Their small Yorkshire Terrier walked into room, heard and then saw the baby and the hair on his back went up.

My friends quickly picked the chair up off the floor, but for a few seconds their dog started to stalk around in a circle.

I am happy to say though that within an hour, the dog had been introduced to the new baby, and all was fine.

But some dogs don’t behave like that, and there have been instances where dogs will attack and kill babies… so never leave the two unattended and alone together.

Handy Hint: Some pet owners will let their dog lick their baby. Please don’t do that, as here are the health risks.

Dogs do seem to behave a bit differently when they’re around babies. They tend to take a special interest in what they’re doing, but as to why, well, we really don’t know.

Whether this even means that dogs understand what babies are in the grand scheme of things is open to debate. There is no proof.

Some dog lovers believe that it’s because they smell different from adults, and with our dogs’ fantastic sense of smell, it can make a huge difference in how they then perceive babies.

You might find that your dog gets excited when your baby is awake or when they cry or coo. They may even begin whimpering when they’re separated from their tiny human. In unfortunate cases, your dog might even become jealous of the baby and act up.

While we may never know what’s causes this attraction, we do know that it’s incredibly important to supervise dogs and children at all times when they’re together.

If you need to attend to something else, then that’s the time for your puppy to have some quiet time on the other side of the stairgate with a tasty chew.

We might never know what dogs are thinking, and can only ever make assumptions. Here are some more of those!