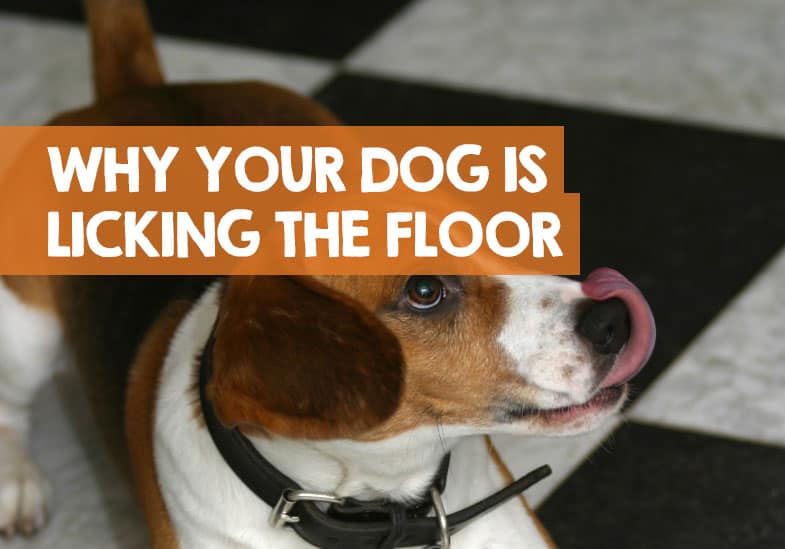 It might be a source of irritation for you, or it could be that you’re just be curious as to why your dog is licking the floor all of a sudden. They might do it after eating, before puking, at night, or just randomly… either way, floor licking is a very common habit for dogs.

Here’s the short answer on why your dog licks the floor all the time, followed by some more in-depth analysis of when it could be problematic.

Why does my dog lick the floor? Most dogs like the floor constantly the search for crumbs of food. However, if your dog has suddenly started licking the floor with no previous form, it could be the sign of a health issue such as gastrointestinal problems.

All dogs use their tongues to lick, that’s what they are made for.  Just like their sense of smell, their taste plays a pivotal role in the way they understand things. However, if a dog is regularly licking the floor, it can quickly turn into an obsessive behavior trait and become problematic.

Like humans, dogs can at times develop unhealthy habits. Although allowing your dog to lick the floor sometimes isn’t always bad, when it becomes a constant occurrence it can be stressful for both owner and pooch.

Not only that, it can sometimes be the sign of a more serious underlying health condition.

The bottom line is this; there are many reasons why this happens. It can be combined with panting or coughing, just when lying down, and even pavements outside. Keep reading as I will attempt to cover all scenarios off.

Why does my dog lick the floor in the home?

I’m sure every owner knows how important their dog’s sense of taste is to them. Just like sight and smell, a dog’s taste is crucial in helping them to perceive the world and to understand what is going on around them.

In fact, dog tongues contain millions of sensory cells, which gives them the ability to detect tastes that are undetectable to humans.

Based on that, you can imagine why dogs use their tongues so much… and also why they might enjoy licking floors in your home. As obvious as this might sound, the main reason they do this is because they are searching for extra food that us messy humans leave behind.

Dogs like to lick floors constantly, because by using their tongues, dogs will hunt around areas where you have had a meal or prepare food and will look for any crumbs or morsels of food that have accidentally dropped to the floor.

Unfortunately, this can often extend to any area of the house, especially if you have a habit of walking and eating at the same time.

Likewise, if you have young children, dogs will often lick the floor around where they have eaten – obviously due to most babies or toddler’s messy eating habits.

Why is my dog licking the floor all of a sudden?

However, it is important to note that floor licking in dogs can often be a sign of more serious underlying conditions.

If your dog starts to lick the floor all of sudden and won’t stop, they could have a condition known as ELS (Excessive Licking of Surfaces).  It can include them licking anything they can including walls, furniture, carpets, and even pavements outside.

Handy Hint: If you also see your dog rubbing his face on walls as well as the licking, then it could be down to what I discuss in this guide.

According to a recent Canadian study, a majority of dogs who licks floors have some sort of gastrointestinal problem.

“In a prospective clinical study out of Canada, underlying GI abnormalities were noted in 14 out of 19 study dogs with a history of excessive licking of surfaces.”

Thankfully, with medication and the potential elimination of trigger foods, ELS can easily be brought under control. In fact, studies show that with treatment, 60 percent of dogs show improvements, and more than half stop their excessive licking habits completely.

Despite this, there are other medical issues can be the reason why your dog licks the floor all of the time. Some of these are more serious than ELS.

In the majority of cases, it won’t be anything serious, however, it never hurts to be cautious when it comes to your dog’s health.

Likewise, you shouldn’t be afraid that you are wasting your vet’s time as they will understand your concerns.

How to stop your dog licking the floor

If your dog is licking the floor due to an obsessive habit, there are a couple of things you can do to combat this behavior. At times, dogs will lick the floor because they are bored or anxious.

Pretty soon this can turn into obsessive behavior, especially if a dog is left alone for long periods. Thankfully, the solution to this can often be as simple as exercising them more regularly than usual.

If you are unable to get home to walk your dog during the day, asking a friend to come and walk them can pay dividends. Likewise, many companies offer this service if you are unable to find an available friend. For high energy dogs, toys can also help to keep them occupied whilst you are absent.

If you notice your dog is licking the floor when you are home, you can distract them through a variety of methods.

For example, you can take them out into the yard and throw them a ball or play tug of war. After some rigorous play, your dog should start to become tired and this will probably stop them licking for at least a little while.

Sometimes dogs will lick obsessively when they are stressed or anxious. Recognizing when your dog is in this state can help you to comfort them and in turn, stop chronic licking from getting out of control.

When your pup is relaxed their ears will be back, and they will often look like they are smiling. In contrast, stressed dogs may pace around, shake, or show wide eyes and dilated pupils.

To further help your dog relax you can teach them a routine made up of rudimentary tricks such as sit, lie down, and heel. These tricks can go a long way in making them feel more comfortable, especially if there are treats involved!

However, it is important to note that if you notice your dog is consistently stressed you should take them to the vet – sometimes there is a limit to what we can do for our dogs without further help.

Why your dog is licking you

However bizarre this might sound; dogs will often lick us just because we taste good to them. Despite being unaware of it, we can at times have tiny particles of food on our clothes or body that they can detect.

Similar to this, dogs will sometimes lick at our arms, hands or face because they like the saltiness of our skin – this is especially true for dogs who rarely show affection.

Additionally, dogs will, at times, use their tongues to try and attract our attention. If your pooch is wanting to play or is hungry, he or she might jump up onto the sofa and give you a quick lick (here’s what I previously wrote about dog licking and rabies if you are worried).

Dogs are clever, and they will learn quickly how to get your undivided attention.

Whilst your dog’s licking may be a sign of affection, it can be irritating if it is a constant occurrence. To help stop this habit, there are a few things you can try.

For example, changing your body wash, soap, or perfume can sometimes be enough to deter your dog from licking you. This might work because you will have altered the body scent they have become used to. Additionally, they may not like the product’s new taste.

It is also important to remember that if a dog has used licking to communicate for most of its life, it will be hard to train this habit out of them.

Therefore, you should not scold them or treat them harshly if their licking begins to irritate you. Instead, you should try to reinforce acceptable levels of licking positively.

Handy Hint: Whilst it might seem cute, you could actually get sick from a dog that likes to lick your face and eyes.

The importance of licking in a dog’s life

It might be of interest to know that dogs lick to help heal themselves. Their saliva contains enzymes that kill off bacteria, which helps them to get rid of dead tissue as well as clean any dirt from wounds.

Likewise, there is evidence to show that licking can also have a positive effect on combating E.coli, and other harmful bacteria such as Streptococcus canis, which can be passed from dogs to humans.

As most of us will be aware, licking is also a major sign of affection for canines, with this even being true for wolves.

Dogs will lick both their pack members and humans to show their love and affection.

However, this can quickly progress into an unwanted barrage of sloppy dog kisses, as many of us have experienced firsthand. Although this type of behavior seems harmless at first, just like licking the floor, this can quickly turn into an obsessive habit if left unchecked.

Most dogs will lick the floor from time to time. After his meals, my dog will lick obsessively on the floor around his bowl in a meter radius – he is determined to get every last morsel of food!

However, as I’ve now established, the behavior could be the a problematic health issue, so if in any doubt always talk with your vet.

Here are some related blogs posts you might also identify with.