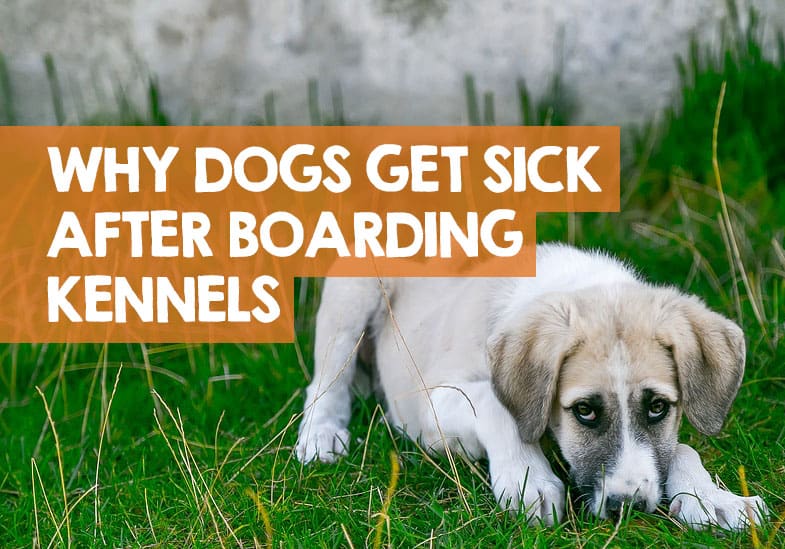 When you entrust your dog into the care of boarding kennels you have to assume that they will do everything in their power to take good care of your dog. Most of the time they will, but there can be occasions where your dog got sick after boarding. Dogs can get sick from kennels, and sometimes not for the reasons you would think.

It your dog is sick from a kennel stay it doesn’t necessarily mean it’s the kennel’s fault. In this helpful guide I will explain possible reasons for your dog vomiting, what it might be, and the illnesses that dogs can catch from kennels, no matter how low the risks are.

Can dogs get sick from boarding?

Dogs can get sick from boarding for various reasons, and it’s not always due to a transmittable disease or illness. For example, stress can make dogs sick in kennels, as can a change to their diet… all of which are common during and after a boarding stay.

Unless you have a vet’s diagnosis, it’s not always that easy to figure out why your dog is always sick after a kennel visit, but some of the more common reasons or illnesses your dog can catch when boarding is listed further down the page.

What can dogs catch from kennels?

Most dogs will have had injections as puppies to guard against disease and sickness such parvovirus, hepatitis, leptospirosis, and distemper. Kennels will not accept your dog into their care until 1 to 2 weeks after they have had their final vaccinations.

You should also consider a kennel cough vaccination. It’s a quick and painless spray up their nose, no injections needed (see how on Vet4Life.co.uk).

And with worming and flea treatments, make sure those are current too as it’s courteous to all the other dogs staying in the kennels.

Some sickness and disease are more common than others in boarding kennel scenarios. The biggest possibilities for why your dog are vomiting or sick listed below.

Make sure that your dog has their tick and flea treatment before they enter kennels, as parasites like this can easily jump from dog to dog.

When we put our dog into boarding, we didn’t want him to get sick so bought a Seresto collar for him (view Amazon prices), which adds an extra layer of protection.

Similar to how humans get the flu, canine influenza is spread through coughs and sneezes. It is not a deadly disease but will make your dog feel poorly and need a lot of rest and recuperation.

Canine flu is mostly transmitted these days in animal shelters, so it’s not spreading widely among dogs in general. There was a large outbreak in a Chicago kennel where hundreds of dogs were infected within days. Dogs that don’t frequent places like day care and boarding don’t necessarily need the vaccine, though many of those places now require it.”

Gastrointestinal viruses are among the most common bugs dogs can catch from kennel stays. They are very contagious and spread through contact, leading to vomiting, diarrhea, fatigue, and loss of appetite – there’s even a risk of that passing onto humans via fecal matter traces.

In the main, stomach bugs only tend to last for 24 to 48 hours with healthy dogs. They will be more severe in older dogs, or those with pre-existing health conditions.

Handy Hint: There are multiple reasons why your dog might come back from a kennel stay with diarrhea. I’ve listed them here and including tips on how to help prevent it.

Ringworm can make a dog sick from kennel stay but is mainly found in dog shelters where the medical history of the dogs isn’t always known. More common in puppies and older dogs, it’s a fungus that affects the skin.

The cough is spread via the air and drinking bowls, and is most likely to occur when dogs are in close proximity to each other, such as in boarding kennels – as the name suggests.

“Many dogs get kennel cough during their lives. It’s a common infection of the respiratory system with symptoms like coughing and hacking. It sounds bad but usually clears up without needing treatment.” (view source)

Then there are the really nasty and serious diseases that are rare in places like the UK, United States, Canada, and Australia but do still have a degree of risk. Most of the diseases below will be protected against by your dog’s injections as a puppy.

Also known as Weil’s disease, leptospirosis is a bacterial infection that is passed between dogs in urine. For example, if a dog was to drink water that was contaminated with urine from a dog with Weil’s disease, it could pass to the dog, and then spread to humans.

However, it is very rare, with the UK’s Health Protection Agency saying there are on average just 40 cases reported each year.

If your dog has his injections as a puppy, he will have been vaccinated against parvo. Vaccination is extremely effective meaning it’s quite rare for dogs to contract parvovirus in kennels.

Providing the boarding kennel has examined the paperwork of all dogs coming into the kennels, this should be low risk in terms of what dogs can catch from kennels.

This deadly disease is guarded against with vaccinations and has almost been eliminated in domestic dogs. It’s rare to see canine distemper in the Western world, and even rarer for dogs to catch it from kennels.

The vaccination for canine hepatitis is one of the mandatory injections that puppies get given. Here’s what this disease is according to the WebMD.com website:

“Canine herpes virus lives in the reproductive and respiratory tracts of male and female dogs. In adults, the disease is transmitted via aerosol and direct contact, including sneezing, coughing, nosing, sniffing, licking and sexual activities between an infected and an uninfected dog.” (view source)

Rabies has almost been eliminated in English-speaking countries, meaning it’s very rare for a domestic dog to have this sickness in a boarding kennel. It’s unlikely that your dog would get rabies from sharing drinking water with another dog.

In the US, Canada, and UK, vaccination programs for dogs means the numbers or rabies cases reported annually is negligible… and certainly none that have made a dog sick after boarding kennels.

It’s worth noting that the chances of your dog getting sick after boarding due to any of the serious diseases above is very slim.

My dog is vomiting after a kennel stay

One of the more common bouts of vomiting after boarding is when you see yellow bile. As with any bout of vomit or sickness, you should get an expert opinion from a professional vet.

Tell the kennels your dog is sick

If your dog has got sick after boarding, you should tell the kennels immediately.

It might not be the boarding kennel’s fault your dog has is sick after a visit, but you should still make them aware of the problem. If they are having more than one complaint on the same topic from other owners, they might be able to trace the cause better.

Above all, by just asking them a few questions you might be able better understand why your dog is sick a kennel stay, possibly ruling some things out. Here’s what you should ask them:

If you take your dog to the vets, you should also give the kennel notice of what the diagnosis was. This means they can check if it’s something that could have been passed on to other dogs in their care.

If my dog was sick after a boarding stay, I would always consult with a vet in order to rule out serious illness and disease.

The notes in this guide are for informational purposes only and are a result of my own online research and not that of a professional vet.

It’s not unusual for dogs to come home sick from kennels. A lot of the time it will be stress-related, particularly if diarrhea is the symptom.

I regularly write about boarding kennels and here are some of the more recent guides: