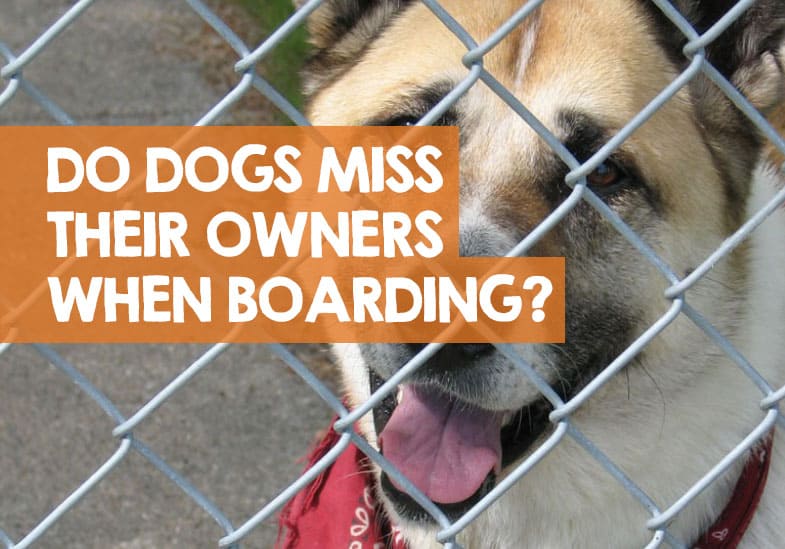 I’ve previously related an account of when we had to leave Claude in kennels for the first time and how stressful it was for us as owners. Aside from his health and welfare, our main concern was one of guilt and whether he would miss us when boarded.

The week we were abroad for passed quite quickly for us, but I am not sure if the same could be said for our dog. All I do know is that when we arrived at the kennels to pick him up, he was really excited to see us. When I saw that, part of me really wanted to believe that he had missed us whilst we were gone.

But what is the reality, and do dogs miss their owners when in kennels? I decided to see what science says, and have the short answer and opinion below, followed by references to the various research.

Will my dog miss me when I board him?

Research suggests that dogs do miss their owners when boarded in kennels. There have been multiple studies to see how dogs react when their owners leave, and all point to changes in the dog’s behavior.

However, don’t let that put you off putting your dog into boarding kennels. Not all dogs get sad when boarded, and most of the time it will be a positive experience for them. If it’s a reputable boarding kennels they will get spoiled, lots of play with other dogs, and loads of attention.

What studies show about dogs missing their owners

Your dog loves you and will miss you when you put them in kennels. That doesn’t mean they are going to be depressed though.

We know they miss their owners due to studies that have been conducted over the last few years. You can do a quick test yourself to see how likely it is that your dog will miss you when at kennels.

For example, when you get up to leave the house, how does your dog react?

If you a have a dog that tries to come with you, then he’s probably more likely going to miss you more. If your dog is quite relaxed about you leaving the house, he will probably cope better with the boarding kennel environment.

The most famous study was conducted by Gregory Berns, a Professor of Neuroeconomics at Emory University. You can read more about him and his credentials on Wikipedia.

Of course, this isn’t conclusive proof by any stretch that dogs miss their owners when boarded. It could simply mean that a dog missed a familiar scent or company from a trusted source, rather than the person themselves.

We can get additional insight on the idea that dogs do miss their owners by looking at a further piece of research. Unfortunately, I have no details of when this study was completed. I heard about in in a YouTube video which I will embed below.

The research looked to see how dogs behave around 3 different people, their owner, someone they are familiar with, plus a complete a stranger. The researchers did this by making the 3 people walk through doors, leaving the dog behind.

As you would expect, their behavior showed that they preferred their owner. During the test, the 3 people went through doors, and the dogs would mainly wait behind the door their owner went through.

This study makes me more certain that dogs do miss their owners when in kennels.

Do dogs have a perception of time?

Then there’s the consideration on how long you leave your dog for, and whether they have a perception of time. For example, if you’re going to be away for 2 weeks and are leaving them in kennels, because it’s longer, does that mean they miss you more?

According to Gregory Berns, time does affect a dog’s reaction to their owner:

“In 2011, Therese Rehn and Linda Keeling reported the effect of time left alone on dog behavior. They found that after 2 hours, dogs greeted their owners with more intensity than after 30 minutes of being left alone. However, there was no difference between 2 and 4 hours. This suggests that dogs can tell the difference between 30 minutes and 2 hours, but beyond that it is unclear.”

After 2 hours of being left home alone, the dogs would welcome their returning owners with more tails wagging and licking of lips. These are all signs of excitement and happiness.

This was markedly different to how they behaved after 30 minutes of being left alone, so whilst we don’t know if they know how long you’ve been gone, they do seem to be able to tell the difference between lengths of time.

Handy Hint: Did you know that scientific studies seem to suggest that dogs might view their human owners like parents, so it’s now wonder they miss when boarding in kennels!

Our own dog doesn’t seem to care too much when we leave the house, he’s quite chilled out. But he is definitely excited when we come home.  Because of this, I’ve got no concerns over him not loving us like we love him.

But as for missing us? Yes, I think he probably does a little. It’s either that he misses us as people, or possibly has have FOMO (fear of missing out) on something awesome and fun.

We understand that humans miss other humans due to emotional connections we have with each other. Dogs also have the ability to love and bond, any dog owner will tell you that…

Based on this, I think your dog will miss you when you board him, but what degree, it’s hard to say exactly. Some dogs suffer with boarding kennel stress more than others.

I’ve written lots of guides on dogs, puppies, and boarding. You might find the following links helpful in putting your mind at ease: