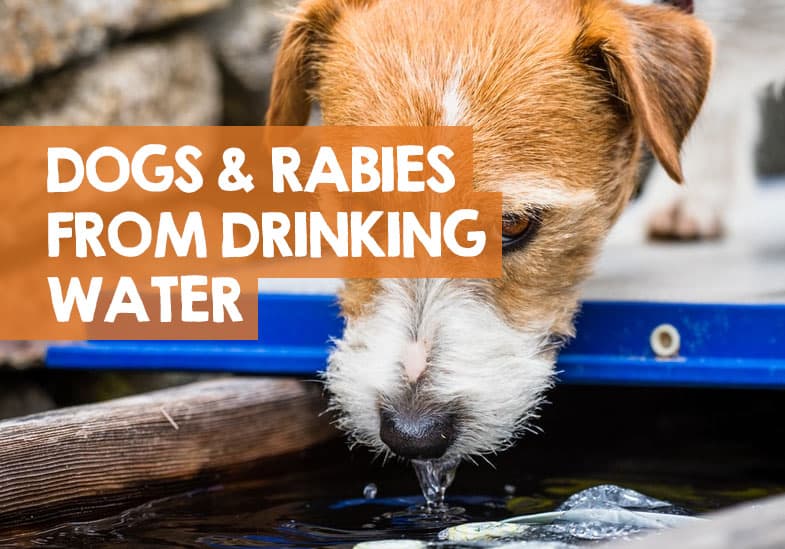 Rabies is one of those frightening diseases that has many misconceptions and a lot of misinformation. Being one of those diseases about which there are a lot of myths, many dog owners will unnecessarily worry about things; for example, whether dogs can get rabies from drinking water.

In this short guide I will explain what the risks of a contaminated water source is to your dog, whether rabies can be transmitted through drinking bowls, and through water between dog and even humans.

First let’s start with the short answer about dogs getting rabies from sharing water. Then I will go into detail on the why, hopefully dispelling some of those myths for you.

Can dogs get rabies from drinking water? It is very unlikely for dogs to catch rabies from sharing drinking water for a number of reasons, the main one being that rabies can only live for a couple of hours in water. Rabies is also mostly contracted via an animal bite, not through drinking water.

According to an academic paper I found online, here’s the answer to a question about rabies being spread through water:

Why it’s unlikely your dog will get rabies from water

To expand on the short answer above we need to examine a few facts about rabies. All of the information presented below I have gathered and collated from authoritative sources such as the Centers for Disease Control and Prevention (CDC) and the World Health Organization (WHO).

Can dogs get rabies from sharing water?

As with all the scenarios in this guide, it’s extremely unlikely that your dog will get rabies from sharing water. In order for your dog to get rabies from a shared water source a number of factors would need to align, and even then, it would be a slim risk.

Can you get rabies from water bowl?

Humans and dogs are very unlikely to contract rabies from a water bowl, for many of the reasons already listed above. There’s also this great quote that I found on the website of the Commonwealth of Pennsylvania website:

“It’s possible for the rabies virus to be transmitted through water if an animal is drinking out of a water dish at the same time as another rabid animal or shortly after the rabid animal was drinking. The virus will not survive for long in water, but it will last long enough to possibly infect another animal.” (view source)

Whilst that sounds scary, you still need to take it with a pinch of salt as there are very few dogs in North America with reported rabies, and in the UK and Australia the disease is virtually eliminated.

Can dogs get rabies from drinking a contaminated water source?

Some dog owners might have concerns if they see a dead animal in a stream or water source, and then see their dog drinking the water.

Rabies is extremely unlikely in this situation because rabies is in an animal’s saliva, and quickly dies off when the host animal dies. Rabies is also only really transmitted via a bite, and so would need to get into your dog’s bloodstream.

Based on this, it’s almost impossible for a dog to get rabies from drinking a contaminated water source where a dead animal has been found.

Plus, rabies is very rare in the Western World and English-speaking countries (more on that in the next section).

Handy Hint: Some dog owners think that distilled water is healthier for their dog, but the truth is probably quite different.

Why rabies is unlikely where you live

In North America you can still find some animals with rabies, the most common ones being raccoons, skunks, and bats. However, canine rabies has been eliminated throughout the United States and Canada, so the chances of your dog catching rabies by drinking water contaminated by another dog is very slim.

In the UK and Australia there are virtually no instances of rabies at all, with it only being reported in certain breeds of bat, and no cases of canine rabies for many years.

If you were to travel abroad though, things are different. For example, there are cases of canine rabies in India due to the number of strays.

People often worry about their dog getting rabies, but the truth is it’s very rare. In the United States, canine rabies cases were at just 63 in 2018. Given that it’s been estimated there are 89.7 million dogs in the USA, that’s just a 0.00007% rate. You have more chance of winning the lottery.

But it is an understandable concern, and so much so that I’ve written multiple guides on the subject of dogs and rabies which you can browse below.