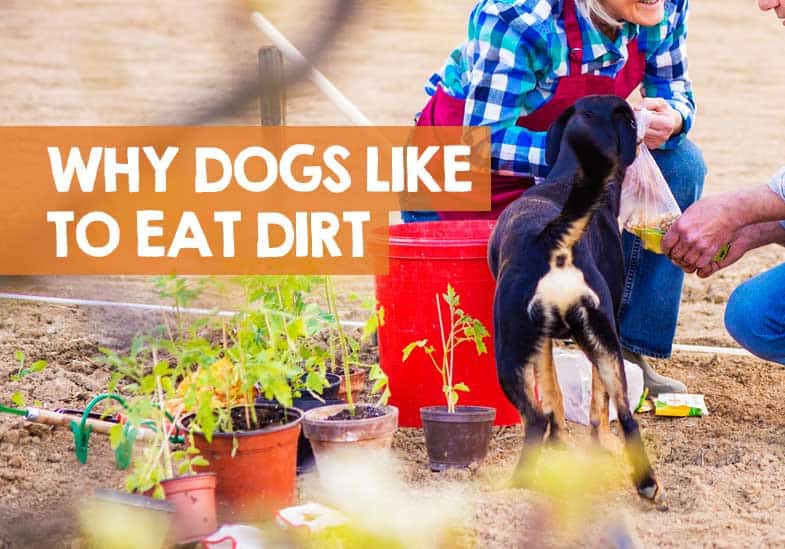 Dog ownership isn’t always plain sailing. Dogs give us so much pleasure, but there are habits and behaviors that will drive you mad. I put a dog eating soil from pots and plants or eating up dirt in your yard firmly in that category.

Nowhere is this trait of eating dirt more prevalent than in dogs who are enamored with food. Not only is this trait common, but it is nearly always present in popular breeds of dogs, such as Labradors, Golden Retrievers, and German Shepherds.

But why do dogs eat dirt from plants or when they are outdoors in gardens and yards? I’ve researched this strange phenomenon for you, the side effects of eating dirt, and will also explain what it means your dog is lacking.

Why do dogs eat dirt? Dogs will eat dirt from houseplants and soil from pots or outdoors for reasons as diverse as boredom and stress, smelling something nice in the dirt, a lack of nutrition, or a health condition such as pica.

That’s the short answer, but there’s a lot more to it, including whether eating dirt will hurt your dog, and how you can possibly ascertain what the reason for eating soil is.

Why do dogs eat dirt from houseplants and outdoors?

The reason why so many dogs come in from the yard with a mouth full of dirt or sand can be baffling at time. Even more confusing, is how common this behavior is, not only in dogs who to eat anything they find, but also in picky pooches.

Looking online, there are thousands of dog owners who have reported this strange phenomenon, all over the world. Therefore, it comes as no big surprise that many people are taking their dog’s habit of eating dirt seriously, especially when it pops up out of the blue.

Whilst it appears to be a disgusting habit to us, eating dirt is perfectly normal behavior for canines, and in moderation, should not be considered as bad if it was just a little bit of soil.

The reasons why dogs eat dirt are as follows, with more details afterwards.

Why dogs eat dirt from soil and plants

Is it okay for dogs to eat dirt?

Should you be worried if your dog eats dirt?

The main concern most owners have when it comes to their dog’s dirt-eating habits is whether it could be a sign of a more serious underlying health condition.

However, instead of a health condition, dirt-eating is most often the result of a psychological disorder called Pica. Despite this disorder not being all that dangerous on its own, it can cause problems if it is left alone or untreated for long periods.

Pica is defined as an eating disorder that involves animals (or humans) eating items or materials that are not typically thought of as forms of food, or do not have nutritional value.

In dogs, it is normally thought to be caused by anxiety or depression, but it can be caused by other non-psychological problems as well, such as diabetes and vitamin deficiencies.

Pica is often triggered by an emotional response to stress or anxiety. For example, canines with separation anxiety are almost always at a higher risk of developing pica, and it is not uncommon for owners to return home and find that their pooch has destroyed their living room – or eaten the soil from pots or dirt from plants.

The most common items dogs will eat when suffering from this disorder are dog toys, hair, paint chips, wood, sand, feces, rocks, and the aforementioned dirt.

However, anything nonedible can potentially be consumed by a dog suffering from pica, even furniture, walls, or other expensive household items.

Pica is more common in adolescent and adult dogs than it is in puppies. Most puppies will ingest dirt or other non-edible items from time to time. However, this is usually a result of their curiosity and desire to explore the world around them and is rarely a result of pica.

Furthermore, the majority of puppies will grow out of this habit of eating inappropriate things, moving on to dog food and other appropriate foodstuffs.

However, if your puppy is starting to reach adolescence and is still eating dirt, then you should get them tested for this condition.

What is anemia, and how can it affect your dog?

Anemia is a medical condition that can also be responsible for dirt-eating in canines. Unfortunately, anemic dogs do not have enough healthy red blood cells to carry oxygen to the tissues in their bodies, resulting in a decreased absorption of iron and B vitamins.

As a result of this, anemic dogs will often hunt around in the dirt, as well as in grass and sand, looking for the nutrients and vitamins they so crave.

Anemia can arise in dogs through various means. However, it is mostly caused by your canine having intestinal parasites or a flea infection, as well as blood loss associated with a severe injury.

Next to the consumption of non-edible materials and objects, common symptoms of anemia are lethargy and an increase in appetite – dogs who are suffering from this condition will often eat voraciously, finishing their food in mere moments.

Treating anemia can be complex, and depending on the severity of the condition, can sometimes only be treated by a blood transfusion.

However, there are other methods of treatment such as antibiotics that do work for less severe cases (typically those caused by parasites).

If you suspect your dog has anemia due to them eating dirt, then your first course of action would be to take them to the vet. There they will be able to accurately diagnose the problem.

Will eating dirt hurt my dog (possible side effects)?

It should come as no surprise that allowing your dog to continuously eat dirt can negatively affect its health and might hurt them in the long-term. For example, the consumption of large quantities of dirt can cause impactions in your dog’s intestines.

This condition is very serious and can be life-threatening, with surgery often being the only option for treatment. If you suspect that your dog has an impaction, then you should take them to the vet without delay.

Usual signs of intestinal impactions that you should look out for are vomiting, diarrhea, bloating, drooling, burping, and lethargy.

Depending on the area you reside in, dirt can contain pesticides, fertilizers, and numerous other toxins that are dangerous to dogs. Thankfully, toxin poisoning from dirt is rather rare in canines, due in part to how much dirt dogs would need to consume for this to occur.

However, you should still actively discourage your dog from eating dirt whenever possible. Failure to do so could lead to an unexpected situation becoming an unfortunate reality down the line.

Similarly, dirt can contain soil dwelling parasites which, although not necessarily all that dangerous for adult dogs, can make them sick or negatively affect their overall quality of life.

For example, tapeworms are by far the most common parasites and are typically spread via the contamination of soil and grass.

Unfortunately, they are not the only parasite that can be spread in this way. Hookworm larvae live in soil and unlike tapeworms, the presence of these worms in puppies can often prove fatal.

Handy Hint: Dogs don’t just like to eat dirt, then also love rolling in mud. The reason they roll in mud might actually surprise you though.

How do you stop your dog from eating dirt?

If you want to stop your dog from eating dirt, you should first remain calm and patient with them. Although it can be all too easy to shout at your dog, it will not help the situation in the long run.

Instead, you should remain calm and ask yourself if this is a common behavior for your pup or whether it is a one-time occurrence.

If you conclude that your dog’s habit of eating dirt is severe and is happening daily, then you should think about calling a vet or a local dog behaviorist.

Sometimes, as owners, we need to step back and allow the professionals to help our dogs instead of us trying to fix it. However, if your dog is only eating dirt occasionally then there are a few things you can try yourself.

First and foremost, breaking your dog’s attention when they are eating dirt can go a long way in helping to curb the behavior. For example, you can try distracting them with a ball or other fun activity that they love.

After doing this regularly, your dog may begin to stop its habit of eating dirt entirely. To further expand on this, you can reward your dog with treats whenever they choose a different activity instead of digging around in the soil.

Hopefully, with some persistence, this will be enough to nip the unhealthy habit in the bud.

Another thing to keep in mind is how much exercise your dog is getting. Occasionally, dogs will get into plant pots or flower beds if they are bored.

If you notice your dog is eating dirt whenever they are at home for extended periods, try taking them out for an extra walk. Sometimes the extra energy depletion can be enough to stop any unwanted behaviors.

After all, a tired dog is a happy dog.

Lastly, you can try controlling your dog’s environment. If there are multiple plant pots at your dog’s nose level, try moving them to an area where they cannot reach them.

Likewise, if there is one spot in the yard that your dog is constantly eating dirt from, consider covering the area. If you have a yard with lots of flower beds, think about supervising your dog whenever they go outside.

Your dog might also love the reaction they get when they eat dirt from houseplants or outdoor soil. If you come in the room shouting and screaming at them, then it could be game on and something they think it fun.

When left to their own devices, most dogs will try everything in their doggie power to get an extra meal or at least some small morsel off their human’s plate, often vacuuming the floor after mealtimes.

At the worst, they may even try to steal food from kitchen counters, or other dogs or pet’s food bowls, sometimes causing friction in the home.

Dogs do like to eat the strangest of things. Here are some other weird reports: