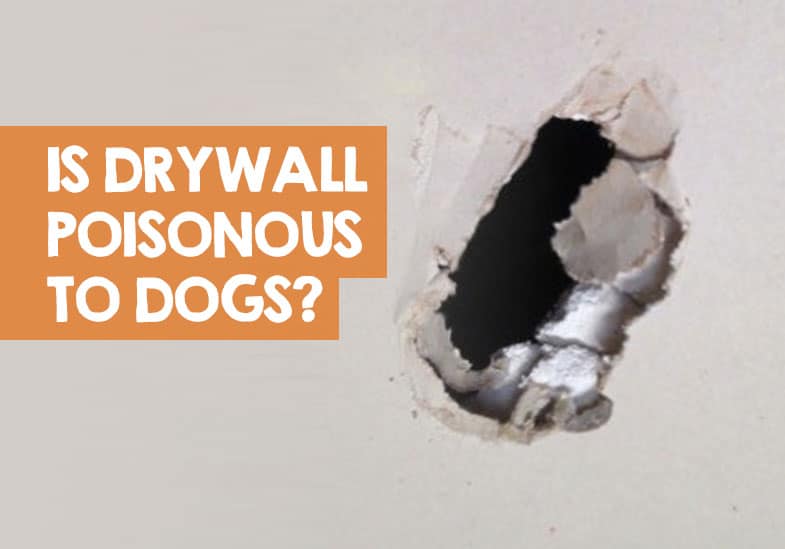 Dogs can do the weirdest things: from eating your favourite shoe to drinking out of the toilet or dragging their butts along the floor! But one of the oddest things I have seen is our French Bulldog chewing holes into the drywall – and from my research, he’s not the only one!

With drywall being readily available and present in more or less every property in the country, it’s no surprise that it’s a common issue. It could be that your dog ate a small amount of drywall, licked some of the dust, or ate a chunk out of the wall – so what are the risks and how poisonous is drywall to dogs?

Understandably this can cause a lot of panic amongst owners. In this guide I want to put some of those concerns to rest and explain what to do it your dogs does eat drywall.

Disclaimer: Everything you read here is a result of what I have personally researched. You should always consult with your vet if your dog eats anything unusual.

Is drywall poisonous to dogs? Standard drywall itself isn’t known to be toxic and poisonous to dogs. However, drywall can be poisonous to dogs if the wall contains asbestos or can cause blockages internally. There have also been reports of Chinese manufactured drywall from 2001 to 2009 being contaminated with toxic elements.

The bottom line is this; drywall does not contain poisonous elements, unless it’s the Chinese drywall (read more on Wikipedia) which was estimated to have been used in 100,000 homes in the United States.

But what about the dust that kicks up from drywall and plaster? Can this harm your dog?

Well, yes, and no. Let me explain why…

Drywall dust particles have a variety of microscopic elements to them. Whilst the dust is not known to be poisonous, if inhaled in large quantity, can cause problems.

For example, with asthmatic humans, or those with propensity for allergic reactions, you would not want drywall dust in your eyes and mouth – for obvious reasons. And it’s the same with dogs.

Dogs that inhale a large cloud of drywall dust, or even a little, could be sick. The reaction could be more intense in dogs who have existing health issues.

As with anything, if your dog has taken in drywall dust, they could be sick as their body’s way of getting rid of the irritants to their throats and stomach.

Handy Hint: I’ve put 14 tips together which explain how you can stop your dog from eating and destroying drywall.

Is it bad for dogs to eat drywall?

If your dog ate drywall mud or chunks, the majority of the time they should be ok. Drywall isn’t poisonous – unless it has asbestos in it or is the rogue Chinese batch from the early 2000s.

But that doesn’t mean you dog won’t get ill or even die after eating drywall. For example, I found this tragic Facebook post in a group I am in:

“I’ve heard that drywall is non-toxic and isn’t poisonous to dogs, but this is what happened to us. We have a wall in our apartment that was damaged our kids, putting a small dent in the drywall. My Labrador puppy saw the dent, chewed into it, swallowed some chunks of drywall. His stomach swelled up and he was dead a week later.”

Whilst the poster of this comment didn’t explain the actual cause of death according to the vet, other commenters drew some conclusions.

Here’s a selection of the best replies:

“It’s very common for dogs to eat drywall and most will just have an upset stomach. Drywall is an irritant to the digestive system, but should not kill a dog, unless they suffer and internal obstruction and blockage. Alternatively, it could be that the dog was allergic to a chemical component or was at risk of bloating already.”

“It sounds like it could have been an allergic reaction to drywall, or it could have even been something he ate before eating the drywall. It could have been Chinese drywall which I’ve heard is poisonous to dogs, or if an older house perhaps asbestos or lead in an old paint job?”

“I suspect it could be that your dog has eaten some toxic Chinese drywall. My uncle was buying a house in Seattle but found out before he moved in that the walls were Chinese drywall throughout. He had to have the place gutted and re-done as it’s toxic to humans, so must be poisonous to dogs too.”

As far as I can tell, most of the time eating drywall won’t be bad for your dog as there are no toxic elements. However, in some rare cases it can cause serious harm to your dog and provoke a serious reaction, for example:

If you suspect your dog has eaten any form of drywall including inhaling the dust, please do consult with your vet immediately. Symptoms can include lethargy, difficulty breathing and excessive coughing.

I would always err on the complete side of caution as you never know if eating drywall is going to be bad for your dog or not.

My dog ate a small amount of drywall

Personally, I would imagine your dog will be fine if they eat a small amount of drywall, but as with the rest of this research, please play safe.

Never take any risks, and always consult with a professional if your dog eats anything not intended for their diet.

Why is my dog eating drywall?

There are many reasons why your dog might feel compelled to eat drywall – some of the most common ones are listed below.

If there’s a stimulus in the room that frightens or startles your dog, their response will be to escape – especially if the door is locked. They will attempt to chew and make a hole in the drywall in order to escape the room, and by extension anything that frightens them.

Sudden loud noises like fireworks and other fearful situations can all lead to your dog trying to chew to escape, even if the thing that scares them is no longer present. This is because they associate feelings of fear and anxiety with that room.

So, if removing the fear-causing stimulus doesn’t work, try putting them in different room with their favourite things.

Although you might not want to consider this (especially if you’re squeamish), it’s actually quite common for various critters to make themselves at home inside your walls. Some of these creatures include rats, mice, crickets or even snakes, lizards and termites!

Your dog’s sense of smell as well as their hearing are far more advanced than ours. These heightened senses coupled with their hunting instincts mean they are a lot more likely to notice a living thing in the wall than you are.

That might lead to your dog chewing through the drywall in order to get to whatever they sense is lurking in your walls.

The only way to deal with this is to get pest control in to help clear your house, or by training your dog to be less led by their hunting instincts and high prey drive.

If your dog has a lot of excess energy deriving from a lack of exercise, play or interaction, that might manifest in destructive behaviour patterns.

If they haven’t got any toys and haven’t had a chance to expel their energy, they might end up chewing through drywall simply for something to do.

The best way to tackle this is by ensuring your dog is properly stimulated!

If you’ve left your dog inside a room whilst you’re going out; or even if you’re just going into a different room, they might be fearful of being separated from you and might try to chew through the drywall in order to find you and become closer to you.

To deal with this, take your dog to a specialist trainer to help them manage their separation anxiety.

Pica is a condition some dogs get that compels them to eat inanimate objects such as drywall. Although pica is sometimes caused by an underlying medical issue or malnutrition, it is primarily a behavioural and psychological issue.

In order to treat your dog for pica, it is best to see a vet and a specialist dog trainer.

There is no easy way to solve this but giving them more attention in general may solve the problem – it shows them that they don’t need to go to extremes like eating drywall in order to be noticed by you.

Handy Hint: If you see your dog pressing his head into your wall without the chewing, then it could be the sign of a serious neurological condition – read more here.

As with anything not designed for a dog’s diet, avoid, avoid, and avoid. Whilst drywall doesn’t appear to be poisonous to dogs, it’s not something you would want your puppy to be eating.

If your dog has eaten drywall, or breathed in lots of drywall dust, please check in with your vet to be same – even if it was a small amount.

Risks aside, your dog eating drywall is often indicative of a underlying issue that you should explore and resolve if you want to keep your walls intact!

I love writing about what dogs can and can’t eat based on what I research. Here are some of my latest articles on this topic.