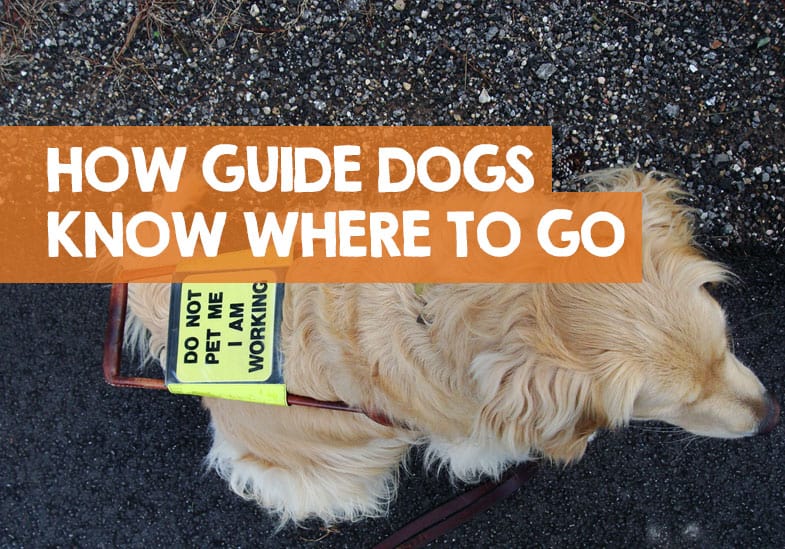 We all can appreciate how amazing guide dogs are and the intelligence they must have. But even so, it’s hard to truly grasp how guide dogs know where you want to go, when to cross a road, or even which bus to get on.

If you have ever wondered what it is the makes guide dogs so special and how they know which way to turn, stop, and proceed, then please read on.

How do guide dogs know where to go? Guide dogs do not know where to go most of the time and rely on the instructions of the owner handler. However, some guide dogs will have practised routes and understand familiar places so will go that way and ensure the way is clear and safe to proceed.

There’s a bit more to it than that, so here’s the long answer with more detail on how guide dogs know which way to go.

How do guide dogs know where you want to go?

Guide dogs will work closely with their handler to get from point A to point B. The dog will be introduced to the route, either by the handler or the sighted trainer. Once the handler and dog are both familiar with the route, they can travel by themselves.

This is usually the path to work, or to the grocery store that the person often frequents.

The human will communicate with the dog through hand and verbal cues. The dog will be listening for directions from its owner. It will not be able to distinguish the path to a new route, but they can listen for directions such as “right”, “left”, and “forward.”

The dog will be focusing to make sure that there are no obstacles in the way. This could include elevated ground, fallen tree branches, or speeding cars.

And in simple terms, this is how guide dogs know where to go safely, such as crossing roads and getting on buses.

How do guide dogs know when to cross the road?

Guide dogs will then know where to go and will lead their handlers out of the way or come to a stop if they recognize potential danger. For instance, guide dogs will stop and sit, blocking the handler when they come to the edge of a sidewalk when crossing a road/

This then lets the handler will listen to cars and the auditory signal from the traffic light. They will then tell the dog when it is safe to cross the road.

How do guide dogs know which bus to get on?

Guide dogs don’t recognize numbers on buses, but what they do understand and learn is where the right bus stop is. They dog might even recognize a friendly bus driver.

Do guide dogs know their owners are blind?

Researchers are not 100% sure whether dogs know that their owners are blind; however, the hypothesis is that they do not.

There was a study performed in 2008 published in Animal Cognition that examined how seeing-eye dogs asked their owners for food. A regular dog will typically look at their food bowl and then back at their owners when they are hungry.

According to the study, guide dogs do the same thing. After a while of doing this, guide dogs would often add noises such as licking their lips to get their owner’s attention. They seemed to realize that auditory signals were more effective than visual ones.

The bond between guide dogs and their owners is very strong, and they will eventually learn how to communicate their needs to each other in whichever way works for them.

Guide dogs begin their formal training at a very young age. When a puppy is about two months old, it will be removed from its mother to be raised with a foster family or trainer. The puppy will be getting used to day-to-day activities and human interaction.

At the same time, the puppy will be taught things like toilet training, socialization, obedience, and leash training. The puppy will need to be exposed to potentially uncomfortable scenarios such as large crowds to ensure that they understand how to keep calm.

During this time, the dog will also be watched to ensure that it is intelligent, friendly, a quick learner, and brave. Otherwise, the dog will have difficulty with the later parts of training and they will not make a good guide dog.

On average, about half the puppies that are born to be guide dogs make it to the final stage of training. They will become the ones who will know where to go with their eventual owner.

The rest of the dogs are put up for adoption to other families.

At the age of one year, the dog should have mastered all the basic skills. They will then move to a guide dog training facility. For the next five to eight months, the dogs are trained to have excellent manners, such as sitting underneath their owner’s table at a restaurant.

They are also taught to ignore temptations such as squirrels, other dogs, and unfamiliar people.

In addition to this, guide dogs are also instructed to disobey dangerous commands. For instance, if their handler indicated that it was safe to cross the street when there is still traffic, the dog would refuse to move.

This training is achieved through a positive reinforcement system of praise and treats when the dog does something correctly. Verbal and collar cues are also utilized so that the dog understands which position the handler wants them to be in and where to go and when.

Near the end of their training, the dogs are matched with their handler. The dog and handler are taught to work together so that they understand each other better. The dog learns to recognize the handler’s voice, and the handler gets used to the role that the dog will play in their safety.

The pairing process is very important. The person’s lifestyle, hobbies, and living arrangements get factored into consideration with the dog’s personality to ensure it is a good match.

Usually, at this point, there is a two-week period where the dog and human bond. This is when the human would take the dog through a typical daily routine to make sure that everything will work smoothly between them. After that, the dog will be taken to its new home with its handler.

Handy Hint: According to research, dogs can recognise up to 200 words, including of course, their own name.

Some breeds make better guide dogs than others and will be the best at knowing where and when to go with the owner. Here’s a list of the top guide dog breeds.

Golden Retrievers are incredibly intelligent dogs and pick up on new information very quickly. They can remain focused on a task and they are a good size for safely leading a person. These dogs are also loyal companions and will gladly stay by their handler’s side.

Labrador Retrievers are very similar to Golden Retrievers as they are intelligent, easily trainable, and loyal. They are also gentle dogs but strong enough to stop their handler from walking into a dangerous situation.

Labrador Retrievers are also known for their ability to remain calm, even in stressful situations. They will remain focused and guide their handler out of harm’s way.

A German Shepherd guide dog will be quite devoted to their handler. They are also able to adapt easily to uncomfortable situations. German Shepherds require a lot of exercise, so they are best suited to an individual who is active or spends a lot of time outdoors.

German Shepherds look more intimidating than other breeds, which will reduce the chances that a stranger will try to pet or distract them when they are working.

Poodles are much smarter than many people give them credit for. They will proudly and reliably carry out their roles as a guide dog. They love to make their owners happy, as they are a people-pleasing breed of dog. Poodles are also hypoallergenic, which is beneficial to some individuals.

Labradoodles are a gentle breed of dog that develops a deep bond with their owners. Due to this, they will be eager to walk alongside their handler every day.

Like Poodles, Labradoodles are a hypoallergenic option for individuals with allergies.

A guide dog is easily recognizable in the street, as they will typically be wearing a vest or harness and leading their handler. These amazing dogs are trained to work directly with their handler and take responsibility for their safety when they are outside.

Guide dogs are used to lead blind or visually impaired people and help them do things such as board public transportation, navigate obstacles, and locate doors to enter or exit buildings.

But guide dogs don’t know where to go unless they have been trained to follow a familiar and well-rehearsed route. They also don’t know which bus to catch if there are more than one to pick from. Guide dogs and their handlers work in a partnership.