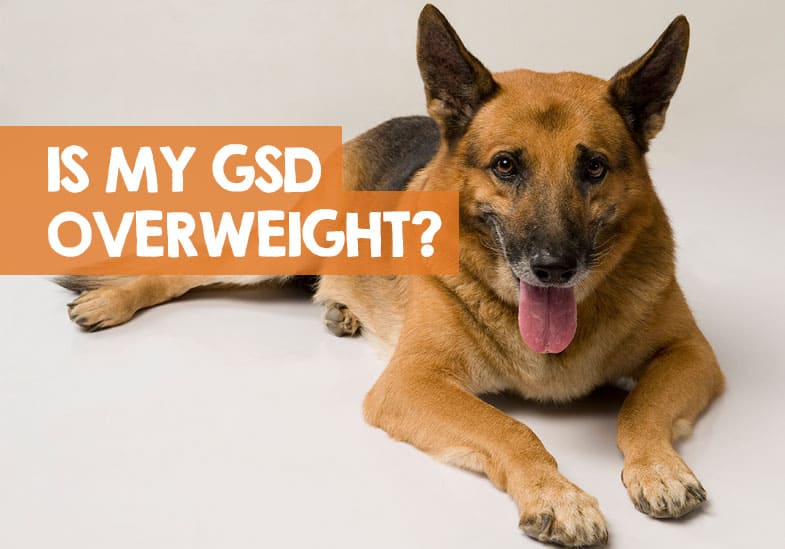 German Shepherds are notoriously full of energy and can be the perfect dog for family and singles alike. With an even-temper, and not typically timid, they have very balanced characters. But like all dogs, German Shepherds can get overweight if not cared for properly.

As you can imagine, given their high energy levels, German Shepherds can be prone to overeating and associated weight issues. If these are not monitored properly, your GSD’s spiral out of control and lead to health issues later on in life.

But how does this torso check work, and how do you do it?

It’s quite simple; here’s how you can tell if your German Shepherd is overweight and you don’t have scales.

Apply a little pressure to your German Shepherd’s chest and you should be able to feel their ribcage. This is how you know they are of an optimum weight. If you can barely feel the ribs at all, this is a fair indication that your German Shepherd is overweight.

What weight should a German Shepherd be?

I’ve already covered this briefly, but just to confirm, a health German Shepherd who is not overweight should fall into the following weight ranges:

As well as taking a German Shepherd’s gender into account, you should also consider their height in comparison to their weight. Broadly, a male German Shepherd height ranges on average between 24 to 26 inches, and 22 to 24 inches in height for females GSDs.

You should also consider other factors such as German Shepherds that are considered runts of the litter that may well never reach the maximum height. Consequently, you can expect smaller-than-average German Shepherds to weight a little less than the recommended guidelines.

Ensuring your German Shepherd remains a healthy weight may be challenging at times, but it is possible and helps to ensure your four-legged companion has a long, healthy and happy life.

This guide to ensuring your German Shepherd doesn’t become overweight will explain some of the ways you can help to make that happen.

How much should a German Shepherd weigh at 3 months?

How much should a German Shepherd mix weigh?

You should consult with your vet as they will be able to take the weight of both mixes and then give you an ideal weight limit your German Shepherd mix should be.

More ways to tell if your German Shepherd is overweight

As well as weighing them and checking their upper-torso area, there are several ways to check whether or not your dog is piling on the pounds that doesn’t involve a visit to the vets.

It’s the same with their spine: if you see it, that means they’re too thin, but you should be able to feel the spine of a healthy German Shepherd with ease, because it should ideally only be covered by a thin layer of fat.

German Shepherds of a healthy weight should also have a visible waistline that is slightly smaller than their chest, and the base of their tail should have a small layer of fat that is smooth to the touch.

2. Their body has no definition

German Shepherds are supposed to have a lean and athletic build. This is why, at a healthy weight, you should be able to feel their ribcage and spine.

So, if your German Shepherd is looking a bit chunky or you are unable to feel their ribcage or spine under all the fat, you need to put them on a diet.

3. They get tired and overexerted easily

When German Shepherds are out of shape and overweight, they will become fatigued after just a few steps, panting a lot or wanting to stop already only minutes into your walk.

If this seems to be happening more often than it should, and you can rule out other external factors (such as hot weather) as being the cause, it is time to consult your vet about a diet and exercise plan.

4. They struggle to groom themselves

If your German Shepherd can’t reach behind their ear to itch their scratch or don’t seem to have the flexibility necessary to bite or groom themselves, this is a clear indication that they need to go on a diet due to being overweight.

Handy Hint: If your female GSD is gaining weight quickly make sure to rule out pregnancy. Here are the signs of pregnancy that show in German Shepherds.

Why are German Shepherds more prone to weight-gain?

When it comes to mealtimes, most dogs are able to self-regulate, and stop eating after a certain point once they’re full up or have enough food to maintain their energy levels.

However, German Shepherds are one of the few dog breeds that do not possess that ability of knowing when to stop – if left to their own devices, they could possibly even eat themselves to death.

German Shepherds love food and will eat pretty much anything, but they don’t know where to stop. Their owners need to remain extra vigilant in order to ensure that they do not overindulge and end up harming themselves as a result due to being overweight.

Owners need to keep mealtimes to twice a day with controlled, limited portions in order to ensure the wellbeing of their dog – and certainly avoid any foods bad for German Shepherds.

As well as this, German Shepherds, especially when they approach a more senior age, tend to be a lot less active when they get older.

If left to their own devices, they will run around and play a lot less than is healthy for them, and as with humans, this lack of exercise contributes to them gaining weight.

Handy Hint: Whilst your German Shepherd might be very manic now, he could start to calm down in the future.

If you choose a German Shepherd as your pet, rest assured that you have gained an adoring best friend for life! It’s clear to see that for German Shepherds, being your companion is in their DNA.

However, that doesn’t mean that owning a German Shepherd comes without some challenges to overcome.

Although German Shepherds might be more prone to weight gain to other breeds if kept inactive, this doesn’t have to be a problem provided owners are vigilant in their care and regularly assess and check their German Shepherd for signs of weight gain.

On the whole, as long as you don’t feed your German Shepherd more than twice a day and ensure that they get the optimum amounts of exercise, they should be fine.

If you have any concerns about your German Shepherd’s weight, it isn’t the end of the world, either. It is just something to discuss with your vet to make sure your dog has a happy, fulfilling and healthy life.

There are certain foods your German Shepherd should never eat, as they can be toxic to them. See what they are on the link below.