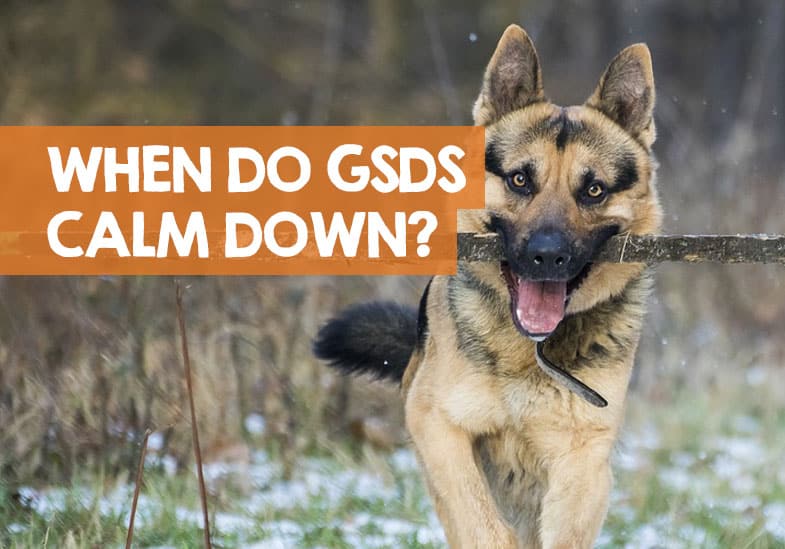 As a dog walker who frequently looks after a couple of German Shepherds, I can tell you first-hand that they are excitable and hyper dogs. Whilst all dogs are unique, German Shepherds are certainly on my list of the more hyperactive breeds… and if you own one, you might be wondering when your German Shepherd is ever going to calm down.

Are German Shepherds calm dogs? I would say German Shepherds are not calm (as a sweeping generalisation). This is primarily because they are bred to be working dogs, which means they are literally built for chasing, catching, herding and other high levels of athletic activity.

This means that naturally, German Shepherds have a lot more energy than your average dog and, as a result, are a lot more hyperactive and quite low down on the calm scale.

German Shepherds aren’t always hyper though and some can be calm… but there are a lot of facets involved. For example, a German Shepherd’s level of hyperactivity will vary dramatically depending on their age.

When do German Shepherd puppies calm down? When a German Shepherd reaches the one year old, you should expect them to calm down a lot over the subsequent 6 to 12 months. Although your German Shepherd may continue to be hyper after two years, it will never be to the same extent of them in their adolescent age. Again, this is a generalisation.

To learn more about the average German Shepherd’s hyperactivity and the best ways you can calm them down, and whether neutering them can have an effect, read on!

There are many reasons why your German Shepherd might seem overly hyperactive, but some of the most common factors and causes are listed below.

German Shepherds are an interesting breed, because whilst they can physically mature very quickly, but inside they’ve still got the mind of a puppy!

It can take some time for your German Shepherd’s mental maturity to catch up with their physical maturity, and a lot of the time your dog might be full of seemingly limitless energy because they have not yet fully developed the capacity to self-regulate their energy levels.

At this age, your German Shepherd will be very excited and fascinated by everything. They’ll be moderately hyper, but will have a significant lack in focus, and it isn’t uncommon for them to be full of energy one minute and crashing the next during this stage of development.

This is probably the age where your German Shepherd will be the most hyper it will ever be. It will have a lot of pent-up energy, so it is important that they have plenty of opportunity to healthily release it via exercise or playtime. If not, you risk instilling harmful behaviour patterns.

But, with patience and plenty of means to healthily expel of excess energy, you can feel assured that at this stage, your German Shepherd will calm down considerably.

Another notable benchmark many German Shepherd owners mention is around two and a half years. This should be the time where the mental development starts to match up with the physical development of your dog, meaning that now they can be considered as fully being in the ‘adult’ stage.

This is the stage at which a German Shepherd can be considered as being a senior dog. When they get to this age, they will be a lot more inclined to relax and snooze as opposed to charging around, but you should still keep up with their exercise.

As we have seen from the above, the key to controlling a hyperactive German Shepherd is routine – this can have a huge calming effect. Their routine should involve plenty of exercise that not only challenges their body and keeps them from getting overweight, but stimulates their mind too.

German Shepherds should have 90 minutes of exercise each day as well as more intense cardio exercises 1 to 2 times a week (you will need to bathe them a lot at first!). If your walks are shorter or you’re skipping out on the cardio, it is likely that your German Shepherd isn’t expelling as much energy as it needs to, which then manifests in more hyperactive behaviour.

The same can be said, in turn, for a lack of mental stimulation. German Shepherds, as hunting hounds, are incredibly intelligent creatures. Subsequently, if they aren’t intellectually challenged, they will get hyper and restless and won’t calm down easily.

This should be done regularly, and with the right combination of physical and mental exercise, you will most likely see an improvement in your German Shepherds’ behaviour and temperament.

All dogs need love, and German Shepherds are especially affectionate, widely renowned for their good temperament and status as the ideal family dog. It is important to take the time to play with your German Shepherd, even if it’s a quick game of fetch for fifteen minutes or a few cuddles and treats.

If your German Shepherd feels lonely or isolated, they might begin to develop unhealthy behaviour patterns such as hyperactivity, as if they barely get any time with you, when they eventually do, they’ll likely get overexcited and overwhelmed.

Also known as canine ADHD (read more on the US National Library), this condition is rare in dogs but may well be the case if your German Shepherd is inexplicably hyper.

So, if your German Shepherd is always hyper, and these behaviours are displayed alongside some of these other seemingly inexplicable symptoms, it is a good idea to take them to the you’re your vet will be able to diagnose and treat with a combination of medication and specialist training.

How to calm down your German Shepherd

If your German Shepherd is always hyper, here’s what to do. There are several steps you can take in order to tackle that behaviour in a positive, long-term manner.

Did You Know? There are certain characteristics in the GSD breed that make them the best police dogs.

Do German Shepherds calm down after neutering?

There’s a common belief that German Shepherds calm down after neutering. Whilst there is some degree of truth to this statement, it’s not always the case. It will depend on the age they get neutered, and what behaviours they might have already learned to enjoy.

The reason the answer isn’t as clear cut as you might think, we need to understand the effects of neutering. Not only does the removal of the male German Shepherd’s testicles render him infertile, but it will also prevent him from producing testosterone.

A German Shepherd with no testosterone can display some subtle behavioural changes. But that doesn’t mean he will necessarily get calmer, and here’s why…

At around 6 months old, the testosterone levels in a male German Shepherd puppy will rise dramatically. This can lead to behavioural issues such as:

Based on that, you would assume that by neutering your German Shepherd, he should calm down. That would make to sense anyone reading this, but it’s a little more complicated than that.

For example, if you neuter a German Shepherd before he hits the puberty stage where the testosterone levels jump, it’s probable that he won’t exhibit the issues listed above.

However, if you neuter your German Shepherd after this point, he will have learned those behaviours, and possibly found them fun and exciting. As a result, even after neutering and with a lack of testosterone, he could still exhibit these behaviours, rather than calming down.

But, it’s still important to understand that your hyper German Shepherd could be acting the way he is due to his libido. And this is one thing that neutering will definitely have a calming effect on – no matter what the age of your dog.

It’s unlikely that your German Shepherd’s personality will be changed dramatically. He is probably still going to be a happy dog but could still display hyper tendencies!

So, to conclude, neutering can calm a German Shepherd down sometimes and if the hyper behaviour is related to sex drive and if done before a puberty. However, if neutering is done at an older age, their hyper habits could be harder to break!

Handy Hint: Some dogs will nip at you when excited, here’s how to stop it.

With their fast-going and hyperactive nature, German Shepherds need owners who are patient and who can keep up.

Although it can be intense looking after a German Shepherd sometimes, you just need to be resilient, receptive and have faith that things will calm down as and when they get older.

You can read all about German Shepherds in this section, or choose some of the most popular content on this breed.